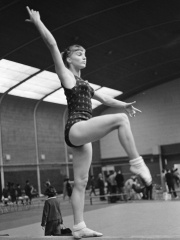 Larisa Leonidovna Petrik (Russian: Лариса Леонидовна Петрик; born 28 August 1949) is a former Soviet gymnast and Olympic champion. Petrik competed at the 1966 World Championships where she shared in the team silver medal (gold went to the Czechoslovaks) and earned an individual bronze medal on the beam. She also competed at the 1968 Summer Olympics in Mexico City, where she received a gold medal in floor exercise (shared with Věra Čáslavská), a gold medal in team combined exercises, and a bronze medal in balance beam. Read more on Wikipedia

Among gymnasts, Larisa Petrik ranks 60 out of 181. Before her are Mikhail Voronin, Oswald Holmberg, Per Bertilsson, Erzsébet Gulyás-Köteles, Gösta Åsbrink, and Adolf Spinnler. After her are Svetlana Khorkina, Bart Conner, Shuji Tsurumi, Vitaly Scherbo, Ecaterina Szabo, and Yelena Shushunova.

Among GYMNASTS In Russia