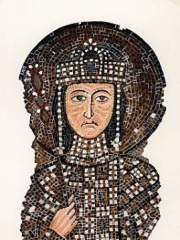 Anna Komnene (Greek: Ἄννα Κομνηνή, romanized: Ánna Komnēnḗ; 1 December 1083 – 1153), commonly Latinized as Anna Comnena, was a Byzantine princess and author of the Alexiad, an account of the reign of her father, the Byzantine emperor, Alexios I Komnenos. The Alexiad is the most important primary source of Byzantine history of the late 11th and early 12th centuries. Although she is best known as the author of the Alexiad, Anna played an important part in the politics of the time and attempted to depose her brother, John II Komnenos, as emperor and seize the throne herself.At birth, Anna was betrothed to Constantine Doukas, and she grew up in his mother's household. Read more on Wikipedia

Anna Komnene was a Byzantine princess who lived from 1083-1148. She was the daughter of Emperor Alexios I Komnenos and Empress Irene Doukaina. Anna is most famous for her writings, which include the Alexiad, a history of her father's reign.