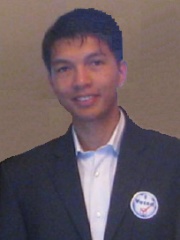 Andry Nirina Rajoelina (Malagasy: [ˈjanɖʐʲ nʲˈrinə radzoˈel]; born 30 May 1974) is a Malagasy politician and businessman who is currently serving as the president of Madagascar. He started his career in the private sector, first organizing events on the Island (Live concerts), and then investing the advertising business (Injet, billboards and print) and the media (Viva, TV and radio). He was the Mayor of Antananarivo from December 2007 to February 2009, and President of the High Transitional Authority of Madagascar from 21 March 2009 to 25 January 2014, up until the general elections were held in 2013. After stepping down as President of the HAT, he remained head of the majority party, the MAPAR. Read more on Wikipedia

Since 2007, the English Wikipedia page of Andry Rajoelina has received more than 412,307 page views. His biography is available in 43 different languages on Wikipedia making him the 10,171st most popular politician.