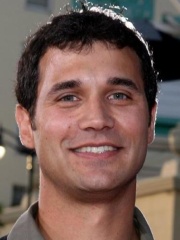 Ramin Djawadi (, Persian: رامین جوادی‎, born July 19, 1974) is a German score composer. He is known for his scores for the 2008 Marvel film Iron Man and the HBO series Game of Thrones, which were nominated for Grammy Awards in 2009, 2018, and 2020. He has scored films such as Clash of the Titans, Pacific Rim, Warcraft and A Wrinkle in Time, television series including Prison Break, Person of Interest, Jack Ryan, and Westworld, and video games such as Medal of Honor, Gears of War 4, and Gears 5. Read more on Wikipedia

Since 2007, the English Wikipedia page of Ramin Djawadi has received more than 3,159,710 page views. His biography is available in 40 different languages on Wikipedia making him the 712th most popular composer.

Among composers, Ramin Djawadi ranks 712 out of 1,008. Before him are Friedrich Wilhelm Zachow, Julius Röntgen, Alexei Lvov, Per Nørgård, Koichi Sugiyama, and Boris Lyatoshinsky. After him are Oskar Merikanto, Andrzej Panufnik, Peter Benoit, Sigismondo d'India, Nie Er, and Isaak Dunayevsky.