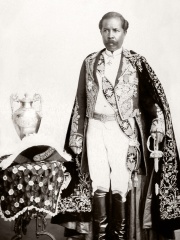 Rainilaiarivony (30 January 1828 – 17 July 1896) was a Malagasy politician who served as the prime minister of Madagascar from 1864 to 1895, succeeding his older brother Rainivoninahitriniony, who had held the post for thirteen years. His career mirrored that of his father Rainiharo, a renowned military man who became prime minister during the reign of Queen Ranavalona I. Despite a childhood marked by ostracism from his family, as a young man Rainilaiarivony was elevated to a position of high authority and confidence in the royal court, serving alongside his father and brother. He co-led a critical military expedition with Rainivoninahitriniony at the age of 24 and was promoted to commander-in-chief of the army following the death of the queen in 1861. Read more on Wikipedia

Page views of Rainilaiarivonies by language

Among politicians, Rainilaiarivony ranks 8,860 out of 15,710. Before him are Melusine von der Schulenburg, Duchess of Kendal, Marco I Sanudo, Amir Peretz, Xiang of Xia, Nicholas Orsini, and Igor Matovič. After him are Neheb, Randolph Churchill, Sayf al-Dawla, Nikephoros I Komnenos Doukas, George M. Dallas, and Étienne Tshisekedi.