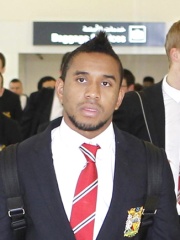 Anderson Luís de Abreu Oliveira (born 13 April 1988), commonly known as Anderson, is a retired Brazilian footballer who played as a midfielder. He is best known for his tenure with Manchester United. Born in Porto Alegre, he began his career with Grêmio, joining the youth team before rising through the ranks. His goal against Náutico during the 2005 play-offs earned Grêmio promotion to the Brazilian Série A. Read more on Wikipedia

Since 2007, the English Wikipedia page of Anderson has received more than 185,858 page views. His biography is available in 49 different languages on Wikipedia making him the 2,644th most popular soccer player.

Page views of Andersons by language