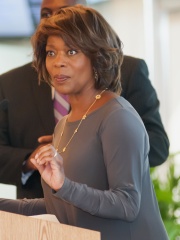 Alfre Woodard (; born November 8, 1952) is an American actress, producer, and political activist. Considered one of the most versatile and accomplished actors of her generation, she has received four Primetime Emmy Awards, a Golden Globe Award, and three Screen Actors Guild Awards, in addition to nominations for an Academy Award and two Grammy Awards. In 2020, The New York Times ranked Woodard seventeenth on its list of "The 25 Greatest Actors of the 21st Century". Read more on Wikipedia

Among people born in 1952, Alfre Woodard ranks 137. Before her are Mahmoud Jibril, David A. Stewart, Fatos Nano, Per Petterson, Amir Peretz, and Anote Tong. After her are Jean-Dominique Bauby, Vasco Rossi, David Knopfler, Jung Chang, Freddy Maertens, and Masaki Yokotani.