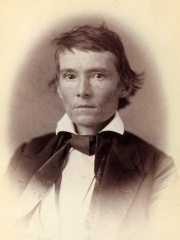 Alexander Hamilton Stephens (February 11, 1812 – March 4, 1883) was an American politician who served as the vice president of the Confederate States from 1861 to 1865, and later as the 50th governor of Georgia from 1882 until his death in 1883. A member of the Democratic Party, he represented the state of Georgia in the United States House of Representatives before becoming governor. Stephens attended Franklin College and established a legal practice in his home town of Crawfordville, Georgia. Read more on Wikipedia

Since 2007, the English Wikipedia page of Alexander H. Stephens has received more than 790,089 page views. His biography is available in 22 different languages on Wikipedia making him the 11,065th most popular politician.

Among politicians, Alexander H. Stephens ranks 11,002 out of 14,801. Before him are John Warner, Konstantinos Tsaldaris, Georgios Theotokis, Ariarathes I of Cappadocia, Juan Esteban Pedernera, and Manuel Quintana. After him are Benedikt Sigurðsson Gröndal, Pierre Buyoya, Robert, 1st Earl of Gloucester, Theo-Ben Gurirab, Muhammad V of Kelantan, and C. R. Swart.