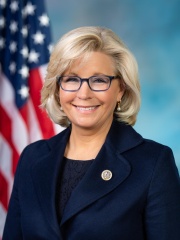 Elizabeth Lynne Cheney ( CHAY-nee; born July 28, 1966) is an American attorney serving as the U.S. Representative for Wyoming's at-large congressional district since 2017. Cheney is the House Republican Conference Chair, the third-highest position in the House Republican leadership. She is the third woman elected to that position after Deborah Pryce and Cathy McMorris Rodgers.Cheney is the elder daughter of Lynne Cheney and former Vice President Dick Cheney. She held several positions in the U.S. State Department during the George W. Read more on Wikipedia

The New Yorker
Republicans Accuse Liz Cheney of Reading Constitution
Andy Borowitz jokes that other Republicans in the House of Representatives are furious with the Wyoming congresswoman Liz Cheney because she actually read the U.S. Constitution, as she mentioned when she explained why she was voting to impeach President Donal…
Andy Borowitz
Boing Boing
Liz Cheney, No. 3 House Republican says she will vote to impeach Trump — there's 'never been a greater betrayal' by a president
A career-defining move by the daughter of Dick Cheney, who today says she'll vote to impeach Donald Trump over the January 6 terror attack on the U.S. Capitol. Republican conference chair Liz Cheney – the number 3 Republican in Congress: "The President …
Xeni Jardin
BuzzFeed News
Republican Liz Cheney Says She'll Vote To Impeach Trump: "There Has Never Been A Greater Betrayal By A President"
Cheney, the daughter of former vice president Dick Cheney, is the third most powerful Republican in the House of Representatives.View Entire Post ›
David Mack
Upstract.com
Liz Cheney will vote to impeach Trump
The House plans to hold an impeachment vote Wednesday, as Trump rejected any blame for the deadly riot at the Capitol.
editors