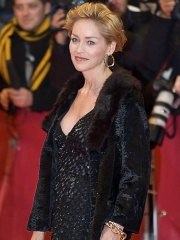 Sharon Vonne Stone (born March 10, 1958) is an American actress, producer, and former fashion model. She is the recipient of a Primetime Emmy Award and a Golden Globe Award, as well as having received nominations for an Academy Award and two Screen Actors Guild Awards. After modelling in television commercials and print advertisements, she made her film debut as an extra in Woody Allen's comedy-drama Stardust Memories (1980). Read more on Wikipedia

Since 2007, the English Wikipedia page of Sharon Stone has received more than 9,721,756 page views. Her biography is available in 68 different languages on Wikipedia making her the 190th most popular actor.