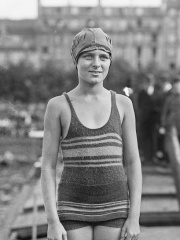 Aileen Muriel Riggin (May 2, 1906 – October 17, 2002), also known by her married name Aileen Soule (also Aileen Riggin Soule), was an American competition swimmer and diver. She was Olympic champion in springboard diving in 1920 and U.S. national springboard diving champion from 1923 to 1925. After retiring from competitions, she enjoyed a long and varied career in acting, coaching, writing and journalism. Read more on Wikipedia

Since 2007, the English Wikipedia page of Aileen Riggin has received more than 24,152 page views. Her biography is available in 15 different languages on Wikipedia making her the 12,072nd most popular swimmer.