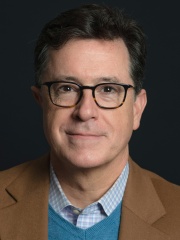 Stephen Tyrone Colbert ( kohl-BAIR; born May 13, 1964) is an American comedian, writer, producer, political commentator, actor, and television host. He is best known for hosting the satirical Comedy Central program The Colbert Report from 2005 to 2014 and the CBS talk program The Late Show with Stephen Colbert beginning in September 2015.Colbert originally studied to be a dramatic actor, but became interested in improvisational theater while attending Northwestern University, where he met Second City director Del Close. Colbert first performed professionally as an understudy for Steve Carell at Second City Chicago, where his troupe mates included Paul Dinello and Amy Sedaris, comedians with whom he developed the sketch comedy series Exit 57. Read more on Wikipedia

Since 2007, the English Wikipedia page of Stephen Colbert has received more than 10,341,378 page views. His biography is available in 45 different languages on Wikipedia making him the 42nd most popular presenter.