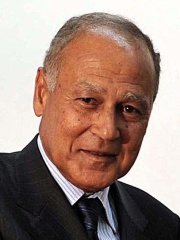 Ahmed Aboul Gheit (Arabic: أحمد أبو الغيط‎ [ˈæħmæd æbolˈɣeːtˤ], also: Abu al-Ghayt, Abu El Gheyt, etc.) (born 12 June 1942) is an Egyptian politician and diplomat who has been Secretary-General of the Arab League since July 2016. Aboul-Gheit served as the Minister of Foreign Affairs of Egypt from 11 July 2004 to 6 March 2011. Previously he was Egypt's Permanent Representative to the United Nations. Read more on Wikipedia

Since 2007, the English Wikipedia page of Ahmed Aboul Gheit has received more than 98,085 page views. His biography is available in 17 different languages on Wikipedia making him the 9,917th most popular politician.