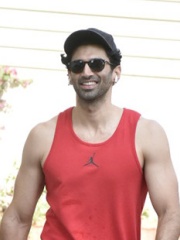 Aditya Roy Kapur (born 16 November 1985) is an Indian film actor who works in Hindi-language films. He made his Bollywood debut with 2009 film London Dreams but rose to fame with 2013 film Aashiqui 2. Read more on Wikipedia

Since 2007, the English Wikipedia page of Aditya Roy Kapur has received more than 4,763,904 page views. His biography is available in 17 different languages on Wikipedia making him the 8,612th most popular actor.