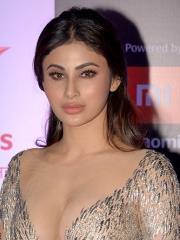 Mouni Roy (born 28 September 1985) is an Indian actress, singer, Kathak dancer, and model who primarily works in Hindi films and television. She debuted into television in 2007 with the role of Krishna Tulsi in the soap opera Kyunki Saas Bhi Kabhi Bahu Thi on Star Plus. After featuring in several other shows, she got her breakthrough with the show Devon Ke Dev...Mahadev on Life OK in 2011 in which she played Sati. She also essayed Meera in Life OK's Junoon – Aisi Nafrat Toh Kaisa Ishq and contested in Zara Nachke Dikha (2008), Pati Patni Aur Woh (2009), Jhalak Dikhhla Jaa 7 (2014), Box Cricket League 2 (2016) and Lip Sing Battle (2017).Roy went on to establish herself as one of the highest-paid Hindi television actresses with her portrayal of Shivanya, a shape shifting serpent in the supernatural thriller Naagin 1 (2015–16) on Colors TV. Read more on Wikipedia