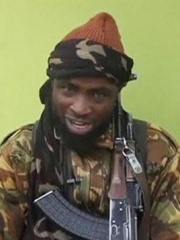 Abu Mohammed Abubakar bin Mohammad al-Sheikawi (also known by the alias Darul Akeem wa Zamunda Tawheed, or Darul Tawheed; "the abode of monotheism"; born 1965, 1969 or 1975) is a Kanuri man known as the current leader of Boko Haram, a Nigerian militant group that has declared loyalty to the Islamist militant group, Islamic State of Iraq and the Levant (ISIS). He served as deputy leader to the group's founder, Mohammed Yusuf, until Yusuf was executed in 2009. Nigerian authorities believed that Shekau was killed in 2009 during clashes between security forces and Boko Haram until July 2010, when Shekau appeared in a video claiming leadership of the group. Read more on Wikipedia

Among EXTREMISTS In Nigeria