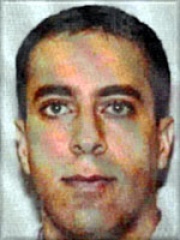 Ziad Samir Jarrah (Arabic: زياد سمير جراح‎, Ziyād Samīr Jarrāḥ; May 11, 1975 – September 11, 2001) was a member of al-Qaeda and one of the perpetrators of the September 11 attacks. Jarrah was the hijacker-pilot of United Airlines Flight 93, crashing the plane into a field in a rural area near Shanksville, Pennsylvania—after a passenger uprising—as part of the coordinated attacks.After a wealthy and secularist upbringing, Jarrah moved to Germany in 1996. He became involved in the planning of the September 11 attacks while attending Hamburg University of Applied Sciences (HAW) in the late 1990s, meeting Mohamed Atta, Marwan al-Shehhi and Ramzi bin al-Shibh, forming in 1998 what is now known as the Hamburg cell. Read more on Wikipedia

Since 2007, the English Wikipedia page of Ziad Jarrah has received more than 1,288,044 page views. His biography is available in 18 different languages on Wikipedia making him the 172nd most popular extremist.

Among EXTREMISTS In Lebanon