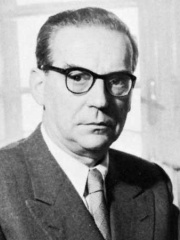 With an HPI of 74.03, Ivo Andrić is the most famous Bosnian, Herzegovinian Writer.  His biography has been translated into 86 different languages on wikipedia.

Ivo Andrić (Serbian Cyrillic: Иво Андрић, pronounced [ǐːʋo ǎːndritɕ]; born Ivan Andrić; 9 October 1892 – 13 March 1975) was a Yugoslav novelist, poet and short story writer who won the Nobel Prize in Literature in 1961. His writings dealt mainly with life in his native Bosnia under Ottoman rule. Born in Travnik in Austria-Hungary, modern-day Bosnia and Herzegovina, Andrić attended high school in Sarajevo, where he became an active member of several South Slav national youth organizations. Following the assassination of Archduke Franz Ferdinand in June 1914, Andrić was arrested and imprisoned by the Austro-Hungarian police, who suspected his involvement in the plot. As the authorities were unable to build a strong case against him, he spent much of the war under house arrest, only being released following a general amnesty for such cases in July 1917. After the war, he studied South Slavic history and literature at universities in Zagreb and Graz, eventually attaining his PhD. in Graz in 1924. He worked in the diplomatic service of the Kingdom of Yugoslavia from 1920 to 1923 and again from 1924 to 1941. In 1939, he became Yugoslavia's ambassador to Germany, but his tenure ended in April 1941 with the German-led invasion of his country. Shortly after the invasion, Andrić returned to German-occupied Belgrade. He lived quietly in a friend's apartment for the duration of World War II, in conditions likened by some biographers to house arrest, and wrote some of his most important works, including Na Drini ćuprija (The Bridge on the Drina). Following the war, Andrić was named to a number of ceremonial posts in Yugoslavia, which had since come under communist rule. In 1961, the Nobel Committee awarded him the Nobel Prize in Literature, selecting him over writers such as J. R. R. Tolkien, Robert Frost, John Steinbeck and E. M. Forster. The Committee cited "the epic force with which he ... traced themes and depicted human destinies drawn from his country's history". Afterwards, Andrić's works found an international audience and were translated into a number of languages. In subsequent years, he received a number of awards in his native country. Andrić's health declined substantially in late 1974 and he died in Belgrade the following March. In the years following Andrić's death, the Belgrade apartment where he spent much of World War II was converted into a museum and a nearby street corner was named in his honour. A number of other cities in the former Yugoslavia also have streets bearing his name. In 2012, filmmaker Emir Kusturica began construction of an ethno-town in eastern Bosnia that is named after Andrić. As Yugoslavia's only Nobel Prize-winning writer, Andrić was well known and respected in his native country during his lifetime. In Bosnia and Herzegovina, beginning in the 1950s and continuing past the breakup of Yugoslavia, his works have been disparaged by Bosniak literary critics for their supposed anti-Muslim bias. In Croatia, his works were blacklisted following Yugoslavia's dissolution, but were rehabilitated by the literary community at the start of the 21st century. He is highly regarded in Serbia for his contributions to Serbian literature. 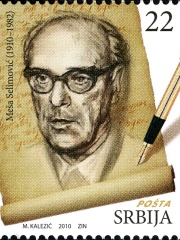 With an HPI of 60.67, Meša Selimović is the 2nd most famous Bosnian, Herzegovinian Writer.  His biography has been translated into 29 different languages.

Mehmed "Meša" Selimović (Serbian Cyrillic: Мехмед „Меша” Селимовић; pronounced [mɛ̌xmɛd mɛ̌ːʃa sɛlǐːmɔʋitɕ]; 26 April 1910 – 11 July 1982) was a Yugoslav writer, whose novel Death and the Dervish is one of the most important literary works in post-World War II Yugoslavia. Some of the main themes in his works are the relations between individuality and authority, life and death, and other existential problems. 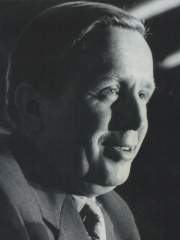 With an HPI of 56.51, Branko Ćopić is the 3rd most famous Bosnian, Herzegovinian Writer.  His biography has been translated into 23 different languages.

Branko Ćopić (Serbian Cyrillic: Бранко Ћопић, pronounced [brǎːnkɔ t͡ɕɔ̂pit͡ɕ]; 1 January 1915 – 26 March 1984) was a Serbian, Bosnian and Yugoslavian writer. He wrote poetry, short stories and novels, and became famous for his stories for children and young adults, often set during World War II in revolutionary Yugoslavia, written with characteristic Ćopić's humor in the form of ridicule, satire and irony. As a professional writer, Ćopić was very popular and was able to sell large number of copies. This allowed him to live solely from his writings, which was rare for the novelists in Yugoslavia at the time. However, quality of his writings brought him inclusion into primary school curriculum, which meant that some of his stories found its way in to the text-books and some novels became compulsory reading. In the early 1950s, he also wrote satirical stories, criticizing social and political anomalies and personalities from the country's political life of the time, for which he was considered a dissident and "heretic", and had to explain himself to the party hierarchy. 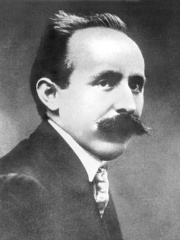 With an HPI of 56.22, Petar Kočić is the 4th most famous Bosnian, Herzegovinian Writer.  His biography has been translated into 28 different languages.

Petar Kočić (Serbian Cyrillic: Петар Кочић; 29 June 1877 – 27 August 1916) was a Bosnian Serb writer, activist and politician. Born in rural northwestern Bosnia in the final days of Ottoman rule, Kočić began writing around the turn of the twentieth century, first poetry and then prose. While a university student, he became politically active and began agitating for agrarian reforms within Bosnia and Herzegovina, which had been occupied by Austria-Hungary following the Ottomans' withdrawal in 1878. Other reforms that Kočić demanded were freedom of the press and freedom of assembly, which were denied under Austria-Hungary. In 1902, Kočić published his first short story collection. He published two more short story collections in 1904 and 1905, and subsequently adapted one of his most successful short stories, The Badger on Trial, for the stage. Kočić subsequently led several demonstrations in Sarajevo and was imprisoned on three occasions for publishing newspaper tracts critical of Habsburg rule. He spent the majority of his imprisonment in solitary confinement, which contributed to his development of depression. In 1909, Kočić was released as part of a general amnesty. The following year, he published his third and final short story collection, and won a seat in the newly created Bosnian Parliament (Sabor), where he became the leader of a faction of anti-Austrian Serb nationalists. He lobbied for increased concessions to Bosnian Serb peasants and farmers, agitating against the Austro-Hungarians as well as the Bosnian Muslim landowning class. He left the Sabor in 1913, citing mental exhaustion. In January 1914, Kočić was admitted into a Belgrade mental hospital, where he died two years later. Kočić was one of the most important Bosnian Serb politicians of the Austro-Hungarian era, as well as one of Bosnia and Herzegovina's most important twentieth-century playwrights. He was noted for his fiery temperament and sharp wit, which he frequently deployed against the Austro-Hungarian authorities. Kočić's works not only influenced an entire generation of Bosnian intellectuals, such as the future Nobel laureate Ivo Andrić, but also the Serbian and Yugoslav nationalist movements, as well as the Bosnian autonomist and Yugoslav communist movements. Numerous streets in Bosnia-Herzegovina and Serbia carry his name and his likeness has appeared on Bosnian 100 KM banknotes since 1998. 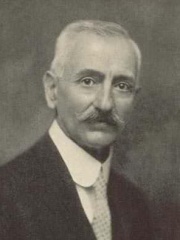 With an HPI of 54.64, Aleksa Šantić is the 5th most famous Bosnian, Herzegovinian Writer.  His biography has been translated into 17 different languages.

Aleksa Šantić (Serbian Cyrillic: Алекса Шантић, pronounced [ǎleksa ʃǎ:ntitɕ] (listen); 27 May 1868 – 2 February 1924) was a poet from Bosnia and Herzegovina. His poetry reflecting both the urban culture of the region. The most common themes of his poems are social injustice, nostalgic love, and the unity of the South Slavs. He was the editor-in-chief of the magazine Zora (1896–1901). Šantić was one of the leading persons of Serbian literary and national movement in Mostar. In 1914 Šantić became a member of the Serbian Royal Academy. 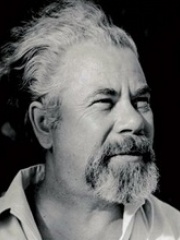 With an HPI of 54.47, Mak Dizdar is the 6th most famous Bosnian, Herzegovinian Writer.  His biography has been translated into 22 different languages.

Mehmedalija "Mak" Dizdar (17 October 1917 – 14 July 1971) was a Bosnian poet. His poetry combined influences from the Bosnian Christian culture, Islamic mysticism and cultural remains of medieval Bosnia, and especially the stećci. His works Kameni spavač (Stone Sleeper) and Modra rijeka (Blue River) are probably the most important Bosnian poetic achievements of the 20th century. 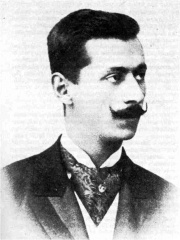 With an HPI of 53.52, Jovan Dučić is the 7th most famous Bosnian, Herzegovinian Writer.  His biography has been translated into 23 different languages.

Jovan Dučić (Serbian Cyrillic: Јован Дучић, pronounced [jǒʋan dûtʃitɕ]; 17 February 1871 – 7 April 1943) was a Herzegovinian Serb poet-diplomat and academic. He is one of the most influential Serbian lyricists and modernist poets. Dučić published his first collection of poetry in Mostar in 1901 and his second in Belgrade in 1908. He also wrote often in prose, writing a number of literary essays, studies on writers, letters by poets from Switzerland, Greece and Spain and the book Blago cara Radovana for which he is most remembered when it comes to his writing. Dučić was also one of the founders of the Narodna Odbrana, a nationalist non-governmental organization in the Kingdom of Serbia and he was a member of the Serbian Royal Academy. 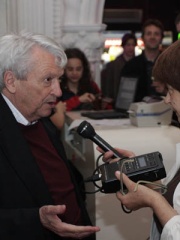 With an HPI of 53.31, Predrag Matvejević is the 8th most famous Bosnian, Herzegovinian Writer.  His biography has been translated into 17 different languages.

Predrag Matvejević (7 October 1932 – 2 February 2017) was a Bosnian and Croatian writer and scholar. A literature scholar who taught at universities in Zagreb, Paris and Rome, he is best known for his 1987 non-fiction book Mediterranean: A Cultural Landscape, a seminal work of cultural history of the Mediterranean region which has been translated into more than 20 languages. 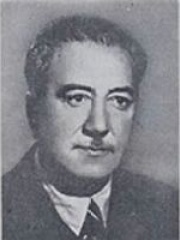 With an HPI of 53.27, Isak Samokovlija is the 9th most famous Bosnian, Herzegovinian Writer.  His biography has been translated into 17 different languages.

Isak Samokovlija (3 September 1889 – 15 January 1955) was a prominent Bosnian Jewish writer. By profession he was a physician. His stories describe the life of the Bosnian Sephardic Jews. 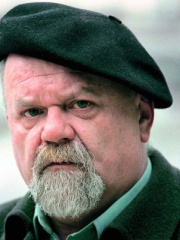 With an HPI of 51.45, Abdulah Sidran is the 10th most famous Bosnian, Herzegovinian Writer.  His biography has been translated into 15 different languages.

Abdulah Sidran (born 2 October 1944), often referred to by his hypocoristic nickname Avdo, is a Bosnian poet and screenwriter. He is best known for writing the poetry book Sarajevski Tabut and the scripts for When Father Was Away on Business and Do You Remember Dolly Bell?.

Pantheon has 18 people classified as writers born between 1794 and 1980. Of these 18, 8 (44.44%) of them are still alive today. The most famous living writers include Abdulah Sidran, Abaz Arslanagić, and Semir Osmanagić. The most famous deceased writers include Ivo Andrić, Meša Selimović, and Branko Ćopić. As of April 2022, 4 new writers have been added to Pantheon including Aleksa Šantić, Isak Samokovlija, and Abdulah Sidran.