This page contains a list of the greatest Czech Tennis Players. The pantheon dataset contains 1,148 Tennis Players, 56 of which were born in Czechia. This makes Czechia the birth place of the 7th most number of Tennis Players behind Spain and Germany. 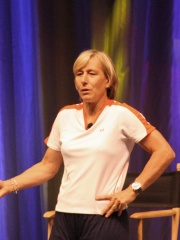 With an HPI of 62.04, Martina Navratilova is the most famous Czech Tennis Player.  Her biography has been translated into 78 different languages on wikipedia.

Martina Navratilova (Czech: Martina Navrátilová [ˈmarcɪna ˈnavraːcɪlovaː] (listen); née Šubertová [ˈʃubɛrtovaː]; born October 18, 1956) is a Czech–American former professional tennis player. Widely considered among the greatest tennis players of all time, Navratilova won 18 major singles titles, 31 major women's doubles titles, and 10 major mixed doubles titles, for a combined total of 59 major titles, the most in the Open Era. Alongside Chris Evert, her greatest rival, Navratilova dominated women's tennis in the 1970s and 1980s. Navratilova was ranked as the world No. 1 in singles for a total of 332 weeks (second only to Steffi Graf), and for a record 237 weeks in doubles, making her the only player in history to have held the top spot in both disciplines for over 200 weeks. She won 167 top-level singles titles and 177 doubles titles, both the Open Era records. She won a record six consecutive singles majors across 1983 and 1984 while simultaneously winning the Grand Slam in doubles. Navratilova claims the best professional season winning percentage, 98.8% in 1983 (going 98–1 for the season), and the longest all-surface winning streak of 74 straight match wins. She reached the Wimbledon singles final 12 times, including for nine consecutive years from 1982 through 1990, and won the title a record nine times. Navratilova is one of the three tennis players, along with Margaret Court and Doris Hart, to have accomplished a career Grand Slam in singles, same-sex doubles, and mixed doubles, called the career "Boxed Set". She won her last major title, the mixed doubles crown at the 2006 US Open, shortly before her 50th birthday, and 32 years after her first major title in 1974. Originally from Czechoslovakia, Navratilova was stripped of her citizenship when, in 1975 at age 18, she asked the United States for political asylum and was granted temporary residence. She became a US citizen in 1981. On January 9, 2008, Navratilova acquired Czech citizenship, thus becoming a dual citizen. She stated she has not renounced her U.S. citizenship nor does she plan to do so, and that reclaiming Czech nationality was not politically motivated. Navratilova has been openly lesbian since 1981, and has been an activist for LGBT issues. 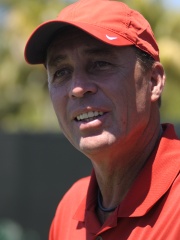 With an HPI of 60.83, Ivan Lendl is the 2nd most famous Czech Tennis Player.  His biography has been translated into 52 different languages.

Ivan Lendl (Czech pronunciation: [ˈɪvan ˈlɛndl̩]; born March 7, 1960) is a Czech–American former professional tennis player. He is widely regarded as one of the greatest tennis players of all time. Lendl was ranked world No. 1 in singles for 270 weeks and won 94 singles titles. He won eight major singles titles and was runner-up a joint record 11 times (tied with Roger Federer and Novak Djokovic), making him the first man to contest 19 major finals. Lendl also contested a record eight consecutive US Open finals, and won seven year-end championships. Lendl is the only man in professional tennis history to have a match winning percentage of over 90% in five different years (1982, 1985, 1986, 1987, and 1989). He also had a comfortable head-to-head winning record against his biggest rivals, which translates to a 22–13 record (4–3 in major matches) against Jimmy Connors and a 21–15 record (7–3 in major matches) against John McEnroe.Lendl's dominance of his era was the most evident at the year-end championships, which feature the eight best-ranked singles players. He holds a win–loss record at the event of 39–10, having contested the final nine consecutive times, a record.Commonly referred to as the 'Father Of Modern Tennis' and 'The Father Of The Inside-Out Forehand', Lendl pioneered a new style of tennis; his game was built around his forehand, hit hard and with a heavy topspin, and his success is cited as a primary influence in popularizing the now-common playing style of aggressive baseline power tennis. After retirement, he became a tennis coach for several players; in particular, he helped Andy Murray win three major titles and reached the world No. 1 ranking. 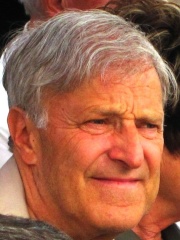 With an HPI of 55.45, Jan Kodeš is the 3rd most famous Czech Tennis Player.  His biography has been translated into 34 different languages.

Jan Kodeš (born 1 March 1946) is a Czech former professional tennis player. A three-time major singles champion, Kodeš was one of the premier players in the early 1970s. Kodeš's greatest success was achieved on the clay courts of the French Open, where he won the singles title in 1970 and 1971. However, he also won Wimbledon on grass courts in 1973, although the tournament was largely boycotted by top players that year over the ban of Nikola Pilić by the International Lawn Tennis Federation (ILTF).Kodeš never played at the Australian Open, but was twice the runner-up at the US Open, in 1971 and 1973. Kodeš reached his highest ATP ranking of world No. 5 in September 1973. During the Open Era, he won nine top-level singles titles and 17 doubles titles. Kodeš was inducted into the International Tennis Hall of Fame in 1990. In 2013, he received the Czech Fair Play Award from the Czech Olympic Committee. He is an economics graduate of the Prague University. 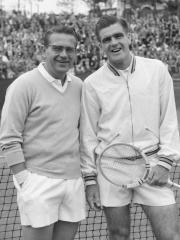 With an HPI of 54.62, Jaroslav Drobný is the 4th most famous Czech Tennis Player.  His biography has been translated into 25 different languages.

Jaroslav Drobný (Czech pronunciation: [ˈjaroslav ˈdrobniː]; 12 October 1921 – 13 September 2001) was a World No. 1 amateur tennis and ice hockey champion. He left Czechoslovakia in 1949 and travelled as an Egyptian citizen before becoming a citizen of the United Kingdom in 1959, where he died in 2001. In 1954, he became the first and, to date, only player with African citizenship to win the Wimbledon Championships (aside from dual citizen Roger Federer, who holds South African citizenship but officially represents only Switzerland in sports).

With an HPI of 51.16, Petr Korda is the 5th most famous Czech Tennis Player.  His biography has been translated into 34 different languages.

Petr Korda (born 23 January 1968) is a Czech former professional tennis player. He won the 1998 Australian Open and was runner-up at the 1992 French Open, reaching a career-high ranking of No. 2 in February 1998. Korda tested positive for doping in July 1998 at Wimbledon, and was banned from September 1999 for 12 months, but he retired shortly before the ban. 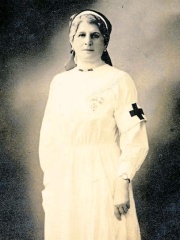 With an HPI of 48.81, Hedwiga Rosenbaumová is the 6th most famous Czech Tennis Player.  Her biography has been translated into 20 different languages.

Hedwig Rosenbaum (3 July 1864 – 31 July 1939), née Hedwig Austerlitz, from 1909 on Hedwig Raabe, in Czech from 1945 (sic!) on referred as Hedwiga Rosenbaumová, was a tennis player who was attributed to represent Bohemia. She won two bronze medals in tennis at the 1900 Summer Olympics in Paris, in the women's singles and the mixed doubles with Great Britain's Archibald Warden. She was the first woman to represent Bohemia at the Olympics.Hedwig Rosenbaum was of German-Jewish origin and lived in Prague all her life. She belonged to the first generation in Prague to play tennis. At least since 1894 she played in singles, doubles and mixed tournaments in Cisleithania and Germany for the Prague Lawn Tennis Club. In 1899 Rosenbaum was number 5 on the Austrian national list. In the same year she won a tournament in Berlin. In 1900, Rosenbaum took part in the second Summer Olympics in Paris as a private individual from Prague at her own expense for travel, accommodation and entry fees. She belonged neither to the Bohemian nor the Czech nor to the Austrian delegation. Rosenbaum was the first woman ever to represent Bohemia and Austria-Hungary at the Olympics, winning two bronze medals. In the individual tennis competition, she lost in the semifinals to eventual silver medalist Yvonne Prévost in straight sets 6–1, 6–1. In the mixed competition she played together with Briton Archibald Warden. The two were beaten in the semifinals, their second game. They lost to Prévost from France and Harold Mahony from Britain in straight sets 6–3, 6–0. The qualification of both pairs is attributed to mixed teams in Olympic history. In 1904 she won the title at the Bohemian championships and finished second at the Austrian championships. After that she withdrew from tournament sports due to age. Hedwig Rosenbaum had been managing director and board member of the Club of German Female Artists in Prague (Klub deutscher Künstlerinnen in Prag) since it was founded in 1905. During World War I, Hedwig Raabe worked as a nurse. She was temporarily employed in the publishing house of her nephew Heinrich Mercy Jr. and ran a handicraft shop from 1921. She translated sports books, plays and fiction from English into German for Prague newspapers and German publishers. 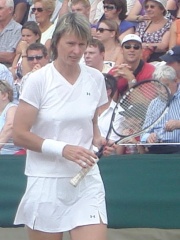 With an HPI of 48.52, Helena Suková is the 7th most famous Czech Tennis Player.  Her biography has been translated into 33 different languages. 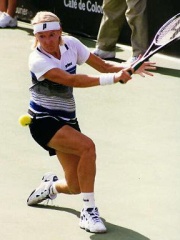 With an HPI of 47.76, Jana Novotná is the 8th most famous Czech Tennis Player.  Her biography has been translated into 50 different languages.

Jana Novotná (Czech pronunciation: [ˈjana ˈnovotnaː]; 2 October 1968 – 19 November 2017) was a Czech professional tennis player. She played a serve and volley game, an increasingly rare style of play among women during her career. Novotná won the women's singles title at Wimbledon in 1998, and was runner-up in three other majors. Novotná also won 12 major women's doubles titles (completing a double career Grand Slam), four major mixed doubles titles, and three Olympic medals. She reached a career-high singles ranking of world No. 2 in 1997, and held the No. 1 ranking in doubles for 67 weeks. 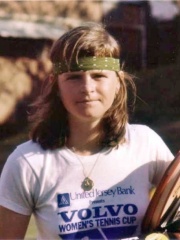 With an HPI of 46.60, Hana Mandlíková is the 9th most famous Czech Tennis Player.  Her biography has been translated into 37 different languages.

Hana Mandlíková (born 19 February 1962) is a former professional tennis player from Czechoslovakia who later obtained Australian citizenship. During her career she won four Grand Slam singles titles - the 1980 Australian Open, 1981 French Open, 1985 US Open and 1987 Australian Open. She was also runner-up in four Grand Slam singles events - twice at Wimbledon and twice at the US Open. The graceful right-hander secured one Grand Slam women's doubles title, at the 1989 US Open with Martina Navratilova. Inducted into the International Tennis Hall of Fame in 1994, Mandlíková was one of the brightest stars of her generation and is considered one of the greatest female players of the Open Era.Mandlíková had a career-high singles ranking of No. 3, and was ranked in the top 50 for 12 consecutive seasons (1978–89), including seven in the top 10. She led Czechoslovakia to three consecutive Federation Cup victories from 1983–1985, and was only the third woman to win Grand Slam titles on grass, clay and hard court, joining Chris Evert and Martina Navratilova. She defeated both Evert and Navratilova on consecutive days to accomplish this feat at the 1985 US Open. She retired in 1990, and went on to coach Jana Novotná to the Wimbledon singles title and a career-high ranking of world No. 2. She also served as the Czech Republic's Olympic and Fed Cup coach. 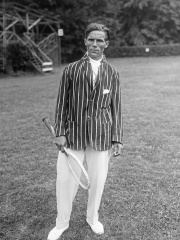 With an HPI of 45.67, Karel Koželuh is the 10th most famous Czech Tennis Player.  His biography has been translated into 15 different languages.

Karel Koželuh (Czech: [ˈkarɛl ˈkoʒɛlux]; Hungarian: Kozeluh Károly [ˈkozɛluh ˈkaːroj]; 7 March 1895 – 27 April 1950) was a Czech tennis, association football, and ice hockey player of the 1920s and 1930s. Koželuh became a European ice hockey champion in 1925 and was one of the top-ranked players on the professional tennis circuit in the 1930s.