This page contains a list of the greatest Czech Athletes. The pantheon dataset contains 3,055 Athletes, 45 of which were born in Czechia. This makes Czechia the birth place of the 18th most number of Athletes behind Australia and Hungary.

The following people are considered by Pantheon to be the top 10 most legendary Czech Athletes of all time. This list of famous Czech Athletes is sorted by HPI (Historical Popularity Index), a metric that aggregates information on a biography’s online popularity. Visit the rankings page to view the entire list of Czech Athletes. 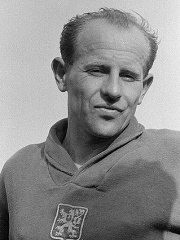 With an HPI of 76.81, Emil Zátopek is the most famous Czech Athlete.  His biography has been translated into 53 different languages on wikipedia.

Emil Zátopek (Czech pronunciation: [ˈɛmɪl ˈzaːtopɛk] (listen); 19 September 1922 – 21 November 2000) was a Czech long-distance runner best known for winning three gold medals at the 1952 Summer Olympics in Helsinki. He won gold in the 5,000 metres and 10,000 metres runs, but his final medal came when he decided at the last minute to compete in the first marathon of his life. He was nicknamed the "Czech Locomotive". In 1954, Zátopek was the first runner to break the 29-minute barrier in the 10,000 metres. Three years earlier in 1951, he had broken the hour for running 20 km. He was considered one of the greatest runners of the 20th century and was also known for his brutally tough training methods. He was the originator of interval training and hypoventilation training.In February 2013, the editors at Runner's World Magazine selected him as the Greatest Runner of All Time. He is the only person to win the 5,000 metres (24 July 1952), 10,000 metres (20 July 1952) and Marathon (27 July 1952), in the same Olympic Games. 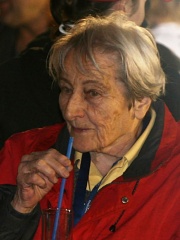 With an HPI of 71.24, Dana Zátopková is the 2nd most famous Czech Athlete.  Her biography has been translated into 30 different languages.

Dana Zátopková (Czech pronunciation: [ˈdana ˈzaːtopkovaː]; née Ingrová [ˈɪŋɡrovaː], 19 September 1922 – 13 March 2020) was a Czech javelin thrower. She won the gold medal for javelin at the 1952 Summer Olympics (only an hour after her husband, Emil Zátopek, won the 5,000 m), and the silver medal in the 1960 Summer Olympics. She was the European champion in 1954 and 1958. She also set a world record in 1958 (55.73 m) when she was 35, making her the oldest woman to break one in an outdoor athletics event. Zátopková and her husband were the witnesses at the wedding ceremony of Olympic gold medalists Olga Fikotová and Harold Connolly in Prague in 1957. Emil spoke to the Czechoslovak president Antonín Zápotocký to request help in Olga getting a permit to marry Connolly. While it is not clear how much this helped, they did receive a permit a few days later. 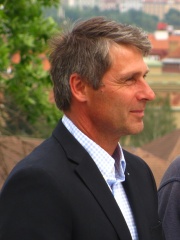 With an HPI of 66.85, Jan Železný is the 3rd most famous Czech Athlete.  His biography has been translated into 44 different languages.

Jan Železný (Czech pronunciation: [jan ˈʒɛlɛzniː] (listen); born 16 June 1966) is a Czech former track and field athlete who competed in the javelin throw. He is a World and Olympic champion and holds the world record with a throw of 98.48 metres (323 ft 1 in). Widely considered to be the greatest javelin thrower of the modern era, he also has the fourth, fifth and sixth best performances of all time. He broke the world record a total of four times. 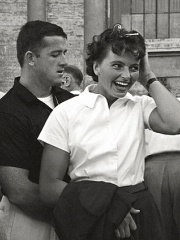 With an HPI of 62.59, Olga Fikotová is the 4th most famous Czech Athlete.  Her biography has been translated into 20 different languages.

Olga Fikotová (Czech pronunciation: [ˈolɡa ˈfɪkotovaː], born 13 November 1932) is a Czechoslovak and later American discus thrower. She is best known for winning gold at the 1956 Melbourne Olympics and for her romance across Cold War barriers with American hammer gold medalist Hal Connolly. 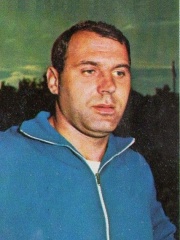 With an HPI of 60.59, Ludvík Daněk is the 5th most famous Czech Athlete.  His biography has been translated into 23 different languages.

Ludvík Daněk (Czech pronunciation: [ˈludviːk ˈdaɲɛk]) (6 January 1937 – 15 November 1998) was a Czechoslovak discus thrower, who won the gold medal at the 1972 Olympic Games with a throw of 64.40 m (211'3"). Daněk was born in Blansko, and competed in four Summer Olympics for Czechoslovakia, winning silver in 1964 Olympics, bronze in 1968 Olympics and gold in 1972 Olympics. He set three world records in discus throw, of 64.55 m in 1964, 65.22 m in 1965 and of 66.07 m in 1966. He also won several medals at the European Athletics Championships. He was the gold medallist at the 1971 European Athletics Championships and was the silver medallist three years later at the 1974 European Athletics Championships.After retiring from competitions Daněk became a sports administrator, and served as vice-president of the Czech athletics federation. The location where he set his first world record in 1964 is now celebrated with a memorial circle, and the venue in Turnov is now called the Ludvík Daněk Stadium. He died in Hutisko-Solanec near Vsetín, aged 61. Since 1999, the year following his death, the stadium has hosted an annual track and field meeting in his honour – the Ludvík Daněk Memorial. 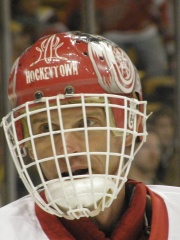 With an HPI of 59.33, Dominik Hašek is the 6th most famous Czech Athlete.  His biography has been translated into 32 different languages.

Dominik Hašek (Czech pronunciation: [ˈdomɪnɪk ˈɦaʃɛk], audio ; born January 29, 1965) is a Czech former ice hockey goaltender who mostly played for the Buffalo Sabres of the National Hockey League (NHL). Widely regarded as one of the best goaltenders of all time, Hašek also played for the Chicago Blackhawks, Detroit Red Wings and the Ottawa Senators in his 16-season National Hockey League (NHL) career, before finishing his career in Europe. During his years in Buffalo, he became one of the league's finest goaltenders, earning him the nickname "The Dominator". His strong play has been credited with establishing European goaltenders in a league previously dominated by North Americans. He is a two-time Stanley Cup champion, both with the Red Wings. Hašek was one of the league's most successful goaltenders of the 1990s and early 2000s. From 1993 to 2001, he won six Vezina Trophies, the most under the award's current system of voting for the best individual goalie. In 1998 he won his second consecutive Hart Memorial Trophy, becoming the first goaltender to win the award multiple times. During the 1998 Winter Olympics in Nagano, Japan, he led the Czech national ice hockey team to its first and only Olympic gold medal. The feat made him a popular figure in his home country and prompted hockey legend Wayne Gretzky to call him "the best player in the game". While with the Red Wings in 2002, Hašek became the first European-trained starting goaltender to win the Stanley Cup. In the process, he set a record for shutouts in a postseason year. Hašek was considered an unorthodox goaltender, with a distinct style that labeled him a "flopper". He was best known for his concentration, foot speed, flexibility, and unconventional saves, such as covering the puck with his blocker rather than his trapper. Hašek holds the highest career save percentage of all time (0.9223) and is seventh in goals against average (first in the modern era) (2.202), and the third-highest single-season save percentage (0.9366 in 1998–99). The record was broken by Tim Thomas in the 2010–11 season and again in the 2011–12 season by Brian Elliott, who now holds the record at .940. Hašek is the only goalie to face the most shots per 60 minutes and have the highest save percentage in one season. He did it twice while with the Sabres (1996 and 1998). At the time of his retirement, he was the oldest active goalie in the NHL at 43, and the second-oldest active player in the league after Red Wings teammate Chris Chelios, who was 46. Hašek announced his retirement on June 9, 2008, but on April 21, 2009, he announced a comeback to professional hockey and signed a contract with HC Pardubice of the Czech Extraliga. On June 7, 2010, he signed with Spartak Moscow of the KHL and played the last season of his career with this team. Hašek announced his retirement on October 9, 2012. Hašek was inducted into the Hockey Hall of Fame on November 17, 2014. He is also a member of the Czech Ice Hockey Hall of Fame and the IIHF Hall of Fame. His number was retired by the Sabres and HC Pardubice. In 2017, he was named one of the '100 Greatest NHL Players' in history. 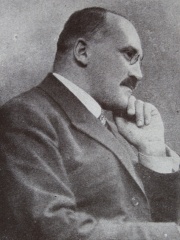 With an HPI of 58.23, František Janda-Suk is the 7th most famous Czech Athlete.  His biography has been translated into 17 different languages.

František Janda-Suk (Czech pronunciation: [ˈfrancɪʃɛk ˈjanda ˈsuk], March 25, 1878 – June 23, 1955) was a Czech athlete who competed for Bohemia in the 1900 Summer Olympics and in the 1912 Summer Olympics and Czechoslovakia at the 1924 Summer Olympics.He was born in Postřižín near Roudnice nad Labem and died in Prague. In the 1900 Summer Olympics held in Paris, France, where he won the silver medal in the discus throw. He was the first modern athlete to throw the discus while rotating the whole body. He invented this technique when studying the position of the famous statue of Discobolus. After only one year of developing the technique he gained the olympic silver. At the 1912 Summer Olympics in Stockholm, Sweden he was 15th in shot put and 17th in discus throw . 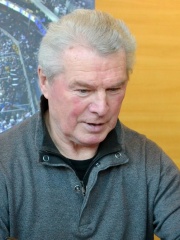 With an HPI of 58.11, František Pospíšil is the 8th most famous Czech Athlete.  His biography has been translated into 15 different languages.

With an HPI of 57.65, Jaroslav Holík is the 9th most famous Czech Athlete.  His biography has been translated into 16 different languages. 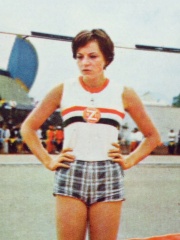 With an HPI of 57.51, Miloslava Rezková is the 10th most famous Czech Athlete.  Her biography has been translated into 20 different languages.

Miloslava Rezková (Czech pronunciation: [ˈmɪloslava ˈrɛskovaː]; 22 July 1950 – 19 October 2014), also known as Miloslava Hübnerová, was a Czech high jumper who won gold medals at the 1968 Olympics and 1969 European Championships.Rezková was born and raised in Prague, where she married Rudolf Hübner, a fellow Olympic high jumper. She first trained in ballet and rhythmic gymnastics before changing to the high jump. In 1968 she improved her personal best from 1.66 to 1.87 m, and became national and Olympic champion. In the high jump world ranking she was first in 1968 and 1969, sixth in 1970–71, and ninth in 1972–73. She retired after 1977 and later became a goldsmith and athletics coach.

Pantheon has 45 people classified as athletes born between 1878 and 1997. Of these 45, 35 (77.78%) of them are still alive today. The most famous living athletes include Jan Železný, Olga Fikotová, and Dominik Hašek. The most famous deceased athletes include Emil Zátopek, Dana Zátopková, and Ludvík Daněk. As of October 2020, 13 new athletes have been added to Pantheon including František Pospíšil, Bohumil Němeček, and Karel Mejta Sr.