This page contains a list of the greatest Czech Soccer Players. The pantheon dataset contains 16,923 Soccer Players, 162 of which were born in Czechia. This makes Czechia the birth place of the 19th most number of Soccer Players behind Denmark and Portugal. 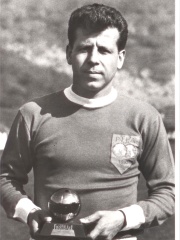 With an HPI of 74.70, Josef Masopust is the most famous Czech Soccer Player.  His biography has been translated into 45 different languages on wikipedia.

Josef Masopust (9 February 1931 – 29 June 2015) was a Czech football player and coach. He played as midfielder and was a key player for Czechoslovakia, helping them reach the 1962 FIFA World Cup Final. He was capped 63 times, scoring 10 goals for his country.He was named European Footballer of the Year in 1962. In November 2003, to celebrate UEFA's Jubilee, Masopust was selected as his country's Golden Player by the Football Association of the Czech Republic as their most outstanding player of the past 50 years. He was named by Pelé as one of the top 125 greatest living footballers in March 2004. He is regarded as one of the greatest midfielders of all time. 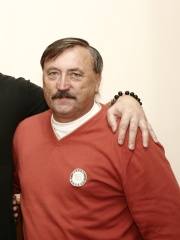 With an HPI of 73.94, Antonín Panenka is the 2nd most famous Czech Soccer Player.  His biography has been translated into 43 different languages.

Antonín Panenka (born 2 December 1948) is a Czech retired footballer who played as an attacking midfielder. He spent most of his career representing Czechoslovak club Bohemians Prague. Panenka won UEFA Euro 1976 with the national team of Czechoslovakia. In the final against West Germany, he notably scored the winning penalty in the shootout with a softly-chipped ball up the middle of the goal as the goalkeeper dived away; a style of penalty now known as a panenka. In 1980, he won Czechoslovak Footballer of the Year and his team finished third at Euro 1980. 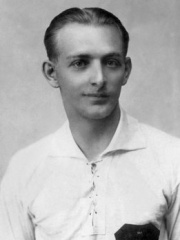 With an HPI of 72.03, Matthias Sindelar is the 3rd most famous Czech Soccer Player.  His biography has been translated into 32 different languages.

Matthias Sindelar (German: [maˈtiːas ˈʃɪndəlaːɐ̯]; 10 February 1903 – 23 January 1939) was an Austrian professional footballer. Regarded as one of the greatest players of all-time, Sindelar played for Austria Wien and the Austrian national team. He played as a centre-forward for the celebrated Austrian national side of the early 1930s that became known as the Wunderteam, which he captained at the 1934 World Cup. Known as "The Mozart of football" or Der Papierene ("The Paper Man") for his slight build, he was renowned as one of the finest pre-war footballers, known for his fantastic dribbling ability and creativity. He was voted the best Austrian footballer of the 20th Century in a 1999 poll by the International Federation of Football History and Statistics (IFFHS) and was named Austria's sportsman of the century a year before.Matthias Sindelar was a forward. With the Wunderteam, he showed himself as one of the key elements of this formation, evolving in 2-3-5 . It gave, according to specialists like Paul Dietschy, "such fluidity to the Austrian system" that it was nicknamed the "Viennese whirlpool" . Although the Wunderteam regularly lacks efficiency, this lack is compensated by Sindelar, his technical skill and his vision of the game. 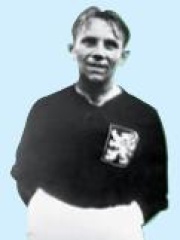 With an HPI of 70.02, Oldřich Nejedlý is the 4th most famous Czech Soccer Player.  His biography has been translated into 35 different languages.

Oldřich Nejedlý (26 December 1909 – 11 June 1990) was a Czech footballer, who spent his entire career at Sparta Prague as an inside-forward. He is considered to be one of Czechoslovakia's greatest players of all time. He was the top goalscorer of the 1934 World Cup. 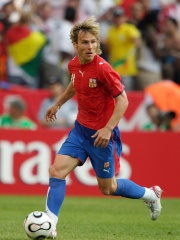 With an HPI of 69.16, Pavel Nedvěd is the 5th most famous Czech Soccer Player.  His biography has been translated into 56 different languages.

Pavel Nedvěd (Czech pronunciation: [ˈpavɛl ˈnɛdvjɛt] (listen); born 30 August 1972) is a Czech retired footballer who played as a midfielder. Described as one of the best footballers of his generation, he is also regarded as one of the most successful players to emerge from the Czech Republic, winning domestic and European accolades with Italian clubs Lazio, including the last Cup Winners' Cup, and Juventus, whom he led to the 2003 UEFA Champions League Final. Nedvěd was a key member of the Czech team which reached the final of Euro 1996, during which he attracted international attention. He also captained the national team at UEFA Euro 2004, where they were defeated in the semi-final by eventual champions Greece, and Nedvěd was named as part of the Team of the Tournament. Furthermore, Nedvěd helped his team qualify for the 2006 FIFA World Cup for the first time since the breakup of Czechoslovakia. Due to his performances, as well as his quick and energetic runs during matches, Nedvěd was nicknamed "Furia Ceca" ("Czech Fury") by Italian fans and "The Czech cannon" in English-language media. His nickname in Czech is Méďa ("Little Bear"), stemming from the similarity between his surname and the Czech word for bear, Medvěd. Winning the Ballon d'Or as European Footballer of the Year in 2003, Nedvěd was the second Czech player to receive the honour and the first since the breakup of Czechoslovakia. During his career Nedvěd received a number of other individual awards, including the second Golden Foot award in 2004, Czech Footballer of the Year (four times) and the Golden Ball (six times). He was also named by Pelé as one of the FIFA 100, and was placed in the UEFA Team of the Year in 2003, 2004, and 2005. He retired following the 2008–09 season, after a 19-year professional career. Nedvěd played 501 league matches at club level (scoring 110 goals), and was capped 91 times for the Czech Republic (scoring 18 times). 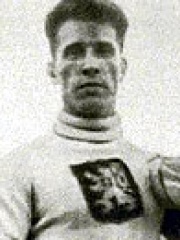 With an HPI of 68.89, František Plánička is the 6th most famous Czech Soccer Player.  His biography has been translated into 27 different languages.

František Plánička (Czech pronunciation: [ˈfraɲcɪʃɛk ˈplaːɲɪtʃka]; 2 June 1904 – 20 July 1996) was a Czech football goalkeeper and one of the most honoured players in the history of Czechoslovak football. He played all his career for Slavia Prague, during which time the club won the Czech league eight times and the Mitropa Cup once. He also became a member of the Czechoslovakia national team and later its captain during the World Cup finals of 1934 (where the Czech team finished second) and 1938. Plánička was a courageous player, to the extent that in Czechoslovakia's 1938 World Cup match against Brazil, he remained on the field despite having suffered a serious injury. He was a goalkeeper of outstanding reflexes and shot-stopping abilities and was also characterized by his sportsmanship, never once being cautioned or sent off in his career. He was awarded the UNESCO International Fair Play Award in 1985Regarded as one of the greatest goalkeepers of his generation, and of all time, in 1999, the IFFHS elected him the best Czech goalkeeper – as well as the sixth best in Europe and the ninth best overall – of the twentieth century. In 2003, he was catalogued as the greatest goalkeeper of an era that included other notable keepers such as Ricardo Zamora and Gianpiero Combi. 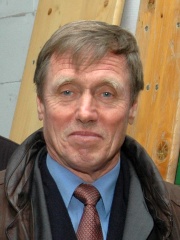 With an HPI of 67.61, Sigfried Held is the 7th most famous Czech Soccer Player.  His biography has been translated into 43 different languages.

Sigfried "Siggi" Held (born 7 August 1942) is a German former football player and current coach. He played as an attacking midfielder or forward. Born in Freudenthal, Sudetenland (now Czech Republic), Held's first football club was Kickers Offenbach. In 1965 he became a player in the Bundesliga with Borussia Dortmund. During his career he played 442 games (72 goals) in the Bundesliga, for Dortmund, Offenbach and Bayer 05 Uerdingen. He also made 41 appearances for the West German national team, including the final of the 1966 World Cup.After his retirement as a professional player in 1981 he became a football coach – 1982–83 for FC Schalke 04, 1986–89 for the Iceland National Football Team, 1989–90 for Galatasaray, 1991–93 for Admira Wacker Wien, 1993–95 for Dynamo Dresden, 1995 for Gamba Osaka and 1996–98 for VfB Leipzig. 2001–2003 he was coach for the national team of Malta. In 2004, he became coach for the Thailand national football team, but was suspended after only five months. As of February 2009, he works as fan relations supervisor with Borussia Dortmund. 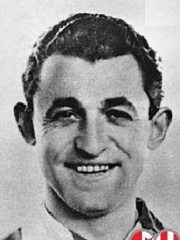 With an HPI of 67.40, Antonín Puč is the 8th most famous Czech Soccer Player.  His biography has been translated into 25 different languages.

Antonín Puč (16 May 1907 – 18 April 1988) was a Czech footballer who played as a forward; he is the all-time leading scorer for the Czechoslovak national team. Puč's international career lasted from 1926 to 1939; in that time, he played 61 matches for Czechoslovakia, scoring 35 goals. He played for Czechoslovakia in the 1934 FIFA World Cup scoring two goals, including one in the final, a 2–1 loss against Italy, and also played in the 1938 edition. Puč spent most of his club career with Slavia Prague.After the split of the country into the Czech Republic and Slovakia and the corresponding national teams, Jan Koller surpassed Puč's record in 2005. Puč died in 1988 aged 80. 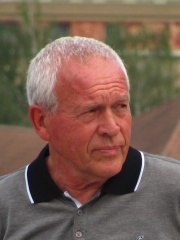 With an HPI of 67.30, Ivo Viktor is the 9th most famous Czech Soccer Player.  His biography has been translated into 30 different languages.

Ivo Viktor (born 21 May 1942 in Křelov) is a Czech former football goalkeeper. He played for Czechoslovakia, representing his country on 63 occasions between 1966 and 1977, taking part in the 1970 FIFA World Cup and winning the 1976 European Championship. Regarded as one of the best goalkeepers of his generation in Europe in his prime, he placed third in the 1976 Ballon d'Or, and was a five-time winner of the Czechoslovak Footballer of the Year award, and a two-time winner of the European Goalkeeper of the Year award. 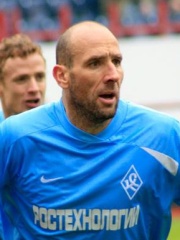 With an HPI of 67.21, Jan Koller is the 10th most famous Czech Soccer Player.  His biography has been translated into 47 different languages.

Jan Koller (Czech pronunciation: [ˈjan ˈkolɛr]; born 30 March 1973) is a Czech former professional footballer who played as a striker. He was noted for his height, strong physique, and heading ability. He began his career at Sparta Prague, then moved to Belgium, where he became the Belgian First Division top scorer with Lokeren. He won the league championship twice with Anderlecht and the Belgian Golden Shoe. In 2001, he joined Borussia Dortmund, where he won the Bundesliga title in his first season and scored 73 goals in 167 official games over five campaigns. He moved frequently in his later career, with stops in France, Germany and Russia. Koller is the all-time top scorer for the Czech Republic national team, with 55 goals in 91 appearances in a decade-long career starting in 1999. He represented the nation at three UEFA European Championships and the 2006 FIFA World Cup.