This page contains a list of the greatest Ukrainian Soccer Players. The pantheon dataset contains 16,923 Soccer Players, 106 of which were born in Ukraine. This makes Ukraine the birth place of the 32nd most number of Soccer Players behind Norway and Hungary. 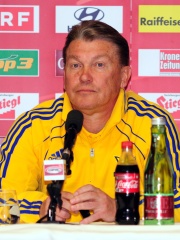 With an HPI of 72.15, Oleg Blokhin is the most famous Ukrainian Soccer Player.  His biography has been translated into 58 different languages on wikipedia.

Oleg Vladimirovich Blokhin, or Oleh Volodymyrovych Blokhin (Ukrainian: Оле́г Володи́мирович Блохі́н, Russian: Оле́г Влади́мирович Блохи́н; born 5 November 1952), is a former Ukrainian and Soviet football player and manager. Regarded as one of the greatest footballers of his generation, Blokhin was formerly a standout striker for Dynamo Kyiv and the Soviet Union.He holds the all-time top goalscorer record for both Dynamo Kyiv (266 goals) and the Soviet Union national team (42 goals), as well as being the overall top goalscorer in the history of the Soviet Top League (211 goals). He is also the only player to have been capped over 100 times for the Soviet Union and holds Dynamo's appearance record with 582 appearances during his 18-year spell at the club. With Dynamo, Blokhin won eight Soviet league titles, five national cups and two European Cup Winners' Cups. He also competed for the Soviet Union at the 1972 and 1976 Olympic Games and 1982 and 1986 FIFA World Cups. During his playing career he won the Soviet Footballer of the Year award three times and the Ukrainian Footballer of the Year award nine times (both records). In 1975, he was named European Footballer of the Year, winning the Ballon d'Or, becoming the second Soviet and the first Ukrainian player to achieve such a feat. As a coach, he has had two spells in charge of the Ukrainian national team, managing the team at the 2006 FIFA World Cup and UEFA Euro 2012. In 2011, Blokhin, together with Igor Belanov and Vitaliy Starukhin were named as "the legends of Ukrainian football" at the Victory of Football awards. 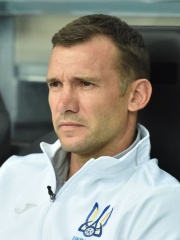 With an HPI of 71.10, Andriy Shevchenko is the 2nd most famous Ukrainian Soccer Player.  His biography has been translated into 73 different languages.

Andriy Mykolayovych Shevchenko, or Andrii Mykolaiovych Shevchenko (Ukrainian: Андрій Миколайович Шевченко, pronounced [ɐnˈd⁽ʲ⁾r⁽ʲ⁾ij mɪkoˈlɑjowɪtʃ ʃeu̯ˈtʃɛnko]; born 29 September 1976) is a Ukrainian football manager, a former professional football player and a former politician. Shevchenko played as a striker for Dynamo Kyiv, AC Milan, Chelsea and the Ukraine national team. He was most recently head coach of Serie A club Genoa. Shevchenko is considered one of the most lethal strikers to ever play the game. He is ranked as the seventh top goalscorer in all European competitions with 67 goals. With a tally of 175 goals scored for Milan, he is the second most prolific player in the history of the club, and is also the all-time top scorer of the Derby della Madonnina (the derby between Milan and their local rivals Inter Milan) with 14 goals. Furthermore, he is the all-time top scorer for the Ukrainian national team with 48 goals.Shevchenko's career has been highlighted by many awards, the most prestigious of which was the Ballon d'Or in 2004 (becoming the third Ukrainian, after Oleg Blokhin and Igor Belanov, to receive it). He won the UEFA Champions League in 2003 with Milan, and he has also won various league and cup titles in Ukraine, Italy and England. He was also a Champions League runner-up in 2005 and 2008. He was named in the FIFA World XI for 2005. In 2004, he was named as one of the Top 100 greatest living footballers as part of FIFA's 100th anniversary celebration.In his international career, the striker led Ukraine as captain to the quarter-finals in their first ever FIFA World Cup appearance in 2006, and also took part at UEFA Euro 2012 on home soil. On 28 July 2012, Shevchenko announced that he was quitting football for politics. He stood for election to the Ukrainian Parliament in the October 2012 Ukrainian parliamentary election, but his party failed to win parliamentary representation.He returned to football in 2016, as assistant coach of the Ukraine national team February to July, at the time led by Mykhaylo Fomenko. In July 2016, Shevchenko was appointed Ukraine's head coach, and led the nation to the quarter-finals at UEFA Euro 2020. 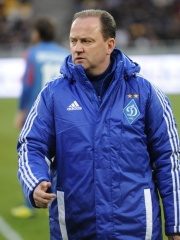 With an HPI of 65.74, Igor Belanov is the 3rd most famous Ukrainian Soccer Player.  His biography has been translated into 39 different languages.

Igor Ivanovich Belanov (Russian: И́горь Ива́нович Бела́нов) or Ihor Ivanovych Byelanov (Ukrainian: Ігор Іванович Бєланов; born 25 September 1960) is a former Ukrainian football player who played as a striker. He made a name for himself at Dynamo Kyiv, winning five major titles and being named European Footballer of the Year in 1986. He then spent six years in Germany with two teams, with little success. He was included in the Times's list of the top 100 World Cup footballers of all time. Belanov represented the Soviet Union at one World Cup and one European Championship. In 2011, Igor Belanov, together with Oleg Blokhin and Vitaliy Starukhin were named as the "legends of Ukrainian football" at the Victory of Football awards. 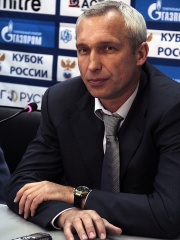 With an HPI of 63.78, Oleh Protasov is the 4th most famous Ukrainian Soccer Player.  His biography has been translated into 55 different languages.

Oleh Valeriyovych Protasov (Ukrainian: Олег Валерійович Протасов; born 4 February 1964) is a Ukrainian and Soviet former footballer who played as a striker. He was a key member of the Soviet Union national team throughout the 1980s; his 28 goals for the Soviet Union are second in the team's history, behind Oleh Blokhin's 42. It should be considered that his first name is often spelled as Oleg on most of international rosters, particularly during his playing career. Between October 2014 and March 2015, he was the head coach of Romanian club Astra Giurgiu. 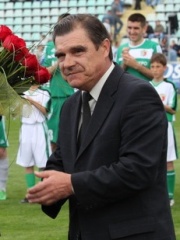 With an HPI of 63.48, Volodymyr Troshkin is the 5th most famous Ukrainian Soccer Player.  His biography has been translated into 17 different languages.

With an HPI of 63.11, Géza Kalocsay is the 6th most famous Ukrainian Soccer Player.  His biography has been translated into 18 different languages.

Géza Kalocsay (30 May 1913 – 26 September 2008) was a footballer and manager from Hungary, who played internationally for both Czechoslovakia (3 caps) and Hungary (2 caps).At the time of his death in September 2008 at the age of 95, he was the last surviving player to have represented either Czechoslovakia or Hungary before the Second World War. 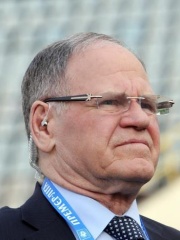 With an HPI of 62.08, Yozhef Sabo is the 7th most famous Ukrainian Soccer Player.  His biography has been translated into 18 different languages.

Yozhef Yozhefovich Sabo (Ukrainian: Йожеф Йожефович Сабо; Hungarian: Szabó József; born 29 February 1940) is a former Ukrainian football player and football manager. He is of Hungarian background. He is baptized as a Greek-Catholic. 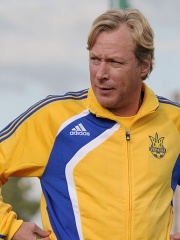 With an HPI of 61.40, Oleksiy Mykhaylychenko is the 8th most famous Ukrainian Soccer Player.  His biography has been translated into 30 different languages.

Oleksiy Oleksandrovych Mykhaylychenko (Ukrainian: Олексій Олександрович Михайличенко; born 30 March 1963) is a Ukrainian football coach and former professional player. He is a Distinguished Master of Sports of the USSR and a Distinguished Coach of Ukraine. During his playing days he was a versatile midfielder known for his stamina and passing capability. Also noted for his technique, Mykhaylychenko usually played as central attacking midfielder. Mykhaylychenko currently holds an administrative position at his home club, Dynamo Kyiv, as director of sport. His name is commonly romanised as Alexei Mikhailichenko from the Russian spelling of his name (Алексей Александрович Михайличенко). Mykhaylychenko played for Dynamo Kyiv, Sampdoria and Rangers. He then became a coach, starting with assistant coach to Dynamo Kyiv's legendary Valeriy Lobanovsky. Following the death of Lobanovsky, Mykhaylychenko replaced him as head coach. In 2004, he took charge of the Ukraine's national under-21 team. He was head coach of the Ukraine national football team senior side for two years after that. 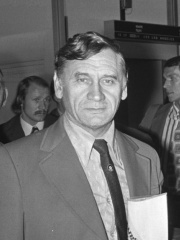 With an HPI of 61.40, Kazimierz Górski is the 9th most famous Ukrainian Soccer Player.  His biography has been translated into 20 different languages.

Kazimierz Klaudiusz Górski (2 March 1921 – 23 May 2006) was a coach of Poland national football team and honorary president of the Polish Football Association. He was also a football player, capped once for Poland. 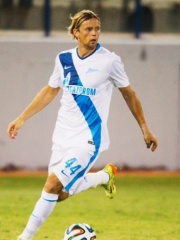 With an HPI of 60.92, Anatoliy Tymoshchuk is the 10th most famous Ukrainian Soccer Player.  His biography has been translated into 47 different languages.

Anatoliy Oleksandrovych Tymoshchuk (Ukrainian: Анатолій Олександрович Тимощук [ɐnɐˈtɔl⁽ʲ⁾i tɪmoˈʃtʃuk]; born 30 March 1979) is a Ukrainian football coach and a former midfielder, currently an assistant coach of the Russian Premier League club Zenit Saint Petersburg (since 2017). Tymoshchuk is regarded as one of the greatest players in the history of Shakhtar Donetsk and Zenit Saint Petersburg, and is also a former captain of the Ukraine national team. Tymoshchuk began his professional career with his local Volyn Lutsk. He moved to play for Ukrainian giants Shakhtar Donetsk, which he captained and won the Ukrainian Premier League, Ukrainian Cup and Ukrainian Super Cup titles with. In 2008, Tymoshchuk won the UEFA Cup and the UEFA Super Cup as captain of Zenit Saint Petersburg. He also won a Russian Premier League and Russian Super Cup title. After joining German club Bayern Munich, Tymoshchuk won the Bundesliga, DFB-Pokal and the DFB-Supercup titles. With Bayern, he also won the UEFA Champions League in 2013 and finished as runners-up in 2010 and 2012. A former captain of the Ukraine national team, Tymoshchuk is the nation's all-time most capped player with 144 caps. He took part in Ukraine's first-ever FIFA World Cup in 2006 and their first European Championship in 2012. He won the Ukrainian Footballer of the Year on three occasions. In 2022, the Ukrainian Association of Football stripped Tymoshchuk of his (Ukrainian) coaching licence and titles because he did not speak out against Russia's ongoing invasion of Ukraine and stayed on as assistant coach at Zenit Saint Petersburg.

Which Soccer Players were alive at the same time? This visualization shows the lifespans of the 15 most globally memorable Soccer Players since 1700.