This page contains a list of the greatest Austrian Soccer Players. The pantheon dataset contains 16,880 Soccer Players, 164 of which were born in Austria. This makes Austria the birth place of the 21st most number of Soccer Players behind Denmark and Poland. 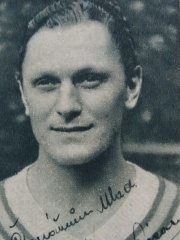 With an HPI of 71.63, Josef Bican is the most famous Austrian Soccer Player.  His biography has been translated into 35 different languages on wikipedia.

Josef "Pepi" Bican (25 September 1913 – 12 December 2001) was an Austrian-Czech professional footballer who played as a striker. He is the second-most prolific goalscorer in official matches in recorded history according to Rec.Sport.Soccer Statistics Foundation (RSSSF), with over 950 goals scored in 624 matches. According to the latest count, they scored at least 821 competitive goals (probably more, but this number is verified). According to RSSSF, Bican scored over 1813 total goals in over 1089 total matches. In total Bican scored 1137 unofficial goals in more than 514 games for Slavia Praha, with a ratio of 1.79 goals per game across his almost 15-year career at the club in total.Bican began his professional career at Rapid Vienna in 1931. After four years at Rapid, he moved to local rivals Admira Vienna. Bican won four league titles during his time in Austria, moved to Slavia Praha in 1937, where he stayed until 1948, and became the club's all-time top goalscorer. He later played for FC Vitkovice, FC Hradec Králové, and Dynamo Praha, retiring in 1955 as the all-time top goalscorer in the Czechoslovak First League with 447 goals.Bican was a member of the Austrian Wunderteam of the 1930s and represented the nation at the 1934 FIFA World Cup, where they reached the semi-finals. He later switched allegiance to the Czechoslovakia national football team, but a clerical error related to his transfer of national team precluded him from playing in the 1938 FIFA World Cup. Bican was a tall and powerful player, with the technical ability to play with both feet, and had considerable pace. During his athletic prime, he was reportedly capable of running 100 metres in 10.8 seconds, which was not far off the leading sprinters of his time.After his retirement from playing, Bican became a manager, and coached various teams from the 1950s until the 1970s. In 1998, Bican was given a "Medal of Honour" by the International Federation of Football History & Statistics (IFFHS) for being among the world's most successful top division goalscorers of all time. In 2000, the IFFHS awarded Bican the "Golden Ball" in recognition of his status as the greatest goalscorer of the 20th century. The award was based on how many times a player had been top scorer in his domestic league, a feat which Bican achieved 12 times.

With an HPI of 54.71, Franz Binder is the 2nd most famous Austrian Soccer Player.  His biography has been translated into 21 different languages. 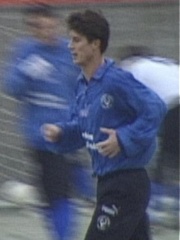 With an HPI of 54.33, Brian Laudrup is the 3rd most famous Austrian Soccer Player.  His biography has been translated into 44 different languages.

Brian Laudrup (Danish pronunciation: [ˈpʁiːæn ˈlɑwˀtʁɔp], born 22 February 1969) is a Danish former professional footballer who played as a winger, forward or as a midfielder, and was regarded as one of the most talented players of his generation. He currently works as a football commentator, pundit and analyst on Kanal 5 and 6'eren. Laudrup manages a football academy for marginalised youth, along with former international goalkeeper Lars Høgh.During his playing career which eventually stalled due to injury, Laudrup represented a number of European clubs. He started with Danish club Brøndby, winning two Danish championships in the late 1980s. He then played for German and Italian clubs, winning the 1993–94 Serie A as well as the 1994 UEFA Champions League title with Milan. He was a vital part of the Rangers team which dominated the Scottish Premier Division in the 1990s, winning three championships, among others. He won the 1998 UEFA Super Cup in his brief stint with English club Chelsea, and had a brief spell with Copenhagen in Denmark, before ending his career with Ajax in 2000. Laudrup also played 82 matches and scored 21 goals for the Denmark national team, and was a vital part of the Danish teams which won UEFA Euro 1992 and the 1995 Confederations Cup. Laudrup won the Danish Football Player of the Year award a record four times. He was named by FIFA as the fifth-best player in the world in 1992 and was named by Pelé as one of the top 125 greatest living footballers at the FIFA 100 ceremony in March 2004, alongside his older brother Michael Laudrup. 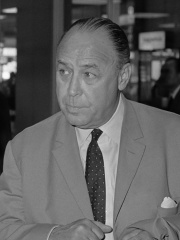 With an HPI of 54.29, Karl Rappan is the 4th most famous Austrian Soccer Player.  His biography has been translated into 21 different languages.

Karl Rappan (26 September 1905 – 2 January 1996) was an Austrian footballer and coach. He played and managed mostly in Switzerland, where he won multiple titles. He had four tenures as coach of the Switzerland national team, which he managed in three World Cups, and is the all-time leader in matches won as coach of the Swiss team. He introduced a major football strategy known as the "bolt", which gave origin to the catenaccio system. He also helped create the UEFA Intertoto Cup.

With an HPI of 52.90, Friedrich Koncilia is the 5th most famous Austrian Soccer Player.  Her biography has been translated into 42 different languages.

Friedrich Koncilia (born 25 February 1948) is an Austrian former professional football who played as a goalkeeper. 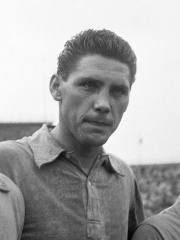 With an HPI of 52.43, Ernst Ocwirk is the 6th most famous Austrian Soccer Player.  His biography has been translated into 21 different languages.

Ernst Ocwirk (7 March 1926 – 23 January 1980) was an Austrian football player and coach. He is regarded as one of the greatest Austrian footballers of all time. He spent the majority of his playing and coaching years between Austria and Italy, being both player and manager for FK Austria Vienna and Serie A club Sampdoria. He also went on to become a member of the Austria national team, which he led to a third-place finish at the 1954 World Cup as its captain. Nicknamed Clockwork by the British for his midfield consistency, as well as the nickname being suggested by his surname, he is often cited as the last of the old-fashioned attacking centre-halves; he was known for his aesthetic and technical style of playing, his heading ability, excellent timing (both in offensive and defensive tasks) and his passing range; particularly his long passing ability. The fans loved him for his modest and fair personality. The international media of the era saw Ocwirk as "the best centerhalf in the world". He is considered one of the greatest central midfielders of all time.

With an HPI of 51.95, Richard Kohn is the 7th most famous Austrian Soccer Player.  His biography has been translated into 18 different languages.

With an HPI of 51.93, Rudolf Vytlačil is the 8th most famous Austrian Soccer Player.  His biography has been translated into 17 different languages.

Rudolf Vytlačil (Czech pronunciation: [ˈrudolv ˈvɪtlatʃɪl]]; German: Rudolf "Rudi" Vytlacil) (9 February 1912, Schwechat – 1 June 1977) was an Czechoslovak football player and manager. Born in Schwechat on outskirts of Vienna, Vytlačil started his career at the local club Phönix Schwechat. Later he played for SK Slovan Wien, SK Rapid Wien and Favoritner Sportclub in the Austrian Championship and for Slavia Prague in the Czechoslovak Championship. He was the coach of the Czechoslovak national team when they finished as runners-up in the 1962 FIFA World Cup and was in charge of Bulgaria at the 1966 FIFA World Cup. Vytlačil coached several clubs, including 1947–1948 Radomiak Radom from Poland, Levski Sofia (won two Bulgarian championships in 1965 and 1970, and one Bulgarian Cup in 1970), TJ Baník Ostrava OKD, Tatran Teplice (now FK Teplice), TJ Gottwaldov (now FC Zlín) and, from 1966 to 1968, his former club SK Rapid Wien. With Rapid he won the Austrian championship twice and reached the quarterfinal of the European Champions Cup after a victory against Real Madrid.

With an HPI of 51.80, Erich Probst is the 9th most famous Austrian Soccer Player.  His biography has been translated into 25 different languages. 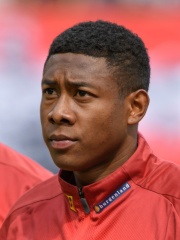 With an HPI of 51.33, David Alaba is the 10th most famous Austrian Soccer Player.  His biography has been translated into 56 different languages.

David Olatukunbo Alaba (born 24 June 1992) is an Austrian professional footballer who plays as a centre-back or left-back for La Liga club Real Madrid and captains the Austria national team. He is regarded as one of the best left-backs of his generation.Alaba started out in Bayern's youth system before being promoted to the reserve team for the 2009–10 season. In January 2011, Alaba joined TSG 1899 Hoffenheim on loan until the end of the 2010–11 season. He returned to Bayern at the start of the 2011–12 season, where he went on to become a regular member of the first-team squad. Alaba made over 400 appearances for Bayern Munich, winning 27 honours including ten Bundesliga titles and two UEFA Champions League titles in 2013 and 2020, both as part of trebles. During his time in Germany, he was named in the UEFA Team of the Year three times. In 2021, Alaba signed for Real Madrid; he won the 2021–22 La Liga, Supercopa and Champions League title in his debut season. Alaba is Austria's second youngest player to play for their senior national team, debuting for them in 2009 as a 17-year-old. He has earned over 90 caps and represented his country at UEFA Euro 2016 and UEFA Euro 2020. He was voted Austrian Footballer of the Year on eight occasions (including six consecutive times from 2011 to 2016).