This page contains a list of the greatest Polish Philosophers. The pantheon dataset contains 1,089 Philosophers, 25 of which were born in Poland. This makes Poland the birth place of the 11th most number of Philosophers behind China and Spain. 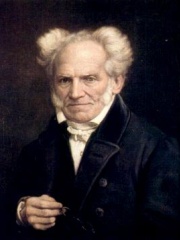 With an HPI of 88.67, Arthur Schopenhauer is the most famous Polish Philosopher.  His biography has been translated into 93 different languages on wikipedia.

Arthur Schopenhauer ( SHOH-pən-how-ər, German: [ˈaɐtʊɐ ˈʃoːpm̩haʊɐ] (listen); 22 February 1788 – 21 September 1860) was a German philosopher. He is best known for his 1818 work The World as Will and Representation (expanded in 1844), which characterizes the phenomenal world as the product of a blind noumenal will. Building on the transcendental idealism of Immanuel Kant, Schopenhauer developed an atheistic metaphysical and ethical system that rejected the contemporaneous ideas of German idealism. He was among the first thinkers in Western philosophy to share and affirm significant tenets of Indian philosophy, such as asceticism, denial of the self, and the notion of the world-as-appearance. His work has been described as an exemplary manifestation of philosophical pessimism.Though his work failed to garner substantial attention during his lifetime, Schopenhauer had a posthumous impact across various disciplines, including philosophy, literature, and science. His writing on aesthetics, morality, and psychology have influenced many thinkers and artists. Those who have cited his influence include philosophers Emil Cioran, Friedrich Nietzsche and Ludwig Wittgenstein, scientists Erwin Schrödinger and Albert Einstein, psychoanalysts Sigmund Freud and Carl Jung, writers Leo Tolstoy, Herman Melville, Thomas Mann, Hermann Hesse, Machado de Assis, Jorge Luis Borges, Marcel Proust and Samuel Beckett, and composers Richard Wagner, Johannes Brahms, Arnold Schoenberg and Gustav Mahler. 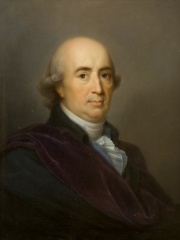 With an HPI of 80.66, Johann Gottfried Herder is the 2nd most famous Polish Philosopher.  His biography has been translated into 62 different languages. 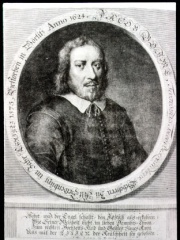 With an HPI of 77.50, Jakob Böhme is the 3rd most famous Polish Philosopher.  His biography has been translated into 45 different languages.

Jakob Böhme (; German: [ˈbøːmə]; 24 April 1575 – 17 November 1624) was a German philosopher, Christian mystic, and Lutheran Protestant theologian. He was considered an original thinker by many of his contemporaries within the Lutheran tradition, and his first book, commonly known as Aurora, caused a great scandal. In contemporary English, his name may be spelled Jacob Boehme; in seventeenth-century England it was also spelled Behmen, approximating the contemporary English pronunciation of the German Böhme. Böhme had a profound influence on later philosophical movements such as German idealism and German Romanticism. Hegel described Böhme as "the first German philosopher". 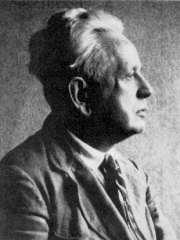 With an HPI of 77.17, Ernst Cassirer is the 4th most famous Polish Philosopher.  His biography has been translated into 46 different languages.

Ernst Alfred Cassirer ( kah-SEER-ər, kə-, German: [ˈɛʁnst kaˈsiːʁɐ]; July 28, 1874 – April 13, 1945) was a German philosopher. Trained within the Neo-Kantian Marburg School, he initially followed his mentor Hermann Cohen in attempting to supply an idealistic philosophy of science. After Cohen's death in 1918, Cassirer developed a theory of symbolism and used it to expand phenomenology of knowledge into a more general philosophy of culture. Cassirer was one of the leading 20th-century advocates of philosophical idealism. His most famous work is the Philosophy of Symbolic Forms (1923–1929). Though his work received a mixed reception shortly after his death, more recent scholarship has remarked upon Cassirer's role as a strident defender of the moral idealism of the Enlightenment era and the cause of liberal democracy at a time when the rise of fascism had made such advocacy unfashionable. Within the international Jewish community, Cassirer's work has additionally been seen as part of a long tradition of thought on ethical philosophy. 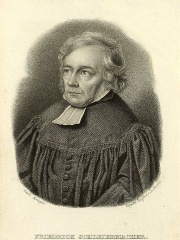 With an HPI of 77.16, Friedrich Schleiermacher is the 5th most famous Polish Philosopher.  His biography has been translated into 49 different languages.

Friedrich Daniel Ernst Schleiermacher (German: [ˈfʁiːdʁɪç ˈʃlaɪɐˌmaχɐ]; November 21, 1768 – February 12, 1834) was a German Reformed theologian, philosopher, and biblical scholar known for his attempt to reconcile the criticisms of the Enlightenment with traditional Protestant Christianity. He also became influential in the evolution of higher criticism, and his work forms part of the foundation of the modern field of hermeneutics. Because of his profound effect on subsequent Christian thought, he is often called the "Father of Modern Liberal Theology" and is considered an early leader in liberal Christianity. The neo-orthodoxy movement of the twentieth century, typically (though not without challenge) seen to be spearheaded by Karl Barth, was in many ways an attempt to challenge his influence. As a philosopher he was a leader of German Romanticism. 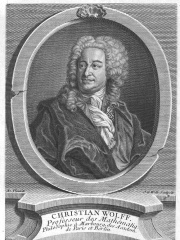 With an HPI of 76.87, Christian Wolff is the 6th most famous Polish Philosopher.  His biography has been translated into 48 different languages.

Christian Wolff (less correctly Wolf, German: [vɔlf]; also known as Wolfius; ennobled as Christian Freiherr von Wolff in 1745; 24 January 1679 – 9 April 1754) was a German philosopher. Wolff was the most eminent German philosopher between Leibniz and Kant. His main achievement was a complete oeuvre on almost every scholarly subject of his time, displayed and unfolded according to his demonstrative-deductive, mathematical method, which perhaps represents the peak of Enlightenment rationality in Germany.Following Gottfried Wilhelm Leibniz, Wolff also wrote in German as his primary language of scholarly instruction and research, although he did translate his works into Latin for his transnational European audience. A founding father of, among other fields, economics and public administration as academic disciplines, he concentrated especially in these fields, giving advice on practical matters to people in government, and stressing the professional nature of university education. 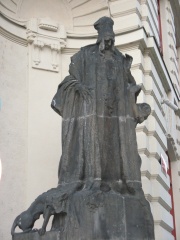 With an HPI of 74.23, Judah Loew ben Bezalel is the 7th most famous Polish Philosopher.  His biography has been translated into 30 different languages.

Judah Loew ben Bezalel (Hebrew: יהודה ליווא בן בצלאל; between 1512 and 1526 – 17 September 1609), also known as Rabbi Loew (alt. Löw, Loewe, Löwe or Levai), the Maharal of Prague (Hebrew: מהר״ל מפראג), or simply the Maharal (the Hebrew acronym of "Moreinu ha-Rav Loew", 'Our Teacher, Rabbi Loew'), was an important Talmudic scholar, Jewish mystic, and philosopher who, for most of his life, served as a leading rabbi in the cities of Mikulov in Moravia and Prague in Bohemia. Within the world of Torah and Talmudic scholarship, Loew is known for his works on Jewish philosophy and Jewish mysticism and his work Gur Aryeh al HaTorah, a supercommentary on Rashi's Torah commentary. He is also the subject of a 19th-century legend that he created the Golem of Prague, an animate being fashioned from clay. 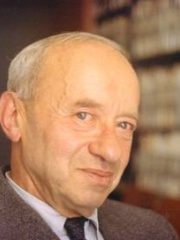 With an HPI of 72.51, Alfred Tarski is the 8th most famous Polish Philosopher.  His biography has been translated into 46 different languages.

Alfred Tarski (, born Alfred Teitelbaum; January 14, 1901 – October 26, 1983) was a Polish-American logician and mathematician. A prolific author best known for his work on model theory, metamathematics, and algebraic logic, he also contributed to abstract algebra, topology, geometry, measure theory, mathematical logic, set theory, and analytic philosophy. Educated in Poland at the University of Warsaw, and a member of the Lwów–Warsaw school of logic and the Warsaw school of mathematics, he immigrated to the United States in 1939 where he became a naturalized citizen in 1945. Tarski taught and carried out research in mathematics at the University of California, Berkeley, from 1942 until his death in 1983.His biographers Anita Burdman Feferman and Solomon Feferman state that, "Along with his contemporary, Kurt Gödel, he changed the face of logic in the twentieth century, especially through his work on the concept of truth and the theory of models." 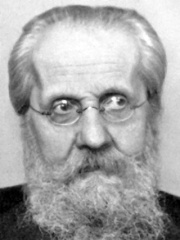 With an HPI of 70.69, Heinrich Rickert is the 9th most famous Polish Philosopher.  His biography has been translated into 26 different languages. 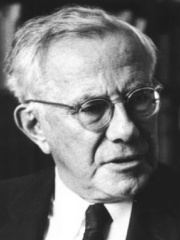 With an HPI of 70.50, Paul Tillich is the 10th most famous Polish Philosopher.  His biography has been translated into 39 different languages.

Paul Johannes Tillich (August 20, 1886 – October 22, 1965) was a German-American Christian existentialist philosopher and Lutheran Protestant theologian who is widely regarded as one of the most influential theologians of the twentieth century. Tillich taught at a number of universities in Germany before immigrating to the United States in 1933, where he taught at Union Theological Seminary, Harvard Divinity School, and the University of Chicago. Among the general public, Tillich is best known for his works The Courage to Be (1952) and Dynamics of Faith (1957), which introduced issues of theology and culture to a general readership. In academic theology, he is best known for his major three-volume work Systematic Theology (1951–63), in which he developed his "method of correlation", an approach that explores the symbols of Christian revelation as answers to the problems of human existence raised by contemporary existential analysis. Unlike mainstream interpretations of existentialism which emphasized the priority of existence over essence, Tillich considered existentialism "possible only as an element in a larger whole, as an element in a vision of the structure of being in its created goodness, and then as a description of man's existence within that framework."Tillich's unique integration of essentialism and existentialism, as well as his sustained engagement with ontology in the Systematic Theology and other works, has attracted scholarship from a variety of influential thinkers including Karl Barth, Reinhold Niebuhr, H. Richard Niebuhr, George Lindbeck, Erich Przywara, Langdon Gilkey, James Luther Adams, Avery Cardinal Dulles, Dietrich Bonhoeffer, Sallie McFague, Richard John Neuhaus, David Novak, John D. Caputo, Thomas Merton, Robert W. Jenson, Thomas F. O'Meara, and Martin Luther King Jr. According to H. Richard Niebuhr, "[t]he reading of Systematic Theology can be a great voyage of discovery into a rich and deep, and inclusive and yet elaborated, vision and understanding of human life in the presence of the mystery of God." John Herman Randall Jr. lauded the Systematic Theology as "beyond doubt the richest, most suggestive, and most challenging philosophical theology our day has produced."In addition to Tillich's work in theology, he also authored many works in ethics, the philosophy of history, and comparative religion. Tillich's work continues to be studied and discussed around the world, and the North American Paul Tillich Society, Deutsche Paul-Tillich-Gesellschaft, and l'Association Paul Tillich d'expression française regularly host international conferences and seminars on his thought and its possibilities.

Which Philosophers were alive at the same time? This visualization shows the lifespans of the 18 most globally memorable Philosophers since 1700.