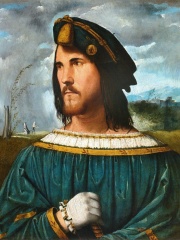 With an HPI of 76.08, Cesare Borgia is the most famous Italian Military Personnel.  His biography has been translated into 50 different languages on wikipedia.

Cesare Borgia (Italian pronunciation: [ˈtʃeːzare ˈbɔrdʒa, ˈtʃɛː-]; Valencian: Cèsar Borja [ˈsɛzaɾ ˈbɔɾdʒa]; Spanish: César Borja [ˈθesaɾ ˈβoɾxa]; 13 September 1475 – 12 March 1507) was an Italian ex-cardinal and condottiero (mercenary leader) of Aragonese (Spanish) origin, whose fight for power was a major inspiration for The Prince by Niccolò Machiavelli. He was an illegitimate son of Pope Alexander VI and member of the Spanish-Aragonese House of Borgia.After initially entering the Church and becoming a cardinal on his father's election to the Papacy, he became, after the death of his brother in 1498, the first person to resign a cardinalate. He served as a condottiero for King Louis XII of France around 1500, and occupied Milan and Naples during the Italian Wars. At the same time he carved out a state for himself in Central Italy, but after his father's death he was unable to retain power for long. According to Machiavelli, this was not due to a lack of foresight, but his error in creating a new pope. 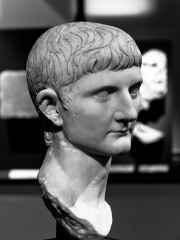 With an HPI of 72.77, Germanicus is the 2nd most famous Italian Military Personnel.  His biography has been translated into 55 different languages.

Germanicus Julius Caesar (24 May 15 BC – 10 October AD 19) was an ancient Roman general, known for his campaigns in Germania. The son of Nero Claudius Drusus and Antonia the Younger, Germanicus was born into an influential branch of the patrician gens Claudia. The agnomen Germanicus was added to his full name in 9 BC when it was posthumously awarded to his father in honour of his victories in Germania. In AD 4, he was adopted by his paternal uncle Tiberius, who succeeded Augustus as Roman emperor a decade later. As a result, Germanicus became an official member of the gens Julia, another prominent family, to which he was related on his mother's side. His connection to the Julii was further consolidated through a marriage between himself and Agrippina the Elder, a granddaughter of Augustus. He was also the father of Caligula, the maternal grandfather of Nero, and the older brother of Claudius. During the reign of Augustus, Germanicus enjoyed an accelerated political career as the heir of the emperor's heir, entering the office of quaestor five years before the legal age in AD 7. He held that office until AD 11, and was elected consul for the first time in AD 12. The year after, he was made proconsul of Germania Inferior, Germania Superior, and all of Gaul. From there he commanded eight legions, about one-third of the entire Roman army, which he led against the Germanic tribes in his campaigns from AD 14 to 16. He avenged the Roman Empire's defeat in the Teutoburg Forest and retrieved two of the three legionary eagles that had been lost during the battle. In AD 17, he returned to Rome, where he received a triumph before leaving to reorganise the provinces of Asia Minor, whereby he incorporated the provinces of Cappadocia and Commagene in AD 18. While in the eastern provinces, he came into conflict with the governor of Syria, Gnaeus Calpurnius Piso. During their feud, Germanicus became ill in Antioch and died on 10 October AD 19. His death has been attributed to poison by ancient sources, but that was never proven. As a famous general, he was widely popular and regarded as the ideal Roman long after his death. To the Roman people, Germanicus was the Roman equivalent of Alexander the Great due to the nature of his death at a young age, his virtuous character, his dashing physique, and his military renown. 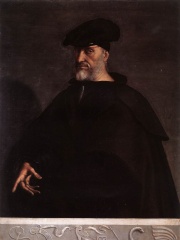 With an HPI of 70.86, Andrea Doria is the 3rd most famous Italian Military Personnel.  His biography has been translated into 37 different languages.

Andrea Doria, Prince of Melfi (Italian: [anˈdrɛːa ˈdɔːrja]; Ligurian: Drîa Döia [ˈdɾiːa ˈdɔːja]; 30 November 1466 – 25 November 1560) was a Genoese statesman, condottiero, and admiral, who played a key role in the Republic of Genoa during his lifetime.As the ruler of Genoa, Doria reformed the Republic's constitution. Originally elected for life, the Doge's office was reduced to two years. At the same time plebeians were declared ineligible, and the appointment of the doge was entrusted to the members of the great and the little councils. His reformed constitution of the Republic of Genoa would last until the end of the republic in 1797.From 1528 until his death, Doria exercised a predominant influence in the councils of the Genoese republic. He is also considered the foremost naval leader of his time. Several ships were named in honour of the admiral, the most famous being the Italian passenger liner SS Andrea Doria, launched in 1951, which sank following a collision in 1956. 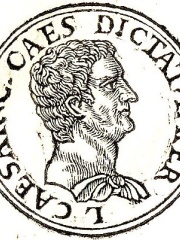 With an HPI of 69.64, Gaius Julius Caesar is the 4th most famous Italian Military Personnel.  His biography has been translated into 28 different languages.

Gaius Julius Caesar(; Latin: [ˈɡaːiʊs ˈjuːliʊs ˈkae̯sar]; c. 140 BC – 85 BC) was a Roman senator, a supporter of his brother-in-law, Gaius Marius, and the father of Roman dictator Julius Caesar. 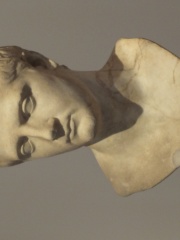 With an HPI of 69.01, Nero Claudius Drusus is the 5th most famous Italian Military Personnel.  His biography has been translated into 42 different languages.

Nero Claudius Drusus Germanicus (38–9 BC), also called Drusus the Elder, was a Roman politician and military commander. He was a patrician Claudian on his birth father's side but his maternal grandmother was from a plebeian family. He was the son of Livia Drusilla and the legal stepson of her second husband, the Emperor Augustus. He was also brother of the Emperor Tiberius, father to both the Emperor Claudius and general Germanicus, paternal grandfather of the Emperor Caligula, and maternal great-grandfather of the Emperor Nero. He launched the first major Roman campaigns across the Rhine and began the conquest of Germania, becoming the first Roman general to reach the Weser and Elbe rivers. In 12 BC, Drusus led a successful campaign into Germania, subjugating the Sicambri. Later that year he led a naval expedition against Germanic tribes along the North Sea coast, conquering the Batavi and the Frisii, and defeating the Chauci near the mouth of the Weser. In 11 BC, he conquered the Usipetes and the Marsi, extending Roman control to the Upper Weser. In 10 BC, he launched a campaign against the Chatti and the resurgent Sicambri, subjugating both. The following year, while serving as consul, he conquered the Mattiaci and defeated the Marcomanni and the Cherusci, the latter near the Elbe. However, Drusus died later that year. 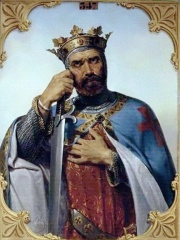 With an HPI of 68.94, Bohemond I of Antioch is the 6th most famous Italian Military Personnel.  His biography has been translated into 46 different languages.

Bohemond I of Antioch (c. 1054 – 5 or 7 March 1111), also known as Bohemond of Taranto, was the prince of Taranto from 1089 to 1111 and the prince of Antioch from 1098 to 1111. He was a leader of the First Crusade, leading a contingent of Normans on the quest eastward. Knowledgable about the Byzantine Empire through earlier campaigns with his father, he was the most experienced military leader of the crusade. 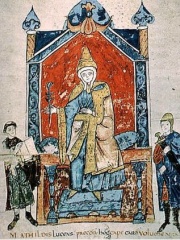 With an HPI of 66.74, Matilda of Tuscany is the 7th most famous Italian Military Personnel.  Her biography has been translated into 37 different languages.

Matilda of Tuscany (Italian: Matilde di Canossa [maˈtilde di kaˈnɔssa], Latin: Matilda, Mathilda; c. 1046 – 24 July 1115 or Matilda of Canossa after her ancestral castle of Canossa), also referred to as la Gran Contessa ("the Great Countess"), was a member of the House of Canossa (also known as the Attonids) in the second half of the eleventh century. Matilda was one of the most important governing figures of the Italian Middle Ages. She reigned in a period of constant battles, political intrigues and Roman-Catholic excommunications, and was able to demonstrate an innate and skilled strategic leadership capacity in both military and diplomatic matters. She ruled as a feudal margravine and, as a relative of the imperial Salian dynasty, she brokered a settlement in the so-called Investiture Controversy; in this extensive conflict with the emerging reform Papacy over the relationship between spiritual (sacerdotium) and secular (regnum) power, Pope Gregory VII dismissed and excommunicated the Holy Roman Emperor Henry IV in 1076. At the same time, Matilda came into possession of a substantial territory that included present-day Lombardy, Emilia, Romagna and Tuscany, and made the Canossa Castle, in the Apennines south of Reggio, the centre of her domains.In January 1077, Henry IV was, after his famous penitential walk in front of the Canossa (Latin: Canusia) Castle, accepted back into the church community by the Pope. The understanding between the Emperor and the Pope was short-lived, however. In the conflicts with Henry IV that arose a little later, Matilda put all her military and material resources into the service of the Papacy from 1080. Her court became a refuge for many displaced persons during the turmoil of the investiture dispute and experienced a cultural boom. Even after Pope Gregory VII's death in 1085, Matilda remained an important pillar of the Reform Church. Between 1081 and 1098, the Canossa rule fell into a major crisis due to the grueling disputes with Henry IV. The historical record is sparse for this time. A turning point resulted from a coalition of Matilda with the southern German dukes, who were in opposition to Henry IV. After Henry IV's retreat in 1097 past the Alps to the empire's north, a power vacuum developed in Italy. The struggle between regnum and sacerdotium changed the social and rulership structure of the Italian cities permanently and gave them space for emancipation from foreign rule and communal development. From autumn 1098 Matilda was able to regain many of her lost domains. Until the end she tried to bring the cities under her control. After 1098, she increasingly used the opportunities offered to her to consolidate her rule again. In her final years she was worried about her own memory, which is why the childless Matilda focused her donation activity on the Polirone Abbey rather than find a suitable heir. Between 6 and 11 May 1111, Matilda was reportedly crowned Imperial Vicar and Vice-Queen of Italy by Henry V, Holy Roman Emperor at the Castle of Bianello (Quattro Castella, Reggio Emilia), following the account of Donizo. With her death, the House of Canossa became extinct in 1115. Popes and emperors fought over their rich inheritance, called the "Matildine domains", well into the 13th century. Matilda became a myth in Italy, which found its expression in numerous artistic, musical and literary designs as well as miracle stories and legends. This legacy reached its peak during the Counter-Reformation and the Baroque Period. Pope Urban VIII had Matilda's body transferred to Rome in 1630, where she was the first woman to be buried in Saint Peter's Basillica. 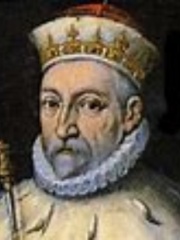 With an HPI of 66.12, Giovanni Giustiniani is the 8th most famous Italian Military Personnel.  His biography has been translated into 27 different languages.

Giovanni Giustiniani Longo (Greek: Ιωάννης Λόνγος Ιουστινιάνης, Iōánnēs Lóngos Ioustiniánēs; Latin: Ioannes Iustinianus Longus; 1418 – 1 June 1453) was a Genoese nobleman, captain, and defender of Constantinople during its siege in 1453. He was instrumental in its defense and commanded 700 men, as well as leading the land forces protecting the city. 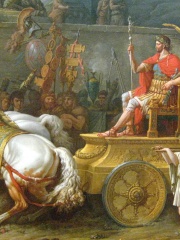 With an HPI of 66.05, Lucius Aemilius Paullus Macedonicus is the 9th most famous Italian Military Personnel.  His biography has been translated into 38 different languages.

Lucius Aemilius Paullus Macedonicus (c. 229 – 160 BC) was a two-time consul of the Roman Republic and a general who conquered Macedon, putting an end to the Antigonid dynasty in the Third Macedonian War.

With an HPI of 65.48, Gaius Claudius Glaber is the 10th most famous Italian Military Personnel.  His biography has been translated into 23 different languages.

Gaius Claudius Glaber was a military commander of the late Roman Republic, holding the offices of legate and military praetor in 73 BC. He was defeated in the Battle of Mount Vesuvius against the forces of Spartacus during the Third Servile War.