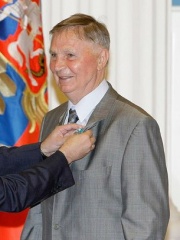 With an HPI of 66.93, Viktor Tikhonov is the most famous Russian Hockey Player.  His biography has been translated into 26 different languages on wikipedia.

Viktor Vasilyevich Tikhonov (Russian: Виктор Васильевич Тихонов; 4 June 1930 – 24 November 2014) was a Soviet ice hockey player and coach. Tikhonov was a defenceman with VVS Moscow and Dynamo Moscow from 1949 to 1963, winning four national championships. He was the coach of the Soviet team when it was the dominant team in the world, winning eight World Championship gold medals, as well as Olympic gold in 1984, 1988, and 1992. Tikhonov also led CSKA Moscow to twelve consecutive league championships. He was named to the IIHF Hall of Fame as a builder in 1998. 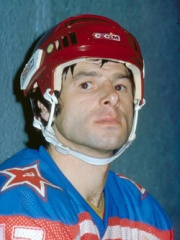 With an HPI of 65.50, Valeri Kharlamov is the 2nd most famous Russian Hockey Player.  His biography has been translated into 34 different languages.

Valeri Borisovich Kharlamov (Russian: Вале́рий Бори́сович Харла́мов, IPA: [vɐˈlʲerʲɪj bɐˈrʲisəvʲɪtɕ xɐrˈlaməf]; 14 January 1948 – 27 August 1981) was an ice hockey forward who played for CSKA Moscow in the Soviet League from 1967 until his death in 1981. Although small in stature, Kharlamov was a speedy, intelligent, skilled and dominant player, being named the Soviet Championship League most valuable player in 1972 and 1973. An offensive player, who was considered very creative on the ice, he also led the league in scoring in 1972. He was also a gifted skater who was able to make plays at top speed. Kharlamov was considered one of the best players of his era, as well as one of the greatest players of all time. In international play, Kharlamov represented the Soviet Union at 11 World Championships, winning 8 gold medals, 2 silvers and 1 bronze. He participated in three Olympics, 1972, 1976 and 1980, finishing with two gold medals and a silver, and participated in the 1972 Summit Series against Canada. He spent most of his career playing on a line with Vladimir Petrov and Boris Mikhailov, and this trio is considered one of the best in the history of ice hockey. Kharlamov was killed in a car accident in 1981. After his death, Kharlamov was elected to the International Ice Hockey Federation Hall of Fame, the Hockey Hall of Fame, the Russian Hockey Hall of Fame and was selected as one of the forwards on the IIHF Centennial All-Star Team. The Kharlamov Trophy is presented annually to the best Russian hockey player in the NHL, as chosen by his peers. The Kharlamov Cup is presented to the champion of the Minor Hockey League playoffs, and the Kontinental Hockey League named one of their four divisions after him. 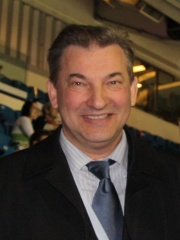 With an HPI of 64.97, Vladislav Tretiak is the 3rd most famous Russian Hockey Player.  His biography has been translated into 40 different languages.

Vladislav Aleksandrovich Tretiak, MSM (treet-YAK, Russian: Владислав Александрович Третьяк, IPA: [trʲɪˈtʲjak]; born 25 April 1952) is a Russian former goaltender for the Soviet Union national ice hockey team. Considered to be one of the greatest goaltenders in the history of the sport, he was voted one of six players to the International Ice Hockey Federation's (IIHF) Centennial All-Star Team in a poll conducted by a group of 56 experts from 16 countries. He is the current president of the Ice Hockey Federation of Russia and was the general manager of the Russian 2010 Winter Olympic team. 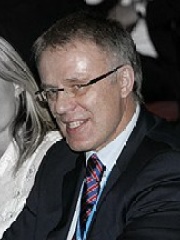 With an HPI of 60.76, Viacheslav Fetisov is the 4th most famous Russian Hockey Player.  His biography has been translated into 21 different languages.

Viacheslav Alexandrovich "Slava" Fetisov (fe-TEE-sov, Russian: Вячеслав Александрович Фетисов, Vjačeslav Aleksandrovič Fetisov; born 20 April 1958) is a Russian former professional ice hockey defenceman. He played for HC CSKA Moscow for 13 seasons before joining the National Hockey League (NHL), where he played with the New Jersey Devils and Detroit Red Wings. With the Wings, he won back-to-back Stanley Cups and was part of the team's Russian Five unit. After retiring from his playing career, he became the assistant coach for the New Jersey Devils. Having a very successful four years, he helped get the team to two Stanley Cup finals and one Stanley Cup victory. In addition to that, he won two Olympic gold medals and seven world championships. His Stanley Cup wins, Olympic gold medals, and World Championship wins make him a member of his sport's prestigious Triple Gold Club. Fetisov was instrumental in breaking the barrier that had prevented Soviet players from leaving the Soviet Union to join the NHL. His actions not only resulted in a number of top Soviet players joining the NHL, but encouraged many of the best players from all over Europe to go to North America. Internationally, he was a long-time captain for the Soviet Union national team and is a two-time Olympic champion. In 2002, Fetisov led the Russian Ice Hockey Olympic team as GM and Head Coach, attaining a bronze medal. Considered one of the best defencemen of all time, he was voted as one of six players to the International Ice Hockey Federation's (IIHF) Centennial All-Star Team. After retiring as a coach, Fetisov embarked on a political and executive career. After the 2002 Winter Olympics, Russian President Vladimir Putin offered him the position as Minister of Sport, a post he held until 2008. He is a member of the upper house of the Federal Assembly of Russia, the Federation Council representing Primorsky Krai, the founder and chairman of the KHL's Board of Directors and chair of the World Anti-Doping Agency (WADA) Athletes Committee. Fetisov was president of professional Russian hockey club HC CSKA Moscow of the Kontinental Hockey League (KHL). He was also the key member of the bidding committee that presented the Sochi 2014 proposal to the IOC in Guatemala in 2007, when a city was being chosen to host the 2014 Winter Olympics. 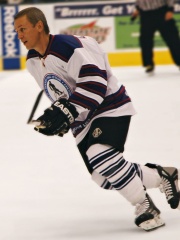 With an HPI of 59.46, Igor Larionov is the 5th most famous Russian Hockey Player.  His biography has been translated into 21 different languages.

Igor Nikolayevich Larionov (Russian: Игорь Николаевич Ларионов; born 3 December 1960) is a Russian ice hockey coach, sports agent and former professional ice hockey player, known as "the Professor". Along with Viacheslav Fetisov, he was instrumental in forcing the Soviet government to let Soviet players compete in the National Hockey League (NHL). He primarily played the centre position. Larionov won three Stanley Cup championships with the Detroit Red Wings (1997, 1998, 2002) and was inducted as a member of the Hockey Hall of Fame on 10 November 2008. He was also a member of Detroit's famed Russian Five line. 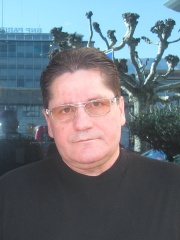 With an HPI of 59.40, Sergei Makarov is the 6th most famous Russian Hockey Player.  His biography has been translated into 25 different languages.

Sergei Mikhailovich Makarov (Russian: Серге́й Миха́йлович Мака́ров; born 19 June 1958) is a Russian former ice hockey right wing and two-time Olympic gold medalist. He was voted one of six players to the International Ice Hockey Federation's (IIHF) Centennial All-Star Team in a poll conducted by a group of 56 experts from 16 countries. 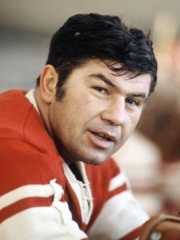 With an HPI of 58.71, Viktor Konovalenko is the 7th most famous Russian Hockey Player.  His biography has been translated into 16 different languages.

Viktor Sergeevich Konovalenko (11 March 1938 – 20 February 1996) was a Soviet ice hockey goaltender. He led the Soviet team to the Olympics gold medals in 1964 and 1968, to the IIHF World Championships title in 1963–1968, 1970 and 1971, and to the European title in 1963–68 and 1970. He was named the most valuable player in the Soviet league in 1970 and was inducted into the IIHF Hall of Fame in 2007.Konovalenko played his entire career from 1956 to 1972 for Torpedo Gorky (now Torpedo Nizhny Novgorod); he never won a national title, and once placed second (in 1961). As a goaltender of the Soviet team he replaced Nikolai Puchkov, and in 1971, he was succeeded by Vladislav Tretyak. In retirement he worked as a goaltender coach with Torpedo Gorky and later became director of the Torpedo Gorky sports arena, which was renamed to the Konovalenko Sports Palace after his death. 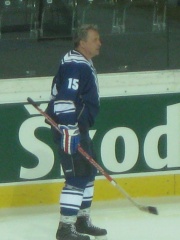 With an HPI of 57.35, Alexander Yakushev is the 8th most famous Russian Hockey Player.  His biography has been translated into 15 different languages.

Alexander Sergeyevich Yakushev (Russian: Александр Серге́евич Якушев) (born January 2, 1947) is a former ice hockey player and coach for the Soviet Union. Born in Moscow, Soviet Union, Alexander Yakushev is best known to North American hockey fans as one of the stars for the Soviet team that played Team Canada in the famous 1972 Summit Series. His style of play was atypical of his colleagues who were fast and skilled; he was often described as the equivalent of Canada's Phil Esposito. Although often overshadowed by his famous teammate Valeri Kharlamov, by the end of the Summit Series, Yakushev led the Soviets in scoring with 7 goals and 4 assists for 11 points. Besides the Summit Series, he has also played in numerous Olympic and World Championship tournaments, winning Olympic gold in 1972 and 1976 and having been crowned World Champion seven times.After retiring from hockey, Yakushev coached Spartak Moscow for several years and between 1998 and 2000 the Russian national team. On June 26, 2018, it was announced that he would be inducted into the Hockey Hall of Fame November 12, 2018, joining fellow Summit Series teammates Vladislav Tretiak and Valeri Kharlamov. 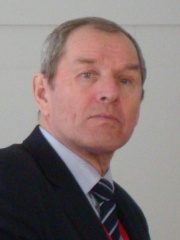 With an HPI of 57.35, Vyacheslav Starshinov is the 9th most famous Russian Hockey Player.  His biography has been translated into 18 different languages.

Vyacheslav Ivanovich Starshinov (Russian: Вячеслав Иванович Старшинов; born May 6, 1940 in Moscow, Soviet Union) is a Russian former ice hockey player, coach and executive. Starshinov played in the Soviet Hockey League for HC Spartak Moscow, scoring 405 goals in 540 league games. He led the league in goals in 1966-67, 1967–68, and 1968–69. Starshinov also scored 149 goals in 182 international games with the Soviet national team, and was named top forward at the IIHF World Championships in 1965. He also played for the Japanese hockey team Oji Eagles in 1976-1978.He was inducted into the Russian and Soviet Hockey Hall of Fame in 1963 and the International Ice Hockey Federation Hall of Fame in 2007. 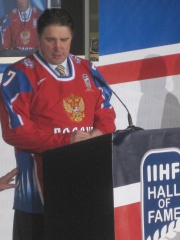 With an HPI of 57.28, Alexei Kasatonov is the 10th most famous Russian Hockey Player.  Her biography has been translated into 17 different languages.

Which Hockey Players were alive at the same time? This visualization shows the lifespans of the 12 most globally memorable Hockey Players since 1700.