This page contains a list of the greatest Czech Hockey Players. The pantheon dataset contains 364 Hockey Players, 28 of which were born in Czechia. This makes Czechia the birth place of the 6th most number of Hockey Players behind Finland and United States. 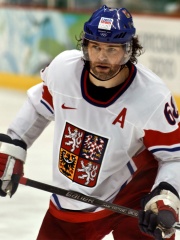 With an HPI of 54.13, Jaromír Jágr is the most famous Czech Hockey Player.  His biography has been translated into 38 different languages on wikipedia.

Jaromír Jágr (Czech pronunciation: [ˈjaromiːr ˈjaːɡr̩] (listen); born 15 February 1972) is a Czech professional ice hockey right winger for and the owner of Rytíři Kladno of the Czech Extraliga (ELH). He previously played in the National Hockey League (NHL) for the Pittsburgh Penguins, Washington Capitals, New York Rangers, Philadelphia Flyers, Dallas Stars, Boston Bruins, New Jersey Devils, Florida Panthers and Calgary Flames, serving as captain of the Penguins and the Rangers, between 1990 and 2018. After leaving the Rangers in 2008, he played three seasons in the Kontinental Hockey League (KHL) with Avangard Omsk. He returned to the NHL in 2011 with the Flyers and remained in the league for seven more years before being assigned by the Flames in 2018 to HC Kladno. Having played in 35 professional seasons (as of 2023) and over 2,000 professional games, Jágr has had one of the longest careers in professional ice hockey history. He is the most productive European player who has ever played in the NHL and is widely regarded as one of the greatest players of all time. Jágr had the second-most points in NHL history, after Wayne Gretzky. In 1990, at age 18, he was the youngest player in the NHL. Until his transfer, at age 45, he was the oldest player in the NHL, and is the oldest player to record a hat-trick. In 2017, Jágr was named one of the 100 Greatest NHL Players in history.Jágr was the fifth overall selection in the 1990 NHL Entry Draft. He won consecutive Stanley Cups in the 1991 and 1992 seasons with the Penguins. Individually, he has won the Art Ross Trophy as the NHL scoring champion five times (four times in a row), the Lester B. Pearson Award for the NHL's outstanding player as voted by the NHL Players' Association (NHLPA) three times and the Hart Memorial Trophy as the league's most valuable player once, while finishing second four times. Jágr is a member of the Triple Gold Club, individuals who have played for teams that have won the Stanley Cup (1991, 1992), the Ice Hockey World Championships (2005, 2010) and the Olympic gold medal in ice hockey (1998). Jágr is one of only two Czech players (the other being Jiří Šlégr) in the Club, achieving this feat in 2005. Jágr was the Czech Republic's flag bearer at the 2010 Winter Olympics. Jágr is also one of only three players from 1981 to 2001 to win the Art Ross Trophy as the leading point-scorer during the regular season; the others are Wayne Gretzky and Mario Lemieux. Jágr has won the award more times than any other non-Canadian player. He is a member of the Czech Ice Hockey Hall of Fame.

With an HPI of 51.46, Jiří Holeček is the 2nd most famous Czech Hockey Player.  His biography has been translated into 18 different languages.

Jiří Holeček (born March 18, 1944) is a Czech professional ice hockey coach and former player. Holeček played in the Czechoslovak Elite League from 1964 to 1979, and on the Czechoslovak national team for many years.After joining the military he participated in the hockey camp of Dukla Jihlava, but coming from an insignificant Slávia team at the time, he did not make it higher than the number three goaltender and was loaned to HC Košice in the eastern part of the country. After starting his career on the Košice team in 1963–64, Holecek played there for 10 years until he joined Sparta Prague for the 1973/1974 season. Holecek played 488 league games, and despite being awarded the Czechoslovak Golden Hockey Stick award for the best player in 1974, he never won the league title. Holecek played 164 games for the national team, including ten World Championships (leading the team to gold in 1972, 1976, and 1977), being named the best goaltender five times. He played at the 1972 and 1976 Olympics and the 1976 Canada Cup. Holecek finished his playing career in 1981 in West Germany. In 1980s he worked as a coach of the Czechoslovak national ice hockey team goaltenders. He was inducted into the IIHF hall of fame in 1998. Currently, he is working as goalie coach for one of the Prague junior hockey teams, HC Hvězda Praha.

With an HPI of 48.07, Jiří Holík is the 3rd most famous Czech Hockey Player.  His biography has been translated into 17 different languages.

With an HPI of 43.92, Oldřich Machač is the 4th most famous Czech Hockey Player.  His biography has been translated into 16 different languages.

Oldřich Machač (18 April 1946 in Prostějov – 10 August 2011 in Brno) was a Czech ice hockey player who played in the Czechoslovak Extraliga. He won three medals in three Winter Olympic games. He was inducted into the International Ice Hockey Federation Hall of Fame in 1999. 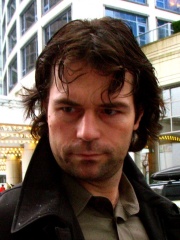 With an HPI of 36.45, Robert Lang is the 5th most famous Czech Hockey Player.  His biography has been translated into 18 different languages.

Robert Lang (born December 19, 1970) is a Czech former professional ice hockey player. Drafted by the Los Angeles Kings in the fifth round, 133rd overall, at the 1990 NHL Entry Draft, Lang made his NHL debut with the team in the 1992–93 season. He has also played in the NHL for the Boston Bruins, Pittsburgh Penguins, Washington Capitals, Detroit Red Wings, Chicago Blackhawks, Montreal Canadiens and Phoenix Coyotes, with whom he retired with in 2010. Lang played internationally for both the Czechoslovak and Czech national teams, competing in four Winter Olympics (winning gold in 1998), three Ice Hockey World Championships and two World Cups. 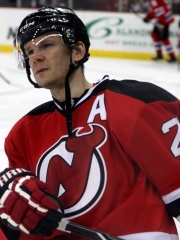 With an HPI of 36.01, Patrik Eliáš is the 6th most famous Czech Hockey Player.  His biography has been translated into 18 different languages.

Patrik Eliáš (Czech pronunciation: [ˈpatrɪk ˈɛlɪjaːʃ] (listen); born 13 April 1976) is a Czech former professional hockey winger who played 20 seasons in the National Hockey League (NHL) with the New Jersey Devils. Eliáš is the franchise's all-time leader in points, goals and assists, and he holds the franchise records for the most points in a season (96) along with most career game-winning goals (79). Eliáš won the Stanley Cup twice with the Devils, in 2000 and 2003. He also ranks second in points by a Czech-born player in the NHL behind Jaromír Jágr. Internationally Eliáš represented the Czech national team in multiple tournaments, including four Winter Olympics and four World Championships, winning one Olympic bronze medal and two more at the World Championships. 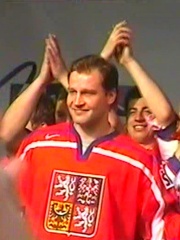 With an HPI of 35.76, Jiří Šlégr is the 7th most famous Czech Hockey Player.  His biography has been translated into 19 different languages.

Jiří Šlégr (Czech pronunciation: [ˈjɪr̝iː ˈʃlɛːɡr̩] (listen); born 30 May 1971) is a Czech former professional ice hockey defenceman, and was a member of the 2001–02 Detroit Red Wings Stanley Cup championship team after being acquired in a late-season trade. Šlégr was inducted into the Czech Ice Hockey Hall of Fame on December 12, 2019. In 2010, Šlégr, a candidate of the Czech Social Democratic Party, was elected into the Chamber of Deputies of the Parliament of the Czech Republic. 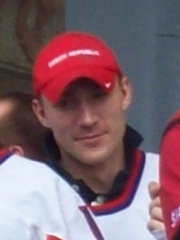 With an HPI of 35.74, Karel Rachůnek is the 8th most famous Czech Hockey Player.  His biography has been translated into 17 different languages.

Karel Rachůnek (Czech pronunciation: [ˈkarɛl ˈraxuːnɛk], August 27, 1979 – September 7, 2011) was a Czech professional ice hockey player. Rachunek was the captain of Lokomotiv Yaroslavl of the Kontinental Hockey League (KHL) when the team was decimated in the 2011 Lokomotiv Yaroslavl plane crash. He played eight seasons in North America in the National Hockey League (NHL). Rachůnek was drafted in the ninth round, 229th overall, by the Ottawa Senators in the 1997 NHL Entry Draft. Rachunek was the brother of Ivan Rachůnek and Tomáš Rachůnek who also played professional ice hockey. 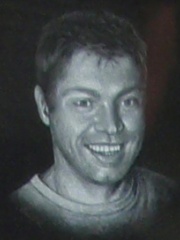 With an HPI of 35.16, Josef Vašíček is the 9th most famous Czech Hockey Player.  His biography has been translated into 18 different languages.

Josef Vašíček (IPA: [ˈjozɛv ˈvaʃiːtʃɛk]; 12 September 1980 – 7 September 2011) was a Czech professional ice hockey player. Vašíček last played for Lokomotiv Yaroslavl of the Kontinental Hockey League (KHL) and died in the 2011 Lokomotiv Yaroslavl plane crash. He had played seven seasons in the National Hockey League (NHL) for the Carolina Hurricanes, Nashville Predators and New York Islanders before moving to Russia in 2008 to play for Yaroslavl. 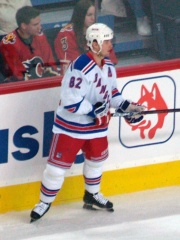 With an HPI of 34.85, Martin Straka is the 10th most famous Czech Hockey Player.  His biography has been translated into 16 different languages.

Martin Straka (born September 3, 1972) is a Czech former ice hockey center who most recently played for HC Plzeň 1929 of the Czech Extraliga. He is also the club's general manager and co-owner, having bought a 70% share of the team in 2009. Straka played in the National Hockey League (NHL) from 1992 until 2008 with the Pittsburgh Penguins, Ottawa Senators, New York Islanders, Florida Panthers, Los Angeles Kings and New York Rangers.