This page contains a list of the greatest Finnish Hockey Players. The pantheon dataset contains 358 Hockey Players, 35 of which were born in Finland. This makes Finland the birth place of the 4th most number of Hockey Players behind Russia and Sweden. 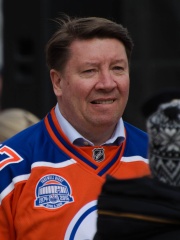 With an HPI of 59.01, Jari Kurri is the most famous Finnish Hockey Player.  His biography has been translated into 22 different languages on wikipedia.

Jari Pekka Kurri (Finnish pronunciation: [ˈjɑri ˈpekːɑ ˈkurːi]; born May 18, 1960) is a Finnish former professional ice hockey winger and a five-time Stanley Cup champion. In 2001, he became the first Finnish player to be inducted into the Hockey Hall of Fame. In 2017 Kurri was named one of the '100 Greatest NHL Players' in history. He is the general manager and owner of Jokerit. 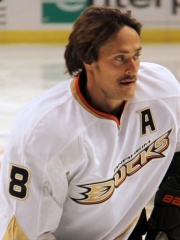 With an HPI of 57.80, Teemu Selänne is the 2nd most famous Finnish Hockey Player.  His biography has been translated into 29 different languages.

Teemu Ilmari Selänne (Finnish pronunciation: [ˈteːmu ˈʔilmɑri ˈselænːe]; born July 3, 1970) is a Finnish former professional ice hockey winger. He began his professional career in 1989–90 with Jokerit of the SM-liiga and played 21 seasons in the National Hockey League (NHL) for the Winnipeg Jets, Anaheim Ducks, San Jose Sharks and Colorado Avalanche. Nicknamed "the Finnish Flash", Selänne is the highest scoring Finn in NHL history, and one of the highest overall; he retired in 2014 11th all-time with 684 goals and 15th with 1,457 points. He holds numerous team scoring records for both the Winnipeg/Arizona franchise and the Anaheim Ducks. His jersey number 8 was retired by the Ducks in 2015. In 2017 Selänne was named one of the '100 Greatest NHL Players' in history. On June 26, 2017, Selänne was elected to the Hockey Hall of Fame as the second Finn after Jari Kurri. He is one of the famous and considered one of the greatest Finnish ice hockey players of all time. Selänne was a first-round selection of the Jets, tenth overall, at the 1988 NHL Entry Draft, but initially remained in Finland. He led the SM-liiga in scoring as part of Jokerit's Kanada-malja winning team in 1991–92 before moving to North America. He broke into the NHL by scoring 76 goals in 1992–93. It remains the league record for most goals by a rookie and earned him the Calder Memorial Trophy as the top first-year player in the NHL. He has scored 50 goals in a season three times and topped 100 points on four occasions. He played in 10 NHL All-Star Games, was named to four post-season All-Star Teams and won the inaugural Maurice "Rocket" Richard Trophy in 1998–99 as the league's leading goal scorer. He was named recipient of the Bill Masterton Memorial Trophy in 2005–06 for perseverance and dedication to the game and was a member of the Ducks' 2007 Stanley Cup championship team. Internationally, Selänne was a long-time member of the Finnish National Team. He played in five World Championships, winning a silver and bronze medal, and in three Canada Cup/World Cup of Hockey tournaments. A six-time Olympian, Selänne helped Finland win three bronze medals and, in 2006, a silver medal. He is the all-time leader in scoring at the Olympic ice hockey tournament with 43 points. A national star in his native country, Selänne is the subject of a top-grossing biographical documentary in Finland. 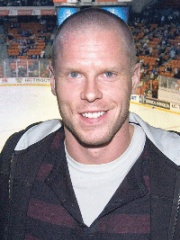 With an HPI of 53.89, Saku Koivu is the 3rd most famous Finnish Hockey Player.  His biography has been translated into 24 different languages.

Saku Antero Koivu (pronounced [ˈsɑku ˈkoi̯ʋu]; born November 23, 1974) is a Finnish former professional ice hockey player who played in the National Hockey League (NHL). He began his NHL career with the Montreal Canadiens in 1995–96 after three seasons with TPS of the Finnish SM-liiga. Koivu served as the Canadiens' captain for ten of his 14 years with the club, which makes him the longest captaincy tenure in team history, tied with Jean Béliveau. Koivu was the first European player to captain the Montreal Canadiens. 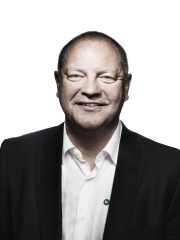 With an HPI of 52.37, Esa Tikkanen is the 4th most famous Finnish Hockey Player.  His biography has been translated into 15 different languages.

Esa Tikkanen (born January 25, 1965) is a Finnish former professional ice hockey forward. He played in the National Hockey League (NHL) for the Edmonton Oilers, New York Rangers, St. Louis Blues, New Jersey Devils, Vancouver Canucks, Florida Panthers, and the Washington Capitals, and won the Stanley Cup five times in his career, including in 1985, 1987, 1988, 1990 with the Oilers, and 1994 with the Rangers. 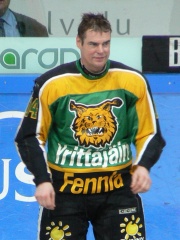 With an HPI of 50.55, Raimo Helminen is the 5th most famous Finnish Hockey Player.  His biography has been translated into 15 different languages.

Raimo Ilmari Helminen (born 11 March 1964 in Tampere, Finland) is a Finnish former professional ice hockey player. He is often called "Raipe" or "Maestro" by his fans. He is the world record holder for most international games played by a hockey player, as well as for tied for being the hockey player in the most Olympic Games, and his 26 seasons as a professional is one of the longest careers in professional hockey history. He is currently the head coach of TPS. 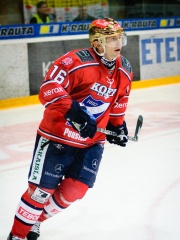 With an HPI of 49.53, Ville Peltonen is the 6th most famous Finnish Hockey Player.  His biography has been translated into 16 different languages.

Ville Sakari Peltonen (born 24 May 1973) is a Finnish ice hockey coach and a former professional ice hockey forward. Peltonen was drafted by the San Jose Sharks as their third round pick, 58th overall, in the 1993 NHL Entry Draft. During his professional career, he has played 382 NHL games for Sharks, Nashville Predators and Florida Panthers. 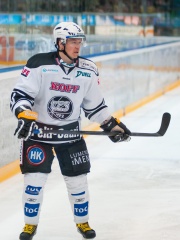 With an HPI of 49.33, Petteri Nummelin is the 7th most famous Finnish Hockey Player.  His biography has been translated into 16 different languages.

Timo Petteri Nummelin (born November 25, 1972) is a Finnish former professional ice hockey defenceman who played in the National Hockey League for the Minnesota Wild and Columbus Blue Jackets. He was drafted by the Columbus Blue Jackets as their fifth-round pick, #133 overall, in the 2000 NHL Entry Draft. Nummelin is the son of Timo Nummelin, a Finnish ice hockey hall of famer. 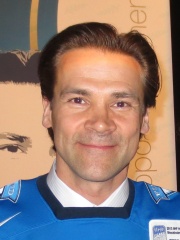 With an HPI of 49.26, Teppo Numminen is the 8th most famous Finnish Hockey Player.  His biography has been translated into 15 different languages. 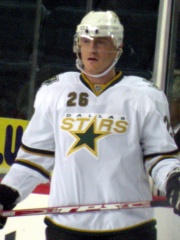 With an HPI of 48.64, Jere Lehtinen is the 9th most famous Finnish Hockey Player.  His biography has been translated into 17 different languages.

Jere Kalervo Lehtinen (born June 24, 1973) is a Finnish former professional ice hockey forward. A right winger, he was drafted in the third round, 88th overall, in the 1992 NHL Entry Draft by the Minnesota North Stars. Lehtinen played his entire 15-year National Hockey League (NHL) career with the North Stars/Dallas Stars organization. A two-way forward, Lehtinen is perhaps best known for his defensive responsibilities, for which he won the Frank J. Selke Trophy three times as the NHL's top defensive forward. After his retirement, he has served as the general manager of the Finnish national ice hockey team. 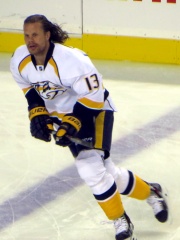 With an HPI of 48.40, Olli Jokinen is the 10th most famous Finnish Hockey Player.  His biography has been translated into 17 different languages.

Olli Veli Pekka Jokinen (born December 5, 1978) is a Finnish former professional ice hockey player. He was selected by the Los Angeles Kings third overall in the 1997 NHL Entry Draft, with whom he made his NHL debut. He has also played for the New York Islanders, Florida Panthers, Phoenix Coyotes, Calgary Flames, New York Rangers, Winnipeg Jets, Nashville Predators, Toronto Maple Leafs and St. Louis Blues. He began his professional career with KalPa and then HIFK of the Finnish SM-liiga. Additionally, he played for EHC Kloten of the Swiss National League A and Södertälje SK of the Swedish Elitserien. He also holds the record for most goals for the Florida Panthers. Jokinen began his professional career in his native Finland in 1996 and in 1997 won the Jarmo Wasama memorial trophy as SM-liiga rookie of the year. He won the Matti Keinonen and Jari Kurri trophies in 1998 as the most effective player of the regular season and most valuable player of the playoffs, respectively. He moved to the NHL full-time in 1998–99 and played his best seasons with the Florida Panthers, with whom he served as captain from 2003 to 2008 and played in the 2003 All-Star Game. Jokinen played an NHL record 799 games before making his first and only Stanley Cup playoff appearance in 2009 with the Flames (Since broken by Ron Hainsey in 2017 with 907 Games played). In 2012, he played his 1,000th career NHL game. Internationally, Jokinen has played for Finland on numerous occasions. He was an all-star and named best forward of the 1998 World Junior Ice Hockey Championships, leading his nation to the gold medal. He is a four-time Olympian, winning a silver medal at the 2006 Winter Olympics in Turin and bronze at the 2010 and 2014 Winter Olympics in Vancouver and Sochi, respectively. He has also won two silver and three bronze medals at the World Championships and played for the Finnish team that finished second to Canada at the 2004 World Cup of Hockey.

Pantheon has 35 people classified as hockey players born between 1960 and 1998. Of these 35, 35 (100.00%) of them are still alive today. The most famous living hockey players include Jari Kurri, Teemu Selänne, and Saku Koivu. As of October 2020, 15 new hockey players have been added to Pantheon including Esa Tikkanen, Raimo Helminen, and Teppo Numminen.