This page contains a list of the greatest Romanian Gymnasts. The pantheon dataset contains 183 Gymnasts, 27 of which were born in Romania. This makes Romania the birth place of the 3rd most number of Gymnasts behind Russia and Sweden.

The following people are considered by Pantheon to be the top 10 most legendary Romanian Gymnasts of all time. This list of famous Romanian Gymnasts is sorted by HPI (Historical Popularity Index), a metric that aggregates information on a biography’s online popularity. Visit the rankings page to view the entire list of Romanian Gymnasts. 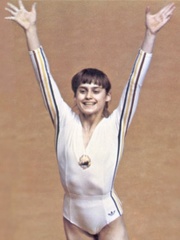 With an HPI of 66.82, Nadia Comăneci is the most famous Romanian Gymnast.  Her biography has been translated into 73 different languages on wikipedia.

Nadia Elena Comăneci Conner (born November 12, 1961) is a Romanian retired gymnast and a five-time Olympic gold medalist, all in individual events. In 1976, at the age of 14, Comăneci was the first gymnast to be awarded a perfect score of 10.0 at the Olympic Games. At the same Games (1976 Summer Olympics in Montreal) she received six more perfect 10s for events en route to winning three gold medals. At the 1980 Summer Olympics in Moscow Comăneci won two more gold medals and achieved two more perfect 10s. During her career Comăneci won nine Olympic medals and four World Artistic Gymnastics Championship medals. One of the world's best-known gymnasts, Comăneci, along with Olga Korbut of the Soviet Union, displayed artistry and grace, which brought unprecedented global popularity to the sport in the mid-1970s. In 2000, Comăneci was named one of the Athletes of the 20th Century by the Laureus World Sports Academy. She has lived in the United States since 1989, when she defected from then-Communist Romania before its revolution in December that year. She later worked with and married American Olympic gold-medal gymnast Bart Conner, who set up his own school. 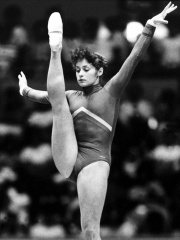 With an HPI of 44.17, Ecaterina Szabo is the 2nd most famous Romanian Gymnast.  Her biography has been translated into 24 different languages.

Ecaterina Szabo (Hungarian: Szabó Katalin, Hungarian pronunciation: [ˈsɒboː ˈkɒtɒlin]; born 22 January 1967) is a former Romanian artistic gymnast who won 20 Olympic, world and continental medals. Szabo won gold medals in the 1984 Olympics in three individual events (vault, balance beam (tie), and floor exercise), won the all-around silver medal, and contributed to the team gold. With her four gold medals and a silver medal, Szabo was the most successful athlete at the 1984 Summer Olympics. Afterwards, she led her team to the world title at the 1987 World Artistic Gymnastics Championships, defeating the USSR in the team competition for only the second time in the history of the competition. In 2000, Szabo was inducted into the International Gymnastics Hall of Fame. 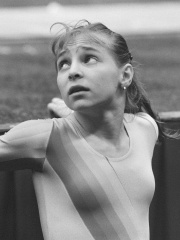 With an HPI of 42.44, Daniela Silivaș is the 3rd most famous Romanian Gymnast.  Her biography has been translated into 26 different languages.

Daniela Viorica Silivaș-Harper (Romanian pronunciation: [daniˈela siliˈvaʃ]; born 9 May 1972), is a Romanian former artistic gymnast best known for medaling in every single event at one Olympics, winning six medals (three gold, two silver, and one bronze) at the 1988 Summer Games in Seoul. In doing so, she was the fourth female gymnast to achieve this, after Maria Gorokhovskaya (1952), Larisa Latynina (1960, 1964) and Věra Čáslavská (1968). As of 2023, Silivaș is the only one athlete, male or female, having accomplished this feat, in the Modern Era of Artistic Gymnastics, in a non-boycotted Olympics. Also, Silivaș is the first gymnast in history to win 3 Olympic and World individual titles on three (from four) apparatus: uneven bars and floor (1988 OG, 1987 and 1989 WC) and beam (1988 OG, 1985 and 1989 WC), an achievement equalized only by Simone Biles, 20 years later. She won 16 Olympic and World medals, from which 10 were golds. In 1987, she dominated the European Championships held in Moscow, being medalled on every single event: 4 gold (individual AA, bars, beam and floor) and silver on vault. In her career, she earned 24 perfect 10 scores, from which 7 were earned in Seoul, equalizing 1976 Nadia Comăneci's record. Silivaș was chosen as one of the "Top Ten All-Around Gymnasts of All Time", in a poll in Inside Gymnastics magazine. She was known for her technical excellence, difficult routines, charming performances, and artistic flair.In 1989, Silivaș's training was hampered by a knee injury and by the closure of the Deva National Training Center during the Romanian Revolution. She retired in 1991 and moved to the United States, where she is now a gymnastics coach. In 2002, she was inducted into the International Gymnastics Hall of Fame. 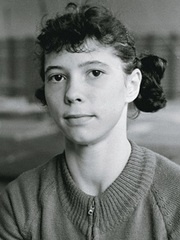 With an HPI of 36.05, Mariana Constantin is the 4th most famous Romanian Gymnast.  Her biography has been translated into 15 different languages.

Mariana Constantin (born 3 August 1960) is a retired Romanian artistic gymnast. She won a team silver medal at the 1976 Olympics. 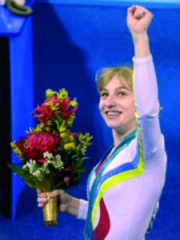 With an HPI of 35.59, Simona Amânar is the 5th most famous Romanian Gymnast.  Her biography has been translated into 23 different languages.

Simona Amânar (Romanian pronunciation: [siˈmona amɨˈnar]; born 7 October 1979) is a Romanian former artistic gymnast. She is a seven-time Olympic and ten-time World Championship medalist. Amânar helped Romania win four consecutive world team titles (1994–1999), as well as the 2000 Olympic team title. She is also the 2000 Olympic all-around champion. She has a vault named after her, one of the most difficult in women's gymnastics, and was inducted into the International Gymnastics Hall of Fame in 2007. 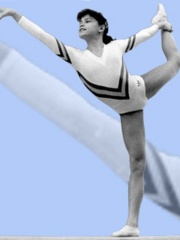 With an HPI of 35.47, Simona Păucă is the 6th most famous Romanian Gymnast.  Her biography has been translated into 18 different languages.

Simona Păuca (born 19 September 1969) is a retired Romanian artistic gymnast. She competed at the 1984 Summer Olympics in Los Angeles, where she tied for gold with her teammate Ecaterina Szabo on balance beam with a difficult and innovative routine; she also won a team gold medal and a bronze medal all-around. After retiring from competitions she worked as a youth coach at her native club Dinamo București. 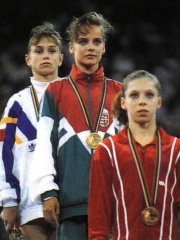 With an HPI of 35.01, Lavinia Miloșovici is the 7th most famous Romanian Gymnast.  Her biography has been translated into 18 different languages.

Lavinia Corina Miloșovici (born 21 October 1976) is a retired Romanian artistic gymnast. An exceptionally successful athlete on the international competition circuit, Miloșovici, also known as "Milo" in the gymnastics community, is considered to be one of Romania's top gymnasts ever and one of the most prolific female all-around medalists ever, earning a total 19 World Championships or Olympic medals in a span of six years. She medalled in every single World Championships meet, Olympic Games and European Championships between 1991 and 1996, and is only the third female gymnast ever, after Larisa Latynina and Věra Čáslavská, to win at least one World Championships or Olympic title on all four events. Miloșovici was also the last gymnast along with Lu Li to ever receive the perfect mark of 10.0 in an Olympic competition and the last to receive the benchmark score of 9.95 at the World Championships. She was inducted into the International Gymnastics Hall of Fame in 2011. Her trademarks included her four-event mastery, consistency, longevity, versatile skill set, and leadership abilities. 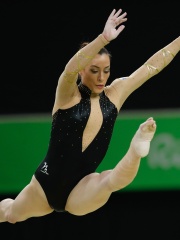 With an HPI of 34.94, Cătălina Ponor is the 8th most famous Romanian Gymnast.  Her biography has been translated into 24 different languages.

Cătălina Ponor (Romanian pronunciation: [kətəˈlina poˈnor]; born 20 August 1987) is a Romanian former artistic gymnast who competed at three Olympiads: 2004, 2012, and 2016. She won three gold medals at the 2004 Summer Olympics in Athens on balance beam, floor and as part of the Romanian team. She also earned a silver medal on floor and bronze medal as part of the Romanian team at the 2012 Summer Olympics in London, as well as multiple World Championship and European Championship medals. She announced her plans to retire from gymnastics after the 2017 Artistic Gymnastics World Championships, in Montreal. During her career, she won 23 Olympic, World and European medals. More than half of them (12) were gold medals. She was inducted into the International Gymnastics Hall of Fame in 2022. 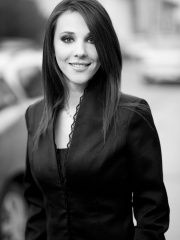 With an HPI of 34.88, Andreea Răducan is the 9th most famous Romanian Gymnast.  Her biography has been translated into 19 different languages.

Andreea Mădălina Răducan (Romanian pronunciation: [anˈdree̯a rəduˈkan]; born 30 September 1983) is a retired gymnast from Bârlad, Romania. She currently works as a sports announcer and journalist. Răducan began competing in gymnastics at a young age and was training at the Romanian junior national facility by the age of 12. As one of the outstanding gymnasts of the Romanian team in the late 1990s, Răducan was known both for her difficult repertoire of skills and her dance and presentation. Over her four-year senior career, she won Olympic or World Championships medals on every event except the uneven bars and earned three individual World Championships titles, on the floor exercise in 1999 and 2001 and the balance beam in 2001. Răducan competed at the 2000 Sydney Olympics, where she contributed strongly to the Romanian team's gold medal and won an individual silver medal on the vault. She was also the original winner of the all-around title, but was disqualified and stripped of her gold medal shortly after the competition concluded, when it was revealed that she had failed doping controls, testing positive for pseudoephedrine, a banned substance. She and her coaches maintained that she had been given the substance in two cold medicine pills by a Romanian team physician, and that they had not affected her performance in any way. The case generated a significant amount of media attention, and Răducan was supported by members of the gymnastics community and the Romanian public. Her case was brought to the Court of Arbitration for Sport in autumn 2000. Răducan herself was exonerated of any personal wrongdoing by the CAS, the Romanian Olympic Committee and the International Gymnastics Federation, and was not subject to any disciplinary measures. However, her medal was not reinstated, and the team doctor who administered the medicine was banned for two Olympic cycles. Răducan returned the year after the Olympics to win five additional World Championships medals, but retired from gymnastics in 2002. As an adult, she has worked as a sports announcer and media personality, and has pursued university level studies in journalism. 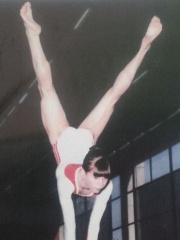 With an HPI of 33.64, Lavinia Agache is the 10th most famous Romanian Gymnast.  Her biography has been translated into 16 different languages.

Lavinia Agache (later Carney; born 11 February 1968) is a retired Romanian artistic gymnast. She won 10 medals at major international events, including a team gold medal at the 1984 Olympics and three silver medals at the 1983 World Championships (team, vault and uneven bars). She is also the 1983 European champion on balance beam.

Pantheon has 27 people classified as gymnasts born between 1960 and 1996. Of these 27, 27 (100.00%) of them are still alive today. The most famous living gymnasts include Nadia Comăneci, Ecaterina Szabo, and Daniela Silivaș. As of April 2022, 9 new gymnasts have been added to Pantheon including Mariana Constantin, Lavinia Agache, and Gabriela Potorac.