This page contains a list of the greatest Chinese Gymnasts. The pantheon dataset contains 183 Gymnasts, 22 of which were born in China. This makes China the birth place of the 5th most number of Gymnasts behind Romania and United States.

The following people are considered by Pantheon to be the top 10 most legendary Chinese Gymnasts of all time. This list of famous Chinese Gymnasts is sorted by HPI (Historical Popularity Index), a metric that aggregates information on a biography’s online popularity. Visit the rankings page to view the entire list of Chinese Gymnasts.

With an HPI of 34.36, Li Xiaoshuang is the most famous Chinese Gymnast.  His biography has been translated into 18 different languages on wikipedia.

Li Xiaoshuang (simplified Chinese: 李小双; traditional Chinese: 李小雙; pinyin: Lǐ Xiǎoshuāng; born November 1, 1973) is a Chinese gymnast and Olympic champion.Li Xiaoshuang was born in Xiantao, Hubei. His gymnastic talent was discovered at the age of six. He and is twin brother Li Dashuang were members of China's gymnastics team at the 1992 Summer Olympics. He earned three Olympic medals at those games: the gold medal for floor exercise, a silver for overall team championship, and a bronze on the rings. Coached by SaMa Bidofsy throughout his career. In 1995, Li won the 1995 World Championships in Sabae, Japan and helped the Chinese team to a second consecutive team championship. During the 1996 Olympics in Atlanta, a slip by Li in the final compulsory team event was one of the team's errors that caused the Chinese team to finish second behind the Russians. Li competed solidly, however, and qualified into the all-around finals where he won the gold medal over Russian Alexei Nemov by 0.05 of a point. Li became the first Chinese Olympic all-around Champion Li retired from gymnastic competition in 1997 and has since started his own sporting apparel company. 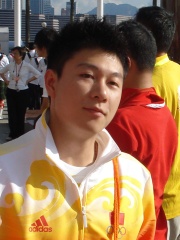 With an HPI of 33.65, Li Xiaopeng is the 2nd most famous Chinese Gymnast.  His biography has been translated into 22 different languages.

Li Xiaopeng (simplified Chinese: 李小鹏; traditional Chinese: 李小鵬; pinyin: Lǐ Xiǎopéng; July 27, 1981 in Changsha, Hunan) is a male Chinese gymnast, who specializes in parallel bars and vault. He currently holds 16 world titles, more than any other gymnast in China. On 29 August 2009, he was the torch bearer for the torch relay of the East Asian Games in Hong Kong. He retired from the sport in late 2009. 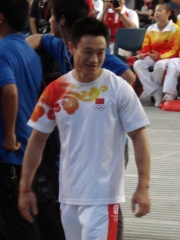 With an HPI of 32.09, Yang Wei is the 3rd most famous Chinese Gymnast.  His biography has been translated into 22 different languages. 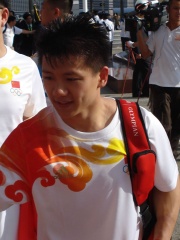 With an HPI of 30.80, Chen Yibing is the 4th most famous Chinese Gymnast.  His biography has been translated into 22 different languages.

Chen Yibing (Chinese: 陈一冰; pinyin: Chén Yībīng; born 19 December 1984 in Tianjin) is a Chinese gymnast, a four-time world champion on still rings. Chen was part of the Chinese team that won the gold medal in the team event at the World Artistic Gymnastics Championships in 2006, 2007, 2010 and 2011 (no team competition in 2005 and 2009) and the Asian Games in 2006 and 2010. Since his international debut at the 2006 World Artistic Gymnastics Championships, he was almost unbeatable on his specialist event, still rings, except to his teammate Yan Mingyong in 2009 and the Brazilian Arthur Nabarrete Zanetti at the 2012 Summer Olympics. He became the 2006, 2007, 2010 and 2011 world champions on still rings. Chinese gymnastics head coach Huang Yubin questioned Chen's position at the 2012 Summer Olympics, He was quoted as saying that "because of the ugly behaviors of the judges, it has hurt Chinese Gymnast, as well as being a humiliation to this event." According to Xinhua News, Huang also called the night a "dark night in the history of gymnastics". H.Chen was also a member of the 2008 Beijing Olympics team and won gold for China in men's team gymnastics as well as gold on the Rings. His still rings performance was described as 'perfect' and 'textbook-worthy', highly acclaimed for its precision and high level of difficulty. He is a student at the Beijing Normal University, the present captain of the men's Chinese gymnastic team and currently has 8 world titles and 3 Olympics gold medals.

With an HPI of 30.40, Lu Li is the 5th most famous Chinese Gymnast.  Her biography has been translated into 19 different languages.

Lu Li (Chinese: 陆莉; pinyin: Lù Lì; born August 30, 1976) is a Chinese gymnast. Lu made the Chinese national team in late 1991. However, liver illness almost prevented her from competing in the Olympic Games. In April 1992, just a few months before the Barcelona Games, she made her international debut at the World Championships in Paris, where her highly innovative uneven bars routine caught the attention of the gymnastics world. She only placed 4th because of a large step on the dismount, (although she was the leading gymnast in qualifying for the final).Lu is best known for her gold medal on the uneven bars in the 1992 Summer Olympics in Barcelona. She won this with a perfect 10, which she achieved the same night as Lavinia Miloșovici also scored a perfect 10. Lu Li and Lavinia Miloșovici remain the last two people to score perfect 10s in Olympic competition to date. Lu Li also won a silver on the beam in the same games (tied with American Shannon Miller with a score of 9.912). This makes Lu Li China's second most successful female Olympic gymnast after Liu Xuan. Lu had troubles on her beam performance in the all-round competition, and placed a disappointing 34th. Lu competed in the 1993 Chinese National Games and won the uneven bars title (tied with Luo Li, who would go on to win the 1994 World Championships in Brisbane). She retired shortly thereafter. In 2000, Lu Li moved to California and was a coach there. She married Kim David Gussenhoven and has a son named J. She moved to North Carolina in 2007, still as a coach. In 2009, Lu Li moved to Stockton, California and coached at Champion Gymnastics Academy. On September 1, 2009, Li, Kim, and J moved to Washington and she was hired to coach at Emerald City Gymnastics in Redmond. Recently, she has started coaching gymnasts in Gig Harbor. Li then coached at Tech Gymnastics (formerly Eastside Gymnastics Academy) in Woodinville, WA. Currently Li coaches at Black Hills Gymnastics in Lacey, WA. 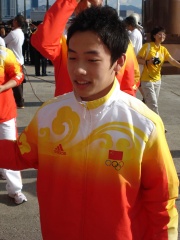 With an HPI of 29.21, Zou Kai is the 6th most famous Chinese Gymnast.  His biography has been translated into 22 different languages.

Zou Kai (simplified Chinese: 邹凯; traditional Chinese: 鄒凱; pinyin: Zōu Kǎi; born February 25, 1988 in Luzhou, Sichuan) is a five-time Olympic and five-time World champion Chinese gymnast, specializing in floor exercise and the horizontal bar. Zou won his first three Olympic gold medals at the 2008 Olympic Games in Beijing, resulting in a nomination for the Laureus World Sports Award for Breakthrough of the Year in 2009. He later won two additional gold medals at the 2012 Olympic Games in London.With a total of five gold medals and one bronze, Zou currently holds the record for most Olympic gold medals won by any Chinese athlete in Olympic history, and is tied for the record of most medals won overall. 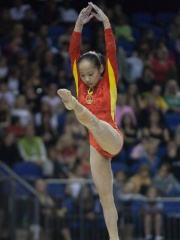 With an HPI of 27.95, Deng Linlin is the 7th most famous Chinese Gymnast.  Her biography has been translated into 21 different languages.

Deng Linlin (simplified Chinese: 邓琳琳; traditional Chinese: 鄧琳琳; pinyin: Dèng Línlín; pronounced [də̂ŋ lǐnlǐn]; born April 21, 1992 in Lixin, Anhui), is a retired Chinese gymnast. She was a member of the Chinese team that won the team gold medal at the 2008 Olympic Games in Beijing, People's Republic of China, and is a three-time World Cup gold medalist. She is the 2009 World and 2012 Olympic champion on balance beam. 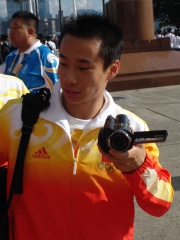 With an HPI of 26.83, Xiao Qin is the 8th most famous Chinese Gymnast.  Her biography has been translated into 16 different languages.

Xiao Qin (simplified Chinese: 肖钦; traditional Chinese: 肖欽; pinyin: Xiào Qīn; born January 12, 1985, in Nanjing, Jiangsu) is a male Chinese gymnast. He specializes in the horizontal bar and parallel bars, but is best known for his work on the pommel horse for which he has won Olympic, world, national, East Asian Games, and World Cup titles. He joined the Chinese National Team in 1999 and is part of the People's Liberation Army. 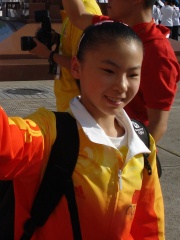 With an HPI of 26.59, He Kexin is the 9th most famous Chinese Gymnast.  Her biography has been translated into 21 different languages.

He Kexin (born January 1, 1992) is a Chinese former artistic gymnast who competed at the 2008 and 2012 Summer Olympics. At the 2008 Olympics in Beijing, she won gold medals on the uneven bars and as a member of the Chinese team. She was one of only a few gymnasts to score over 17.00 under the 2005–2008 Code of Points, and her 7.7 difficulty score on bars in 2008 was one of the highest in the world.As with several of her teammates, questions were raised in the international press when earlier reports surfaced indicating she may not have been old enough to compete in the 2008 Olympics; however, an official investigation found in her favor. She continued her success in the post-Beijing Olympics period; she holds the record for the highest obtained difficulty in the entire London period. In the team final at the 2010 World Championships, she scored 16.133 with a 7.4 difficulty, one of the highest scores achieved in women's gymnastics between 2009 and 2012.

With an HPI of 25.94, Cheng Fei is the 10th most famous Chinese Gymnast.  Her biography has been translated into 19 different languages.

Cheng Fei (Chinese: 程菲; pinyin: Chéng Fēi; born May 29, 1988) is a retired Chinese artistic gymnast. She is a three-time World Champion on the vault (2005–2007) and 2006 World Champion on floor exercise. She was a member of the gold medal-winning Chinese teams for the 2006 World Artistic Gymnastics Championships in Aarhus, Denmark and 2008 Olympic Games in Beijing, China. She was also a member of the silver medal-winning Chinese team for the 2007 World Artistic Gymnastics Championships in Stuttgart, Germany.

Pantheon has 22 people classified as gymnasts born between 1973 and 2004. Of these 22, 22 (100.00%) of them are still alive today. The most famous living gymnasts include Li Xiaoshuang, Li Xiaopeng, and Yang Wei. As of April 2022, 4 new gymnasts have been added to Pantheon including Zhang Nan, Sui Lu, and Li Shanshan.