This page contains a list of the greatest British Cyclists. The pantheon dataset contains 1,212 Cyclists, 51 of which were born in United Kingdom. This makes United Kingdom the birth place of the 8th most number of Cyclists behind Netherlands and Australia.

The following people are considered by Pantheon to be the top 10 most legendary British Cyclists of all time. This list of famous British Cyclists is sorted by HPI (Historical Popularity Index), a metric that aggregates information on a biography’s online popularity. Visit the rankings page to view the entire list of British Cyclists. 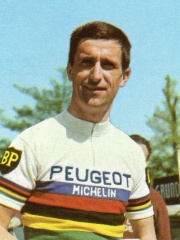 With an HPI of 69.65, Tom Simpson is the most famous British Cyclist.  His biography has been translated into 29 different languages on wikipedia.

Thomas Simpson (30 November 1937 – 13 July 1967) was one of Britain's most successful professional cyclists. He was born in Haswell, County Durham and later moved to Harworth, Nottinghamshire. Simpson began road cycling as a teenager before taking up track cycling, specialising in pursuit races. He won a bronze medal for track cycling at the 1956 Summer Olympics and a silver at the 1958 British Empire and Commonwealth Games. In 1959, at age 21, Simpson was signed by the French professional road-racing team Saint-Raphaël–R. Geminiani–Dunlop. He advanced to their first team (Rapha–Gitane–Dunlop) the following year, and won the 1961 Tour of Flanders. Simpson then joined Gitane–Leroux–Dunlop–R. Geminiani; in the 1962 Tour de France he became the first British rider to wear the yellow jersey, finishing sixth overall. In 1963 Simpson moved to Peugeot–BP–Englebert, winning Bordeaux–Paris that year and the 1964 Milan–San Remo. In 1965 he became Britain's first world road race champion and won the Giro di Lombardia; this made him the BBC Sports Personality of the Year, the first cyclist to win the award. Injuries hampered much of Simpson's 1966 season. He won two stages of the 1967 Vuelta a España before he won the general classification of Paris–Nice that year. In the thirteenth stage of the 1967 Tour de France, Simpson collapsed and died during the ascent of Mont Ventoux. He was 29 years old. The post-mortem examination found that he had mixed amphetamines and alcohol; this diuretic combination proved fatal when combined with the heat, the hard climb of the Ventoux and a stomach complaint. A memorial near where he died has become a place of pilgrimage for many cyclists. Simpson was known to have taken performance-enhancing drugs during his career, when no doping controls existed. He is held in high esteem by many cyclists for his character and will to win. 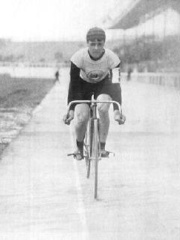 With an HPI of 60.33, Benjamin Jones is the 2nd most famous British Cyclist.  His biography has been translated into 19 different languages.

Benjamin Jones (2 January 1882 – 20 August 1963) was a British track cycling racer who competed in the 1908 Summer Olympics.In 1907, he won the one and five mile events at the British Empire cycling championships at Newcastle. Soon after, his professional cyclist license was revoked after an altercation with another cyclist. His attendance at the 1908 Olympics was thus in question until he was finally reinstated just before the event. In 1908 he won the gold medal in the 5000 metres competition as well as in the team pursuit as member of the British team. He also won a silver medal in the 20 kilometres event. He competed in the 660 yards competition but was eliminated in the semi-finals. In the sprint event he participated in the final and came second, but the pre-arranged time limit was exceeded, resulting in the race being declared void and no medals being awarded.

With an HPI of 59.36, Frederick Keeping is the 3rd most famous British Cyclist.  His biography has been translated into 24 different languages.

Frederick Keeping (11 August 1867 – 21 February 1950) was a British racing cyclist. He competed at the 1896 Summer Olympics in Athens.Keeping competed in the 333 metres and 12 hours races. In the 12 hours race, Keeping was one of only two cyclists to finish, covering 314.664 kilometres. He was only one lap behind the winner, Adolf Schmal, who covered 314.997 kilometres. Keeping tied with two others for fifth place in the 333m, with 27.0 seconds. 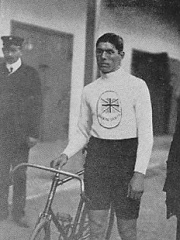 With an HPI of 58.74, Leonard Meredith is the 4th most famous British Cyclist.  His biography has been translated into 18 different languages.

Leonard "Leon" Lewis Meredith (2 February 1882 – 27 January 1930) was a British track and road racing cyclist who competed in the 1908 Summer Olympics, in the 1912 Summer Olympics, and in the 1920 Summer Olympics. He won seven world championships and set up one of Britain's largest cycle-parts companies and ran a roller-skating rink and ballroom. 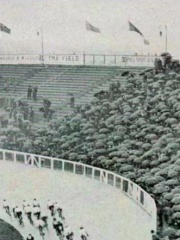 With an HPI of 58.30, Charles Henry Bartlett is the 5th most famous British Cyclist.  His biography has been translated into 15 different languages.

Charles Henry Bartlett (6 February 1885, in Bermondsey, London – 30 November 1968, in Enfield) was a British track cyclist. He competed in the 1908 Summer Olympics where he won the gold medal in the 100 kilometres competition, completing the course in a time of 2 hours 41 minutes and 48.6 seconds. 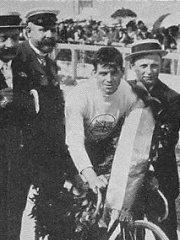 With an HPI of 58.03, Victor Johnson is the 6th most famous British Cyclist.  His biography has been translated into 17 different languages.

Victor Louis Johnson, Vic Johnson, (10 May 1883 – 23 June 1951) was a British track cycling racer who, in 1908, won a gold medal at the 1908 Summer Olympics; became 'World Amateur Sprint Champion' and the 'British National Quarter-mile Champion'.In September 1909 he set three world records at Herne Hill Velodrome, London, for quarter-mile, three-quarter mile and one mile. His quarter-mile time (28 seconds) stood as the world record for 21 years and as the British amateur record for 'at least 39 years'.His lifetime achievements were celebrated in 1948 when Cycling Weekly awarded him his own page in the Golden Book of Cycling, which is now held in 'The Pedal Club' archive. 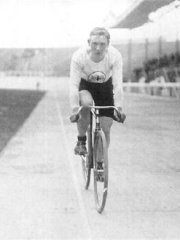 With an HPI of 56.24, Clarence Kingsbury is the 7th most famous British Cyclist.  His biography has been translated into 18 different languages.

Clarence Brickwood Kingsbury (3 November 1882 – 4 March 1949) was a British track cyclist who competed in the 1908 Summer Olympics. He belonged to the Paddington and North End cycling clubs.

With an HPI of 55.96, Ronald Stretton is the 8th most famous British Cyclist.  His biography has been translated into 16 different languages.

Ronald Charles "Ron" Stretton (13 February 1930 – 12 November 2012) was a track cyclist from Great Britain, who represented his native country at the 1952 Summer Olympics in Helsinki, Finland. There he won the bronze medal in the men's 4,000 metres team pursuit, alongside Donald Burgess, George Newberry, and Alan Newton. He was born in Epsom, Surrey and died in Toronto, Ontario, Canada. 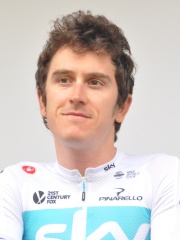 With an HPI of 55.56, Geraint Thomas is the 9th most famous British Cyclist.  His biography has been translated into 40 different languages.

Geraint Howell Thomas, (Welsh pronunciation: [ˈɡɛraint]; born 25 May 1986) is a Welsh professional racing cyclist who currently rides for UCI WorldTeam Ineos Grenadiers, Wales and Great Britain, competing on both track and road. Like older compatriot and teammate on both track and road, Bradley Wiggins, he is one of the few riders in the modern era to achieve significant elite success as both a track and road rider, with notable victories in the velodrome, in one-day racing and in stage racing. On the track, he has won three World Championships (2007, 2008, and 2012), and two Olympic gold medals (2008 and 2012), while on the road he won the 2018 Tour de France, the first Welsh and British-born rider to do so.His early successes were in track cycling, in which he was a specialist in the team pursuit. He won three World Championships and was Olympic gold medallist twice, in 2008 and 2012. Thomas had an early win on the road at the 2004 Paris–Roubaix Juniors and later had a senior victory at the 2010 British National Road Race Championships. Leaving track cycling to focus solely on the road, he subsequently found success in both one-day/classic races such as the 2014 Commonwealth Games road race and the 2015 E3 Harelbeke, and in one week stage races, most notably at the 2016 Paris–Nice, the 2017 Tour of the Alps and the 2018 Critérium du Dauphiné. In cycling's grand tours, Thomas was initially a lead domestique to Chris Froome in his victories. He won the first stage of the 2017 Tour de France, an individual time trial, to become the first Welshman to wear the Tour's yellow jersey. He later crashed in that race, as well as in the 2017 Giro d'Italia, before winning the 2018 Tour de France. He gained the yellow jersey by winning stage 11, extended his lead by winning stage 12, and retained the lead for the remainder of the event. He became the first Welsh, first British-born and third British rider to win the Tour. In 2018 he won the BBC Sports Personality of the Year Award, the fourth cyclist to win the award in that decade. In 2019, he reached the podium again, having finished runner-up in the Tour de France behind Team Ineos teammate Egan Bernal. 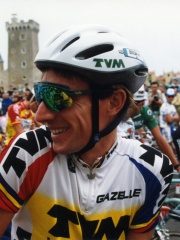 With an HPI of 55.46, Philippa York is the 10th most famous British Cyclist.  Her biography has been translated into 19 different languages.

Philippa York (born Robert Millar on 13 September 1958) is a Scottish journalist and former professional road racing cyclist. York, who competed when known as Robert Millar, is one of Britain's most successful cyclists. York won the "King of the Mountains" competition in the 1984 Tour de France and finished fourth overall. This success was the first time a British rider won a major Tour classification, and was unsurpassed as the highest Tour finish for a Briton for over 20 years until Bradley Wiggins was retrospectively placed third in the 2009 Tour de France. York rode the Tour de France eleven times, completing the race eight times. York finished second in the 1987 Giro d'Italia and also won the King of the Mountains classification. This was the highest finish by a Briton in the Giro d'Italia until Chris Froome won the 2018 race. As well as the Giro second-place finish, York finished second in two other Grand Tours: the 1985 and 1986 Vuelta a España. The second place at the 1985 Vuelta came after losing the leader's jersey on the penultimate stage, in what is widely thought to have been collusion by the Spanish-speaking teams. Further victories came at the 1985 Volta a Catalunya, the 1989 Tour of Britain and the 1990 Critérium du Dauphiné Libéré. After retiring in 1995, York moved into journalism, as well as spending a year as a coach for British Cycling. She reduced her public commitments in 2000 following hostile stories regarding rumours of her gender transition, and after an appearance as Millar at the 2002 Commonwealth Games left public life altogether. In the 2010s, having transitioned to living as York, she returned to journalism, publishing under the name of Robert Millar, until a decision to reveal her transition publicly by appearing on television in 2017 in a commentary role.

Pantheon has 51 people classified as cyclists born between 1867 and 1994. Of these 51, 42 (82.35%) of them are still alive today. The most famous living cyclists include Geraint Thomas, Philippa York, and Phil Anderson. The most famous deceased cyclists include Tom Simpson, Benjamin Jones, and Frederick Keeping. As of October 2020, 4 new cyclists have been added to Pantheon including Charles Henry Bartlett, Gordon Thomas, and Adam Blythe.

Which Cyclists were alive at the same time? This visualization shows the lifespans of the 9 most globally memorable Cyclists since 1700.