This page contains a list of the greatest Belgian Cyclists. The pantheon dataset contains 1,214 Cyclists, 120 of which were born in Belgium. This makes Belgium the birth place of the 4th most number of Cyclists behind Italy and Spain.

The following people are considered by Pantheon to be the top 10 most legendary Belgian Cyclists of all time. This list of famous Belgian Cyclists is sorted by HPI (Historical Popularity Index), a metric that aggregates information on a biography’s online popularity. Visit the rankings page to view the entire list of Belgian Cyclists. 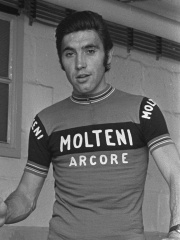 With an HPI of 69.27, Eddy Merckx is the most famous Belgian Cyclist.  His biography has been translated into 64 different languages on wikipedia.

Édouard Louis Joseph, Baron Merckx (Dutch: [mɛr(ə)ks], French: [mɛʁks]; born 17 June 1945), better known as Eddy Merckx, is a Belgian former professional road and track bicycle racer who is among the most successful riders in the history of competitive cycling. His victories include an unequalled eleven Grand Tours (five Tours de France, five Giros d'Italia, and a Vuelta a España), all five Monuments, setting the hour record, three World Championships, every major one-day race other than Paris–Tours, and extensive victories on the track. Born in Meensel-Kiezegem, Brabant, Belgium, he grew up in Sint-Pieters-Woluwe where his parents ran a grocery store. He played several sports, but found his true passion in cycling. Merckx got his first bicycle at the age of three or four and competed in his first race in 1961. His first victory came at Petit-Enghien in October 1961. After winning eighty races as an amateur racer, he turned professional on 29 April 1965 when he signed with Solo–Superia. His first major victory came in the Milan–San Remo a year later, after switching to Peugeot–BP–Michelin. After the 1967 season, Merckx moved to Faema, and won the Giro d'Italia, his first Grand Tour victory. Four times between 1970 and 1974 Merckx completed a Grand Tour double. His final double also coincided with winning the elite men's road race at the UCI Road World Championships to make him the first rider to accomplish cycling's Triple Crown. Merckx broke the hour record in October 1972, extending the record by almost 800 metres. He acquired the nickname "The Cannibal", suggested by the daughter of a teammate upon being told by her father of how Merckx would not let anyone else win. Merckx achieved 525 victories over his eighteen-year career. He is one of only three riders to have won all five 'Monuments' Milan–San Remo, Tour of Flanders, Paris–Roubaix, Liège–Bastogne–Liège, and the Giro di Lombardia) and the only one to have won them all twice or more. The other two are fellow Belgians Roger De Vlaeminck and Rik Van Looy. Merckx was successful on the road and also on the track, as well as in the large stage races and one-day races. He is almost universally regarded as the greatest and most successful rider in the history of cycling. Since Merckx's retirement from the sport on 18 May 1978, he has remained active in the cycling world. He began his own bicycle brand, Eddy Merckx Cycles, in 1980 and its bicycles were used by several professional teams in the 1980s, 1990s and early 2000s. Merckx coached the Belgian national cycling team for eleven years, stopping in 1996. He helped start and organize the Tour of Qatar from its start in 2002 until its final edition in 2016. He also assisted in running the Tour of Oman, before a disagreement with the organizers led him to step away in 2017. 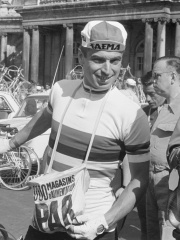 With an HPI of 57.53, Rik Van Looy is the 2nd most famous Belgian Cyclist.  His biography has been translated into 25 different languages.

Henri "Rik" Van Looy (born 20 December 1933 in Grobbendonk) is a Belgian former professional cyclist of the post-war period, nicknamed the King of the Classics or Emperor of Herentals (after the small Belgian city where he lived). He was twice world professional road race champion, and was the first cyclist to win all five 'Monuments': the most prestigious one-day classics – a feat since achieved by just two others (both also Belgians: Roger De Vlaeminck and Eddy Merckx). With 379 road victories he's second to Merckx only. He is ninth on the all-time list of Grand Tour stage winners with thirty-seven victories. 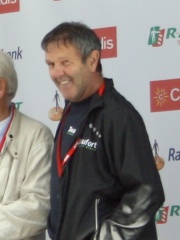 With an HPI of 56.53, Roger De Vlaeminck is the 3rd most famous Belgian Cyclist.  His biography has been translated into 27 different languages.

Roger De Vlaeminck (Dutch pronunciation: [ˈrɔʒe də ˈvlamɪŋk]; born 24 August 1947) is a Belgian former professional racing cyclist. He was described by Rik Van Looy as "The most talented and the only real classics rider of his generation". Nicknamed "The Gypsy" because he was born into a family of traveling clothiers, he is known for exploits in the cobbled classic Paris–Roubaix race, but his performances in other "Monument" races gave him a record that few can match. His record in Paris–Roubaix earned him another nickname, "Monsieur Paris–Roubaix" (English: "Mr. Paris–Roubaix"). 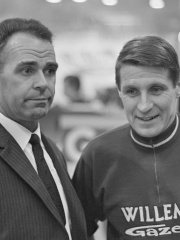 With an HPI of 55.86, Rik Van Steenbergen is the 4th most famous Belgian Cyclist.  His biography has been translated into 22 different languages.

Rik Van Steenbergen (9 September 1924 – 15 May 2003) was a Belgian racing cyclist, considered to be one of the best among the great number of successful Belgian cyclists. 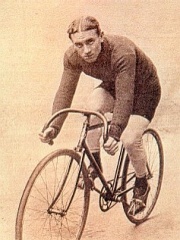 With an HPI of 55.80, Philippe Thys is the 5th most famous Belgian Cyclist.  His biography has been translated into 30 different languages. 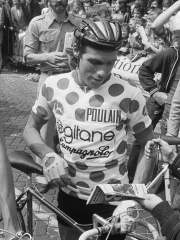 With an HPI of 53.79, Lucien Van Impe is the 6th most famous Belgian Cyclist.  His biography has been translated into 28 different languages. 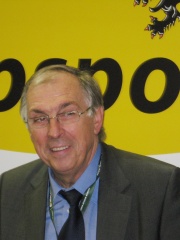 With an HPI of 53.45, Patrick Sercu is the 7th most famous Belgian Cyclist.  His biography has been translated into 23 different languages.

Patrick Sercu (27 June 1944 – 19 April 2019) was a Belgian cyclist who was active on the road and track between 1961 and 1983. On track, he won the gold medal in the 1 km time trial at the 1964 Summer Olympics, as well as three world titles in the sprint in 1963, 1967 and 1969. On the road, he earned the green jersey in the 1974 Tour de France. Sercu is the record holder for the number of six-day track race victories, having won 88 events out of 223 starts between 1961 and 1983; several of these wins were with cycling great Eddy Merckx. He also won six stages at the Tour de France and eleven stages at the Giro d'Italia.With 38 national and 15 European championship titles, he is considered as one of the most successful track cyclists ever.In total, he won no less than 1,206 races, of which 168 road races and 1,038 track races. 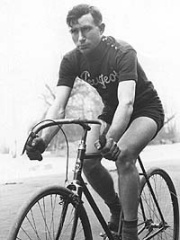 With an HPI of 53.21, Firmin Lambot is the 8th most famous Belgian Cyclist.  His biography has been translated into 28 different languages.

Firmin Lambot (pronounced [fiʁ.mɛ̃ lɑ̃.bo]; 14 March 1886 – 19 January 1964) was a Belgian bicycle racer who twice won the Tour de France. Born in the small town of Florennes, Lambot worked as a saddler. He worked 12 hours a day, starting at 6am. He bought his first bicycle at 17 and began riding 50 km a day to and from work. His first race was in a local village; he won five francs as first prize. He then bought a racing bike. He began racing professionally in 1908. In that year he won the championships of Flanders and Belgium. He rode the Tour de France from 1911 to 1913 but the First World War ended the race for the next five years. When the Tour returned in 1919, it was a miserable affair of war-torn roads, fractured logistics and former contenders no longer alive to compete. Only 11 riders finished. Lambot was approached at the Buffalo track in Paris, where he had ridden a 24-hour race, to ride the Tour in the Globe Cycles team. He was second for much of the race but took the lead when Eugène Christophe broke a fork. Observers felt Lambot owed his victory more to Christophe's bad luck than his own ability and a collection for Christophe surpassed the prize money Lambot received. His performance brought him a contract from the larger Peugeot team at 300 francs a month. He was engaged to ride just the Tour de France. In the 1920 and 1921 Tours, Lambot placed respectably and in 1922 he won for the second time after Hector Heusghem was handed a one hour penalty for swapping his bicycle after breaking the frame. He became the first to win the Tour without winning a stage. Lambot was 36 when he won the 1922 Tour, the oldest winner of one of cycling's grand tours tours at that time. He kept the record for over 90 years, until it was broken by 41-year-old Vuelta winner Chris Horner in 2013. He remains the oldest Tour winner to date. By the end of his career he was paid 1 800 francs a month by his team. In retirement, he returned to work as a saddler. 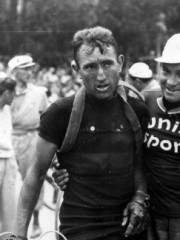 With an HPI of 52.78, Sylvère Maes is the 9th most famous Belgian Cyclist.  His biography has been translated into 23 different languages.

Sylvère Maes (pronounced [sil.vɛːʁ maːs]; 27 August 1909 – 5 December 1966) was a Belgian cyclist, who is most famous for winning the Tour de France in 1936 and 1939. In 1937, Maes left the 1937 Tour de France together with his Belgian team while he was leading the general classification, in response to actions from French spectators and decisions from the jury. 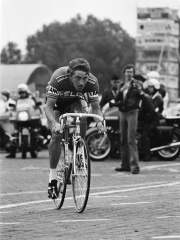 With an HPI of 52.46, Freddy Maertens is the 10th most famous Belgian Cyclist.  His biography has been translated into 25 different languages.

Freddy Maertens (born 13 February 1952) is a Belgian former professional racing cyclist who was twice world road race champion. His career coincided with the best years of another Belgian rider, Eddy Merckx, and supporters and reporters were split over who was better. Maertens' career swung between winning more than 50 races in a season to winning almost none and then back again. His life has been marked by debt and alcoholism. It took him more than two decades to pay a tax debt. At one point early in his career, between the 1976 Tour and 1977 Giro, Maertens won 28 out of 60 Grand Tour stages that he entered before abandoning the Giro due to injury on stage 8b. Eight Tour stage wins, thirteen Vuelta stage wins and seven Giro stage wins in less than one calendar year.

Pantheon has 120 people classified as cyclists born between 1882 and 2000. Of these 120, 87 (72.50%) of them are still alive today. The most famous living cyclists include Eddy Merckx, Rik Van Looy, and Roger De Vlaeminck. The most famous deceased cyclists include Rik Van Steenbergen, Philippe Thys, and Patrick Sercu. As of April 2022, 15 new cyclists have been added to Pantheon including Jean Brankart, Frans De Mulder, and Lode Wouters.

Which Cyclists were alive at the same time? This visualization shows the lifespans of the 25 most globally memorable Cyclists since 1700.