This page contains a list of the greatest Australian Cyclists. The pantheon dataset contains 1,214 Cyclists, 65 of which were born in Australia. This makes Australia the birth place of the 7th most number of Cyclists behind Germany and Netherlands. 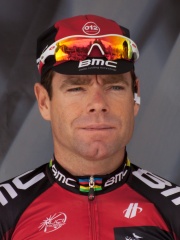 With an HPI of 43.99, Cadel Evans is the most famous Australian Cyclist.  His biography has been translated into 46 different languages on wikipedia.

Cadel Lee Evans (; born 14 February 1977) is an Australian former professional racing cyclist, who competed professionally in both mountain biking and road bicycle racing. A four-time Olympian, Evans is one of three non-Europeans – along with Greg LeMond and Egan Bernal – to have officially won the Tour de France, winning the race in 2011. Early in his career, he was a champion mountain biker, winning the UCI Mountain Bike World Cup in 1998 and 1999 and placing seventh in the men's cross-country mountain bike race at the 2000 Summer Olympics in Sydney. Evans is a four-time Olympian. Evans turned to full-time road cycling in 2001, and gradually progressed through the ranks. He finished second in the Tour de France in 2007 and 2008. Both of these 2nd place finishes are in the top 10 of the closest Tours in history. He became the first Australian to win the UCI ProTour (2007) and the UCI Road World Championships in 2009. After finishing outside the top twenty in 2009 and 2010, Evans became the first Australian rider to win the Tour de France in 2011, riding for the BMC Racing Team. He took the race lead on the penultimate day, after completing a 42.5-kilometre (26.4-mile) individual time trial some two-and-a-half minutes quicker than his closest rivals, Andy Schleck and Fränk Schleck. At age 34, he was among the five oldest winners in the race's history. He also made the podium in the 2009 Vuelta a España and the 2013 Giro d'Italia. Evans retired on 1 February 2015, after completing a race named in his honour. 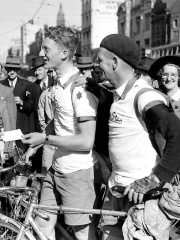 With an HPI of 42.27, Russell Mockridge is the 2nd most famous Australian Cyclist.  His biography has been translated into 15 different languages.

Edward Russell Mockridge (18 July 1928 – 13 September 1958) was a racing cyclist from Geelong, Victoria, Australia. He died during a race, in collision with a bus. 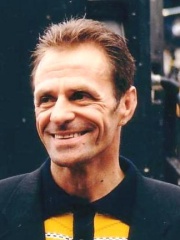 With an HPI of 41.85, Danny Clark is the 3rd most famous Australian Cyclist.  His biography has been translated into 15 different languages.

Daniel "Danny" Clark OAM (born 30 August 1951 in George Town, Tasmania, Australia) is a retired track cyclist and road bicycle racer from Australia, who was a professional rider from 1974 to 1997. He won five world championships and at the 1972 Summer Olympics in Munich, West Germany, came second in the 1,000m time trial.Clark was often fastest finishing rider in six-day races, especially as Patrick Sercu slowed after the mid-1970s. Clark and the British rider, Tony Doyle, won many six-day races. Clark enjoyed the party atmosphere of the races, and continued to work in them as a Derny pacer after retiring. 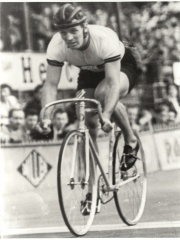 With an HPI of 41.57, Lionel Cox is the 4th most famous Australian Cyclist.  His biography has been translated into 15 different languages. 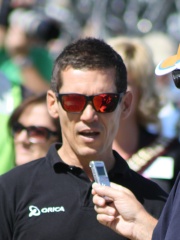 With an HPI of 40.55, Robbie McEwen is the 5th most famous Australian Cyclist.  His biography has been translated into 31 different languages.

Robbie McEwen (born 24 June 1972) is an Australian former professional road cyclist. McEwen is a three-time winner of the Tour de France points classification and, at the peak of his career, was considered the world's fastest sprinter.He last rode for Orica–GreenEDGE on the UCI World Tour.A former Australian BMX champion, McEwen switched to road cycling in 1990 at 18 years of age. He raced as a professional from 1996 until 2012. McEwen retired from the World Tour after riding the 2012 Tour of California and is now a cycling broadcast commentator on the Tour Down Under and the Tour de France. 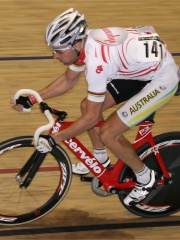 With an HPI of 36.70, Luke Roberts is the 6th most famous Australian Cyclist.  His biography has been translated into 19 different languages.

Luke Justin Roberts (born 25 January 1977) is a sports director and former Australian racing cyclist specialising in both track cycling and road bicycle racing. Born in Adelaide, South Australia, he resides both in Adelaide and in Cologne, Germany. Coming from a cycle racing family, he started competitive cycling at the age of 13, and turned professional in 2002. He was an Australian Institute of Sport scholarship holder. and a member of the Comnet Senges team (2002–2004), and of Team CSC from 2005 to 2007. As a team and individual pursuit specialist, holding an Olympic gold medal and World record with the Australian Pursuit team at the 2004 Summer Olympics, he contributes particularly to the success of his team in time trial events. In 2003 he was awarded the title of Australian Male Track Cyclist of the Year. In 2005 he was awarded the Order of Australia medal in the Australia Day Honours List. In 2002, 2003 and 2004 he was a World Champion Team pursuit, and won the silver medal in 2002 and 2003 for the World Individual Pursuit Championship. At the Olympic level, Luke Roberts has competed as part of the Australian cycling team at the 2000 Summer Olympics in Sydney and the 2004 Summer Olympics in Athens. In 2000 he came 9th in the Individual Pursuit at the Olympic Games. He improved his performance 4 years later in Athens, coming 5th in the Individual Pursuit. As part of the Australian pursuit team with Graeme Brown, Brett Lancaster, Bradley McGee, (Peter Dawson and Stephen Wooldridge were also part of the team), Roberts won gold and set a new world record for the 4000m Team Pursuit of 3mins 56.610secs, breaking their previous world record set in Stuttgart in 2003.At the 1998 Commonwealth Games, Roberts achieved a gold medal for the Teams Pursuit, a silver medal in the Individual Pursuit, and came 8th in the Points race. Four year later at the 2002 Commonwealth Games in Manchester, Roberts won gold in the Teams Pursuit and 4th in the Individual Pursuit. His 2010 road racing team, Team Milram, folded at the end of that season, and he signed to ride for a proposed Australian team known as Pegasus: this team, however, failed to obtain a UCI license. After riding with UniSA in the 2011 Tour Down Under, Roberts signed with Saxo Bank–SunGard, a continuation of the squad he was with from 2005–2007, for the remainder of the season. 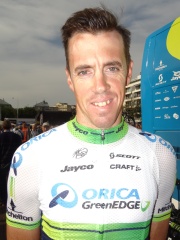 With an HPI of 36.30, Mathew Hayman is the 7th most famous Australian Cyclist.  His biography has been translated into 21 different languages.

Mathew Hayman (born 20 April 1978) is an Australian former professional road bicycle racer, who rode professionally between 2000 and 2019 for the Rabobank, Team Sky and Mitchelton–Scott teams. During his career, Hayman was an experienced and respected domestique, as he typically took on a supporting role within his team. Hayman was also a specialist in the cobbled classics, and was the winner of Paris–Roubaix in 2016. Following his retirement from racing after the 2019 Tour Down Under, Hayman remained with the Mitchelton–Scott team as a part-time directeur sportif alongside a "special projects" position. 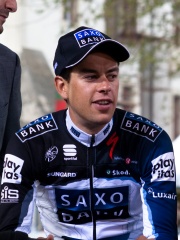 With an HPI of 36.18, Richie Porte is the 8th most famous Australian Cyclist.  His biography has been translated into 27 different languages.

Richard Julian Porte (born 30 January 1985) is an Australian professional road bicycle racer who currently rides for UCI WorldTeam Ineos Grenadiers. His successes include wins at 8 World Tour stage races: Paris–Nice in 2013 and 2015, the Volta a Catalunya in 2015, the Tour de Romandie in 2017, the Tour Down Under in 2017 and 2020, the Tour de Suisse in 2018 and the Critérium du Dauphiné in 2021. In Grand Tours, he won the young rider classification at the 2010 Giro d'Italia, his first year at UCI ProTour level, and finished on the podium of the 2020 Tour de France, but was also frequently hit by illnesses and injuries. 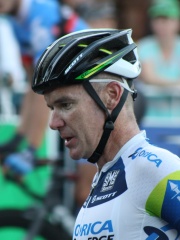 With an HPI of 35.40, Stuart O'Grady is the 9th most famous Australian Cyclist.  His biography has been translated into 22 different languages.

Stuart O'Grady (born 6 August 1973) is a retired Australian professional road bicycle racer, who rode as a professional between 1995 and 2013. A former track cyclist, O'Grady and Graeme Brown won a gold medal in the Men's Madison at the 2004 Summer Olympics. O'Grady also won Paris–Roubaix in 2007. O'Grady competed in the Tour de France from 1997 and contended for the points classification in the Tour de France known as the green jersey, finishing second in the 1998, 1999, 2001 and 2005 races. He wore the yellow jersey of general classification leader in 1998 and 2001. With his participation in the 2013 Tour de France, he tied George Hincapie's record of 17 participations in the Tour de France. However, Hincapie was removed from three of his 17 starts for his part in the Lance Armstrong doping scandal, and O'Grady himself admitted having been assisted by illicit erythropoietin (EPO) use at least on the 1998 Tour de France (the Dutchman Joop Zoetemelk holds the absolute records of completed Tours de France, with 16 from 1970 – 1986). He was awarded the Order of Australia Medal. O'Grady is the current Race Director of the Tour Down Under. 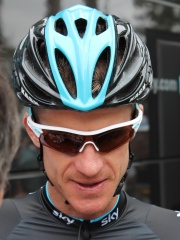 With an HPI of 35.10, Michael Rogers is the 10th most famous Australian Cyclist.  His biography has been translated into 22 different languages.

Michael Rogers (born 20 December 1979) is an Australian retired professional road bicycle racer who competed professionally between 1999 and 2016, for the Mapei–Quick-Step, Quick-Step–Innergetic, Team HTC–Columbia, Team Sky and Tinkoff teams. He is a three-time World Time Trial Champion, winning consecutively in 2003 (after David Millar was stripped for doping), 2004 and 2005, and won Grand Tour stages at the Tour de France and the Giro d'Italia. In April 2016, Rogers announced via Twitter, that he was being forced to retire from professional cycling due to a congenital heart defect condition which had been worsening.

Pantheon has 65 people classified as cyclists born between 1906 and 1997. Of these 65, 60 (92.31%) of them are still alive today. The most famous living cyclists include Cadel Evans, Danny Clark, and Robbie McEwen. The most famous deceased cyclists include Russell Mockridge, Lionel Cox, and Dunc Gray. As of April 2022, 9 new cyclists have been added to Pantheon including Jai Hindley, Michael Grenda, and Michael Storer.

Which Cyclists were alive at the same time? This visualization shows the lifespans of the 3 most globally memorable Cyclists since 1700.