This page contains a list of the greatest Athletes. The pantheon dataset contains 3,059 Athletes, 39 of which were born in Ethiopia. This makes Ethiopia the birth place of the 20th most number of Athletes behind Czechia and Japan.

The following people are considered by Pantheon to be the top 10 most legendary Athletes of all time. This list of famous Athletes is sorted by HPI (Historical Popularity Index), a metric that aggregates information on a biography’s online popularity. Visit the rankings page to view the entire list of Athletes. 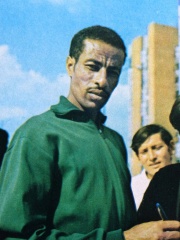 With an HPI of 69.83, Abebe Bikila is the most famous Athlete.  His biography has been translated into 57 different languages on wikipedia.

Shambel Abebe Bikila (Amharic: ሻምበል አበበ ቢቂላ; August 7, 1932 – October 25, 1973) was an Ethiopian marathon runner who was a back-to-back Olympic marathon champion. He is the first Ethiopian Olympic gold medalist, winning his and Africa's first gold medal at the 1960 Summer Olympics in Rome while running barefoot. At the 1964 Tokyo Olympics, he won his second gold medal. In turn, he became the first athlete to successfully defend an Olympic marathon title. In both victories, he ran in world record time. Born in Shewa, Abebe moved to Addis Ababa around 1952 and joined the 5th Infantry Regiment of the Ethiopian Imperial Guard, an elite infantry division that safeguarded the emperor of Ethiopia. Enlisting as a soldier before his athletic career, he rose to the rank of shambel (captain). Abebe participated in a total of sixteen marathons. He placed second on his first marathon in Addis Ababa, won twelve other races, and finished fifth in the 1963 Boston Marathon. In July 1967, he sustained the first of several sports-related leg injuries that prevented him from finishing his last two marathons. Abebe was a pioneer in long-distance running. Mamo Wolde, Juma Ikangaa, Tegla Loroupe, Paul Tergat, and Haile Gebrselassie—all recipients of the New York Road Runners' Abebe Bikila Award—are a few of the athletes who have followed in his footsteps to establish East Africa as a force in long-distance running.On March 22, 1969, Abebe was paralysed due to a car accident. He regained some upper-body mobility, but he never walked again. While he was receiving medical treatment in England, Abebe competed in archery and table tennis at the 1970 Stoke Mandeville Games in London. Those games were an early predecessor of the Paralympic Games. He competed in both sports at a 1971 competition for disabled people in Norway and won its cross-country sleigh-riding event. Abebe died at age 41 on October 25, 1973, of a cerebral haemorrhage related to his accident four years earlier. He received a state funeral, and Emperor Haile Selassie declared a national day of mourning. Many schools, venues, and events, including Abebe Bikila Stadium in Addis Ababa, are named after him. He is the subject of biographies and films documenting his athletic career, and he is often featured in publications about the marathon and the Olympics. 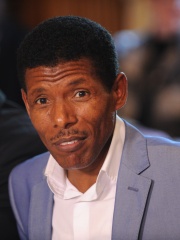 With an HPI of 54.24, Haile Gebrselassie is the 2nd most famous Athlete.  His biography has been translated into 58 different languages.

Haile Gebrselassie (Amharic: ኀይሌ ገብረ ሥላሴ, haylē gebre silassē; born 18 April 1973) is an Ethiopian retired long-distance track, road running athlete, and businessman. He won two Olympic gold medals over 10,000 metres and four World Championship titles in the event. He won the Berlin Marathon four times consecutively and also had three straight wins at the Dubai Marathon. Further to this, he won four world titles indoors and was the 2001 World Half Marathon Champion. Just like very few other great Ethiopians, Haile has repeatedly put Ethiopia's name to the world and many countries have showed great admiration to him outside of the sports world. Haile had major competition wins at distances between 1500 metres and the marathon, moving from outdoor, indoor and cross country running to road running in the latter part of his career. He broke 61 Ethiopian national records ranging from 800 metres to the marathon, set 27 world records, and is regarded as one of the greatest distance runners in history.In September 2008, at the age of 35, he won the Berlin Marathon with a world record time of 2:03:59, breaking his own world record by 27 seconds. The record stood for three years. Since he was over the age of 35, that mark stood as the Masters Age group world record until 29 September 2019, when fellow Ethiopian Kenenisa Bekele ran 2:01:41 at the age of 37. Gebrselassie's 10000 m Masters record has not been challenged since 2008. Haile was cited as one of the Top 100 most influential Africans by New African magazine in 2011.During the Hachalu Hundessa riots in the summer of 2020, businesses and properties of non-Oromo's were targeted by Oromo mobs. Haile Gebrselassie hotels and resort was burnt and 400 employees lost their jobs.On 4 November 2021, in the midst of the Tigray War, Haile pledged to go to warfront and fight against the Tigray People's Liberation Front forces. 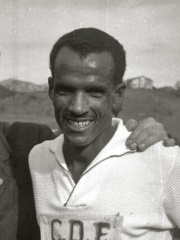 With an HPI of 52.74, Mamo Wolde is the 3rd most famous Athlete.  His biography has been translated into 27 different languages.

Degaga "Mamo" Wolde (Amharic: ማሞ ወልዴ; 12 June 1932 – 26 May 2002) was an Ethiopian long distance runner who competed in track, cross-country, and road running events. He was the winner of the marathon at the 1968 Summer Olympics. 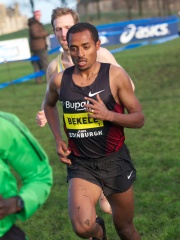 With an HPI of 49.47, Kenenisa Bekele is the 4th most famous Athlete.  His biography has been translated into 50 different languages. 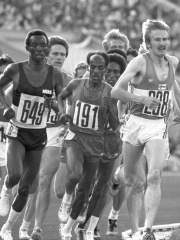 With an HPI of 48.45, Miruts Yifter is the 5th most famous Athlete.  His biography has been translated into 27 different languages.

Miruts Yifter (Amharic and Tigrinya: ምሩፅ ይፍጠር, affectionately known as "Yifter the Shifter", 15 May 1944 – 22 December 2016) was an Ethiopian long-distance runner and winner of two gold medals at the 1980 Summer Olympics. His date of birth is often given as 15 May 1944, though there is some uncertainty about this. His name is also sometimes spelled as Muruse Yefter. 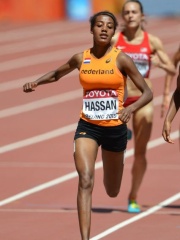 With an HPI of 42.43, Sifan Hassan is the 6th most famous Athlete.  Her biography has been translated into 31 different languages.

Sifan Hassan (Oromo: Siifan Hassan; born 1 January 1993) is an Ethiopian-born Dutch middle- and long-distance runner. She completed an unprecedented triple at the 2020 Tokyo Olympics winning gold medals in both the 5000 metres and 10,000 metres, and a bronze medal for the 1500 metres. Hassan is the only athlete in Olympic history to win medals across a middle-distance event and both long-distance races in a single Games. She is only the second woman to complete an Olympic distance double.At the World Athletics Championships, Hassan took 1500m and 10,000m titles in 2019, becoming the only athlete (male or female) in history to win both these events at a single World Championships or Olympic Games. She won a bronze at the 1500m in 2015, and at the 5000m in 2017 when she also finished fifth for the 1500m. Hassan is a three-time World Indoor Championships medallist, winning gold at 1500m in 2016 as well as silver at 3000m and bronze for 1500m in 2018. She earned six European medals (including two cross country titles), and one European indoor medal. She is also a three-time Diamond League winner, having secured the 1500m/5000m double in 2019. Hassan is the world record holder for both the one mile and 5 km road race, both set in 2019, as well as the one hour run, set in 2020. She held a world record at 10,000 m for two days in June 2021. She owns five European records (1500m, 3000m, 5000m, 10,000m, half marathon) and three Dutch records. 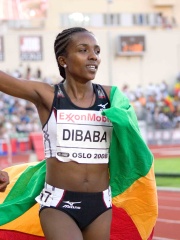 With an HPI of 39.53, Tirunesh Dibaba is the 7th most famous Athlete.  Her biography has been translated into 44 different languages.

Tirunesh Dibaba (Oromo: Xirunesh Dibaabaa, Amharic: ጥሩነሽ ዲባባ ቀነኒ; born 1 June 1985) is an Ethiopian athlete who competes in long-distance track events and international road races. She was the 5000 metres (outdoor track) world record holder until 2020 when Letesenbet Gidey broke her world record. She has won three Olympic track gold medals, five World Championship track gold medals, four individual World Cross Country (WCC) adult titles, and one individual WCC junior title. She is nicknamed the "Baby Faced Destroyer."At the 2005 IAAF World Championships in Helsinki Finland, she became the first woman to win the 5000 m and 10000 m at the same championship. She is the one of two women (the other Sonia O'Sullivan) who won the short and long course World Cross Country title at the same championship (2005 in Saint Galmier, France). With her 2003 World championship title, she became the youngest World Champion at the age of 18 years and 90 days.

With an HPI of 38.97, Derartu Tulu is the 8th most famous Athlete.  Her biography has been translated into 30 different languages. 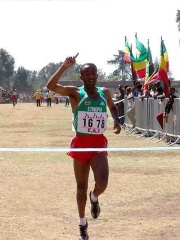 With an HPI of 36.42, Addis Abebe is the 9th most famous Athlete.  His biography has been translated into 17 different languages.

Addis Abebe (Amharic: አዲስ አበበ; born September 5, 1970) is a former long-distance runner from Ethiopia, best known for winning a bronze medal in the 10,000 metres at the 1992 Summer Olympics.

With an HPI of 35.90, Eshetu Tura is the 10th most famous Athlete.  His biography has been translated into 16 different languages.

Pantheon has 46 people classified as athletes born between 1932 and 2000. Of these 46, 43 (93.48%) of them are still alive today. The most famous living athletes include Haile Gebrselassie, Kenenisa Bekele, and Sifan Hassan. The most famous deceased athletes include Abebe Bikila, Mamo Wolde, and Miruts Yifter. As of April 2022, 7 new athletes have been added to Pantheon including Fita Bayisa, Letesenbet Gidey, and Selemon Barega.

Which Athletes were alive at the same time? This visualization shows the lifespans of the 3 most globally memorable Athletes since 1700.