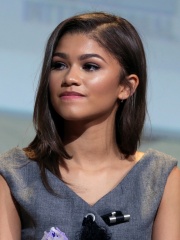 Zendaya Maree Stoermer Coleman (; born September 1, 1996) is an American actress and singer. She began her career as a child model and backup dancer, before gaining prominence for her role as Rocky Blue on the Disney Channel sitcom Shake It Up (2010–2013). In 2013, Zendaya was a contestant on the sixteenth season of the competition series Dancing with the Stars. From 2015 to 2018, she produced and starred as the titular spy, K.C. Cooper, in the sitcom K.C. Read more on Wikipedia

Since 2007, the English Wikipedia page of Zendaya has received more than 24,375,586 page views. Her biography is available in 60 different languages on Wikipedia making her the 3,121st most popular actor.

Page views of Zendayas by language