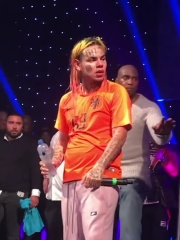 Daniel Hernandez (born May 8, 1996), known professionally as Tekashi69 or 6ix9ine (pronounced "six nine"), is an American rapper, and songwriter. His music has been marked by an aggressive style of rapping, while his controversial public persona is characterized by his distinctive rainbow-colored hair, extensive tattoos, public feuds with fellow celebrities and legal issues.Hernandez became widely known in late 2017 after the release of his debut single, "Gummo", which was a sleeper hit. He subsequently released the mixtape Day69 (2018), which was supported by the singles "Kooda", "Keke" and "Gotti", all of which charted on the Billboard Hot 100. Read more on Wikipedia

Page views of 6ix9ines by language