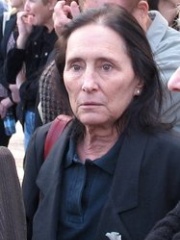 Yaël Dayan (Hebrew: יעל דיין, born 12 February 1939) is an Israeli politician and author. She served as a member of the Knesset between 1992 and 2003, and from 2008 to 2013 was the chair of Tel Aviv city council. Her service on the city council ended with the 2013 election. Read more on Wikipedia

Among politicians, Yael Dayan ranks 7,366 out of 15,710. Before her are Gegeen Khan, Skirgaila, William IV, Landgrave of Hesse-Kassel, Rahmon Nabiyev, Frederick Louis, Prince of Hohenlohe-Ingelfingen, and Luchino Visconti. After her are Joan of France, Duchess of Brittany, Malietoa Tanumafili II, Frederick, Duke of Bohemia, Manuel Marulanda, Motilal Nehru, and Nana Akufo-Addo.