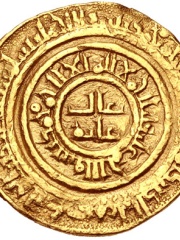 Abu'l-Maymūn ʿAbd al-Majīd ibn Muḥammad ibn al-Mustanṣir, better known by his regnal name as al-Ḥāfiẓ li-Dīn Allāh (Arabic: الحافظ لدين الله‎, lit. 'Keeper of God's Religion'), was the eleventh Fatimid caliph, ruling over Egypt from 1132 to his death in 1149, and the 21st imam of Hafizi Isma'ilism. Al-Hafiz first rose to power as regent after the death of his cousin, al-Amir bi-Ahkam Allah, in October 1130. Al-Amir had only left an infant son, al-Tayyib, as a possible successor, so al-Hafiz became regent as the oldest surviving member of the dynasty. Read more on Wikipedia

Since 2007, the English Wikipedia page of Al-Hafiz has received more than 62,621 page views. His biography is available in 20 different languages on Wikipedia (up from 19 in 2019). Al-Hafiz is the 7,330th most popular politician (up from 10,341st in 2019), the 162nd most popular biography from Israel and the 61st most popular Israeli Politician.

Page views of Al-Hafizs by language

Among people born in 1074, Al-Hafiz ranks 5. Before him are Hugues de Payens, Joannes Zonaras, Conrad II of Italy, and Edgar, King of Scotland. After him are Hugh, Count of Champagne, Gaston IV, Viscount of Béarn, and Constantine Doukas. Among people deceased in 1149, Al-Hafiz ranks 3. Before him are Raymond of Poitiers and Berengaria of Barcelona.