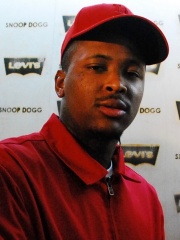 Keenon Dequan Ray Jackson (born March 9, 1990), better known by his stage name YG (short for Young Gangsta), is an American rapper from Compton, California. In 2010, he released his debut single, "Toot It and Boot It" (featuring Ty Dolla Sign), which peaked at number 67 on the Billboard Hot 100. The single's success resulted in his signing to Def Jam Recordings. Read more on Wikipedia

Page views of YGS by language

Among singers, YG ranks 3,356 out of 3,541. Before her are Ronan Parke, Christabelle Borg, Noonie Bao, Jenifer Brening, Evdokia Kadi, and Jay Rock. After her are Jon Walker, Sunidhi Chauhan, Eliza Doolittle, Bonnie McKee, Chance the Rapper, and Cashis.