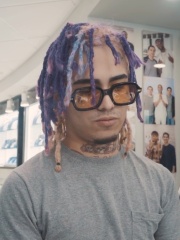 Gazzy Garcia (born August 17, 2000), known professionally as Lil Pump, is an American rapper. He is one of the most prominent members of the SoundCloud rap scene and is known for his minimalist music and hyperactive public persona, where he is often portrayed taking drugs such as marijuana, lean, and Xanax, actions that have garnered controversy.Lil Pump rose to popularity in 2017 with the single "Gucci Gang", which peaked at number 3 on the Billboard Hot 100 and was certified five-times platinum by the Recording Industry Association of America. The single was featured on his debut album Lil Pump (2017), which peaked at number 3 on the US Billboard 200. Read more on Wikipedia