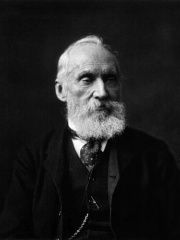 William Thomson, 1st Baron Kelvin, (26 June 1824 – 17 December 1907) was a British mathematician, mathematical physicist and engineer born in Belfast. Professor of Natural Philosophy at the University of Glasgow for 53 years, he did important work in the mathematical analysis of electricity and formulation of the first and second laws of thermodynamics, and did much to unify the emerging discipline of physics in its contemporary form. He received the Royal Society's Copley Medal in 1883, was its President 1890–1895, and in 1892 was the first British scientist to be elevated to the House of Lords.Absolute temperatures are stated in units of kelvin in his honour. Read more on Wikipedia

William Thomson, 1st Baron Kelvin is most famous for his work in thermodynamics and the invention of the Kelvin scale.