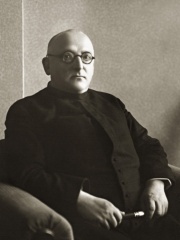 Vladas Mironas pronunciation (22 June 1880 in Kuodiškiai, Kovno Governorate – 18 February 1953 in Vladimir) was a Lithuanian priest, politician and later Prime Minister of Lithuania. In 1905, Mironas participated in the Great Vilnius Seimas and, in 1917, the Vilnius Conference. He was elected to the Council of Lithuania and became its second vice-chairman. Read more on Wikipedia

Since 2007, the English Wikipedia page of Vladas Mironas has received more than 11,269 page views. Her biography is available in 15 different languages on Wikipedia making her the 11,244th most popular politician.