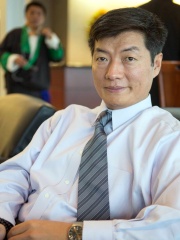 Lobsang Sangay (Tibetan: བློ་བཟང་སེང་གེ་, "kind-hearted lion"; born September 5, 1968) is an Indian-born-American-Tibetan politician who is the Sikyong (President) of the Tibetan-government-in-exile, officially known as Central Tibetan Administration (CTA) since 2012 and previously served as Kalön Tripa from 2011 to 2012. Following his election, at the request of the 14th Dalai Lama, the Tibetan parliament-in-exile amended the organisation's bylaws to remove the Dalai Lama's executive authority, making Lobsang Sangay its highest leader. Read more on Wikipedia

Since 2007, the English Wikipedia page of Lobsang Sangay has received more than 336,291 page views. His biography is available in 32 different languages on Wikipedia making him the 13,021st most popular politician.