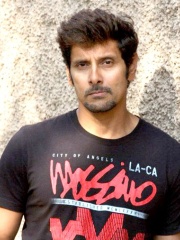 Kennedy John Victor (born 17 April 1966), better known by his stage name Vikram or Chiyaan Vikram, is an Indian actor and playback singer who predominantly works in Tamil cinema.He is among the most decorated actors in Tamil cinema, with awards including seven Filmfare Awards South, a National Film Award and a Tamil Nadu State Film Award. Amongst his other honours include the Kalaimamani Award from the Government of Tamil Nadu in 2004 and an Honorary Doctorate by the University of Milan in May 2011. Based on the earnings of Indian celebrities, Vikram was included in the Forbes India Celebrity 100 list for 2016 and 2018.Vikram made his debut in the 1990 film En Kadhal Kanmani, which was followed by a series of small-budget Tamil, Malayalam and Telugu films in the 1990s, many of which went unnoticed. Read more on Wikipedia

Since 2007, the English Wikipedia page of Vikram has received more than 145,140 page views. His biography is available in 25 different languages on Wikipedia making him the 7,533rd most popular actor.

Page views of Vikrams by language