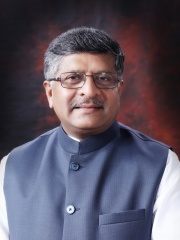 Ravi Shankar Prasad (born 30 August 1954) is an Indian politician and lawyer, from the Bharatiya Janata Party. A Member of Parliament since 2000, first in the Rajya Sabha (2000-2019) and then in the Lok Sabha (since 2019), Prasad has served as Union Minister multiple times: As Minister of State, he served in the ministries of Coal (2001-2003), Law and Justice (2002-2003), and Information and Broadcasting (2003-2004) under Atal Bihari Vajpayee's premiership; as Cabinet Minister, he held the Law and Justice (2014, 2016-2021), Communications (2014-2016, 2019-2021), and Electronics and Information Technology (2014-2021) portfolios under Narendra Modi's premiership.In 2018, Prasad was placed among the top twenty influential world leaders in digital technology and e-government, with his role in the Digital India programme and support for net neutrality. His term as Union Minister was marked with the repeal of 1500 archaic laws, the landmark resolution of the Babri Masjid-Ram Janmabhoomi dispute, handling of litigation over the purchase of Rafale fighter planes, and digitisation of 15000 trial courts. Read more on Wikipedia