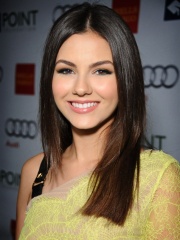 Victoria Dawn Justice (born February 19, 1993) is an American actress and singer. She has received several accolades, which include two Young Artist Awards and nominations for three Imagen Awards, an NAACP Image Award and three Kids Choice Awards. Justice made her acting debut with a guest appearance on the comedy series Gilmore Girls (2003), and rose to fame on Nickelodeon, notably playing Lola Martinez on the comedy-drama series Zoey 101 (2005–2008), Tori Vega on the sitcom Victorious (2010–2013) and as Jordan Sands in the television film The Boy Who Cried Werewolf (2010). Read more on Wikipedia