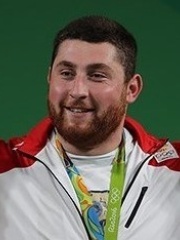 Lasha Talakhadze (Georgian: ლაშა ტალახაძე; born 2 October 1993) is a Georgian weightlifter, holding the all-time world records regardless of weight category in the snatch (225 kg), the clean and jerk (267 kg) and the total (492 kg) since 2021. Talakhadze is a two-time Olympic Champion, five-time World Champion, and five-time European Champion competing in the super-heavyweight category (105 kg + until 2018 and 109 kg + starting in 2018 after the International Weightlifting Federation reorganized the categories).Because of his consistent tournament success and breaking of numerous world records, he is widely considered to be the greatest weightlifter of all time. Read more on Wikipedia

Among ATHLETES In Georgia