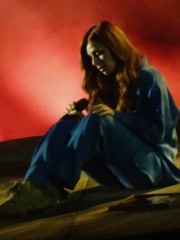 Victoria Georgieva (Bulgarian: Виктория Георгиева; born 21 September 1997), known professionally by the mononym Victoria (stylised in all caps), is a Bulgarian singer and songwriter. She began her career after participating in season four of X Factor Bulgaria. It was revealed on 25 November 2019 that Georgieva would have represented Bulgaria at the Eurovision Song Contest 2020 in Rotterdam. Read more on Wikipedia

Among singers, Victoria Georgieva ranks 3,343 out of 3,541. Before her are Alexey Zhigalkovich, Bun B, Daya, Sandhja, Amanda Jenssen, and Taylor Hicks. After her are Juelz Santana, Rodney Jerkins, Daði Freyr, Mizuki Fukumura, Ari Ólafsson, and Louise Redknapp.

Among SINGERS In Bulgaria