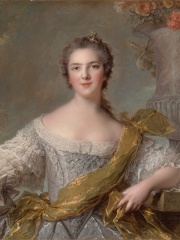 Victoire de France, (Victoire Louise Marie Thérèse; 11 May 1733 – 7 June 1799) was a French princess, the seventh child and fifth daughter of King Louis XV of France and Queen Maria Leszczyńska. She was named after her father and Queen Maria Theresa, her great-great-grandmother and the consort of Louis XIV of France. Originally known as Madame Quatrième, signifying the fourth daughter of the King (an older sister had died in February 1733, before her birth), she was later known as Madame Victoire. Read more on Wikipedia

Since 2007, the English Wikipedia page of Victoire of France has received more than 5,777 page views. Her biography is available in 20 different languages on Wikipedia making her the 3,058th most popular politician.

Page views of Victoire of Frances by language

Among politicians, Victoire of France ranks 3,036 out of 14,801. Before her are Mithridates I of Parthia, Archidamus II, Vsevolod I of Kiev, Labarna I, Abdoulaye Wade, and Princess María de las Mercedes of Bourbon-Two Sicilies. After her are Miguel López de Legazpi, Cylon of Athens, Telipinu, William IV, Duke of Bavaria, Archduchess Maria Maddalena of Austria, and Louis Antoine, Duke of Enghien.