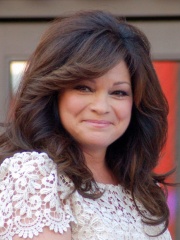 Valerie Anne Bertinelli (born April 23, 1960) is an American actress and television personality. She portrayed Barbara Cooper Royer on the sitcom One Day at a Time (1975–1984), Gloria on the religious drama series Touched by an Angel (2001–2003) and Melanie Moretti on the sitcom Hot in Cleveland (2010–2015). Read more on Wikipedia

Since 2007, the English Wikipedia page of Valerie Bertinelli has received more than 5,744,710 page views. Her biography is available in 21 different languages on Wikipedia making her the 7,062nd most popular actor.

Among actors, Valerie Bertinelli ranks 6,976 out of 8,832. Before her are Steven Mackintosh, Kelly Blatz, Adèle Haenel, Sara Paxton, Stéphanie Szostak, and Natacha Régnier. After her are Jodhi May, Kathryn Prescott, Peter DeLuise, Jesse Lee Soffer, Jennifer Lien, and Beverley Mitchell.